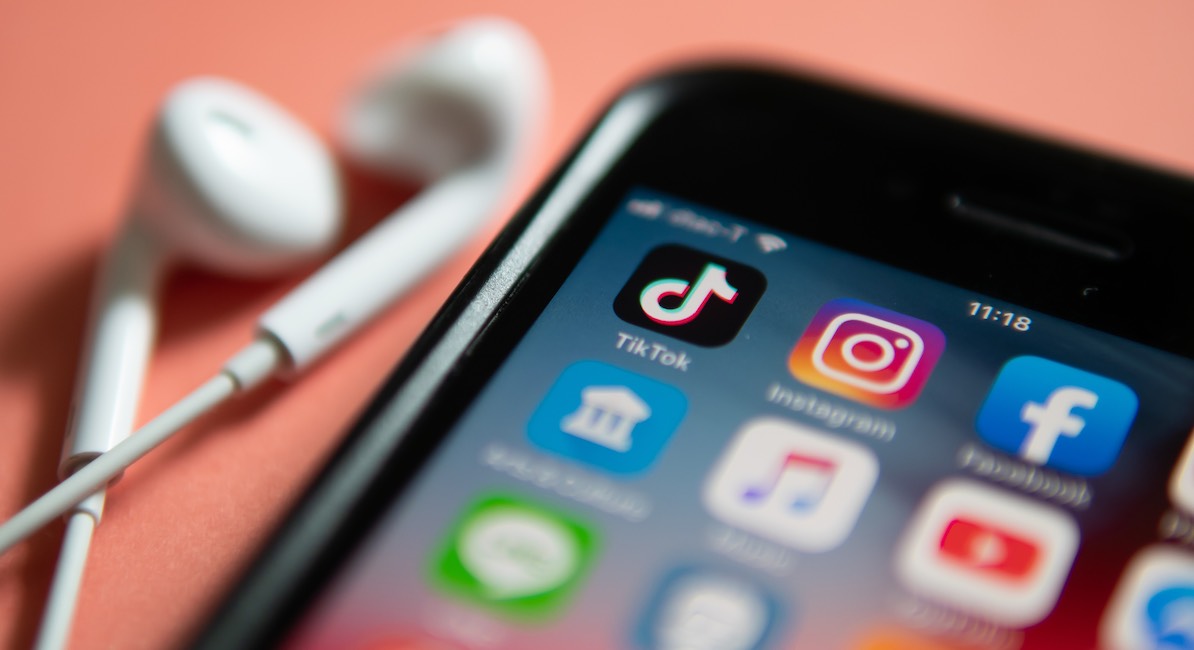 Pro-life videos posted on TikTok, the social media outlet which exploded in popularity this year, have been skyrocketing in popularity. Positive, uplifting stories have served to give people hope, something much needed now more than ever. And while there are countless videos posted, the pro-life videos on the platform seem to be changing hearts and minds.

Regan Bieber is a single mom who gave birth to her daughter, Laikyn Rae, as a teenager. It ended up being a blessing in ways she never thought it would be. “I became a single mom at 19. I thought that my life was over,” she wrote in the video, which featured pictures of her with Laikyn. “But in reality, it was just truly beginning. I found more motivation, I found a life outside of partying… and I learned to love myself a lot more. Babies are blessings.” (Click image below to watch.) 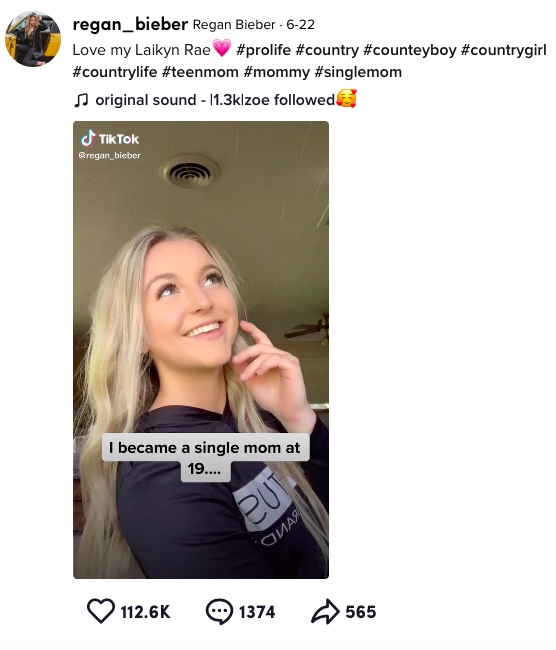 Thousands of people “loved” Bieber’s video for its positive message. “To be honest, I wouldn’t trade my life for anything,” she wrote on Instagram. “It has been an emotional ride to be young mom, which is unlike any other experience. It’s occasionally hard to believe a small human is depending on you, when just a few years ago you were concerned with petty high school drama. It’s crazy how quickly you learn to love something more than yourself!”

Elisa Love Steele is a pro-life podcaster, and in a popular TikTok she shared, she dives into some pro-life apologetics.

“My body, my choice? You can’t make me keep this baby in me, and continue to grow it, it’s too much work, and exhausting, and disrupts my life, not to mention it’s expensive, and I’m not ready for a child,” she began. “All of those seem to be legitimate reasons by many people who comment on this page and this community, as reasons for abortion. Those are not reasons for an abortion.” (Click image below to watch.) 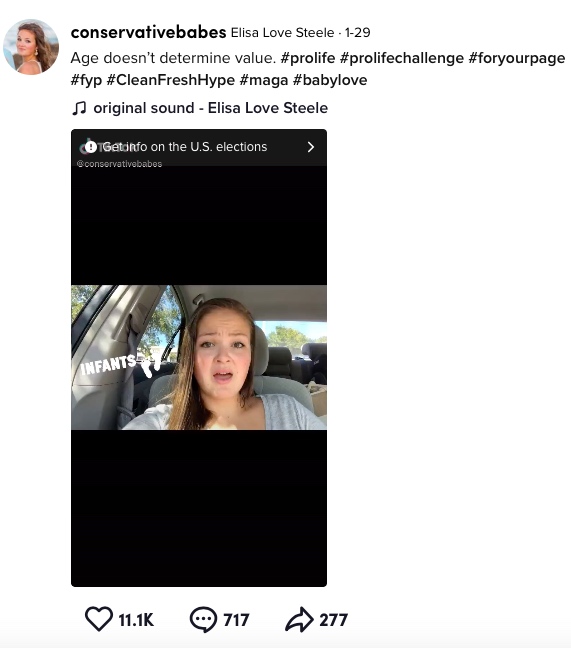 Steele further explained that these same reasons could all be used on a two-year-old child, just as much as they could for a preborn baby. “All of those reasons are reasons of inconvenience,” she continued. “It is a very poor argument if you are making the excuse that human life can be eliminated based on convenience. Children at all ages are ‘inconvenient.’ It doesn’t mean you can kill them.”

A woman named Sabrina shared the story of her rainbow baby, and how she was given a terrifying prenatal diagnosis. “At five months pregnant, I was urged to abort my baby,” she began. “What happened is, at 18 weeks, I went in for the anatomy scan, and they noticed my baby was missing his thymus. He had some growth abnormalities, heart irregularities, and a few other ‘markers.'” Two weeks later, she saw a specialist, who said those same issues were still there, and referred her to a genetic counselor. (Click image below to watch.) 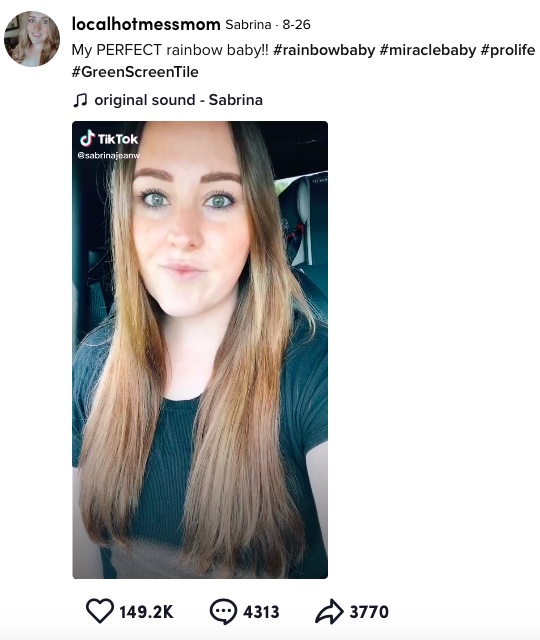 “They talked about how bad his quality of life would be, and all sorts of things, and at the end of it, they gave me the option to set an appointment at the hospital for my late-term abortion, for my baby who I felt, every day, kicking and moving… or to sign a bunch of paperwork saying I’ve been given that option, and I’m going to just keep going with my pregnancy.” Sabrina chose to sign the paperwork. “My pregnancy was hell,” she said. “I had to get shots weekly, to make sure I didn’t go into pre-term labor, and the whole time, I didn’t know what the outcome would be. And I got my perfect baby! And there’s nothing wrong with him.”

A TikTok user named Drew highlighted the stories of abortion survivors, whom the abortion industry often claims do not exist. “When Claire’s mother found herself pregnant at the age of 13, she decided to get an abortion,” the video reads, as he featured abortion survivor Claire Culwell’s story. “At 20 weeks pregnant, she got a D&E abortion. A few weeks later, something wasn’t right… she returned to the clinic and the doctors told her she had actually been pregnant with twins. One had been aborted… the other survived.” (Click image below to watch.) 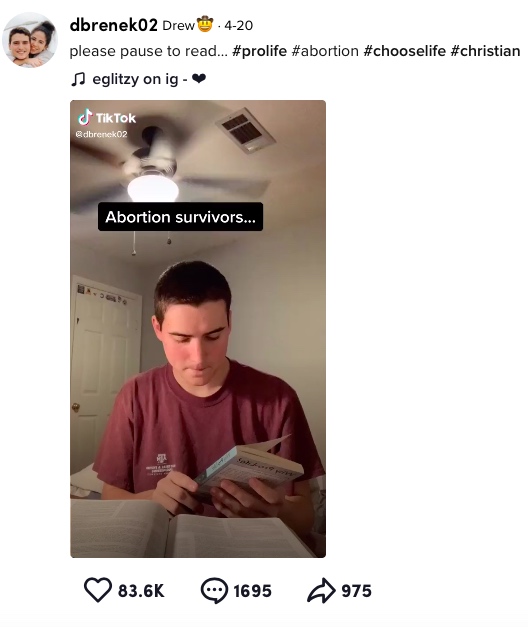 “Claire was adopted at birth, and is now an avid pro-life speaker, and shares her story around the nation.”

Just A Clump of Cells

The abortion industry frequently tries to deny the humanity of the preborn child, often using the term “clump of cells.” One pro-life TikTokker role-played a conversation between a son and his dad, to hilarious effect. (Click image below to watch.) 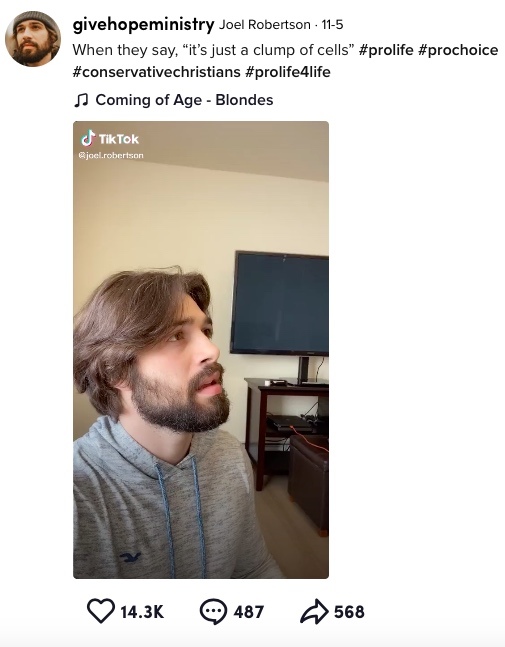 “Dad, was I alive when I was in my mother’s womb?”

“Oh, of course not son, you were just a clump of cells then!”

Watch to the end.

The Leading Cause of Death

Abortion takes over 2,300 preborn human lives every single day in the U.S., totaling more than 60 million killed in the U.S. alone since Roe v. Wade was passed. But what would happen if deaths from abortion were officially counted as a cause of death? TikTokker Megan Taps noted that deaths from abortion outnumber every other leading cause of death. (Click image below to watch.) 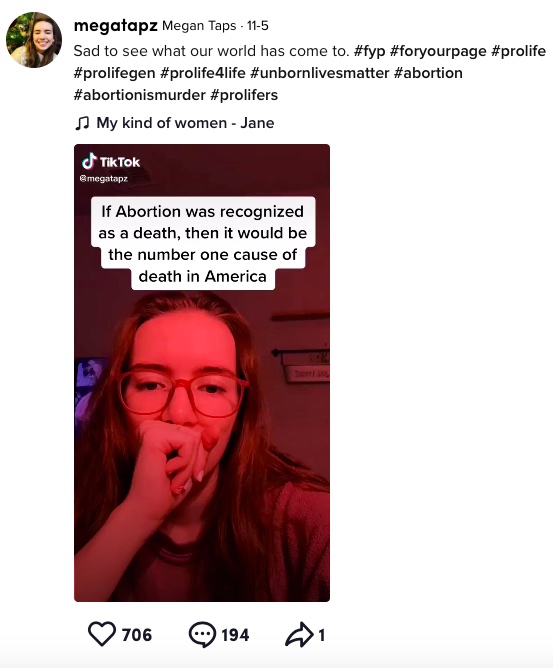 “If abortion was recognized as a death, it would be the leading cause of death in America,” the video began. “In 2017, abortions outnumber the deaths due to heart disease or cancer. Abortion doesn’t save lives. Stop saying it does. All human life matters, no matter the stage of development.”

Singer-songwriter Megan Faith Brassell spoke out about the number of lives taken by abortion in her TikTok, and said she won’t remain quiet about such an injustice. “You know what aggravates me?” she began. “When I say that I’m pro-life to people, and they say, ‘it’s not your body, it’s not your choice,’ I’m sorry, but when I see a mass genocide happening, and a huge injustice to innocent lives happening, I’m gonna speak up! I’m gonna say something about it.” (Click image below to watch.) 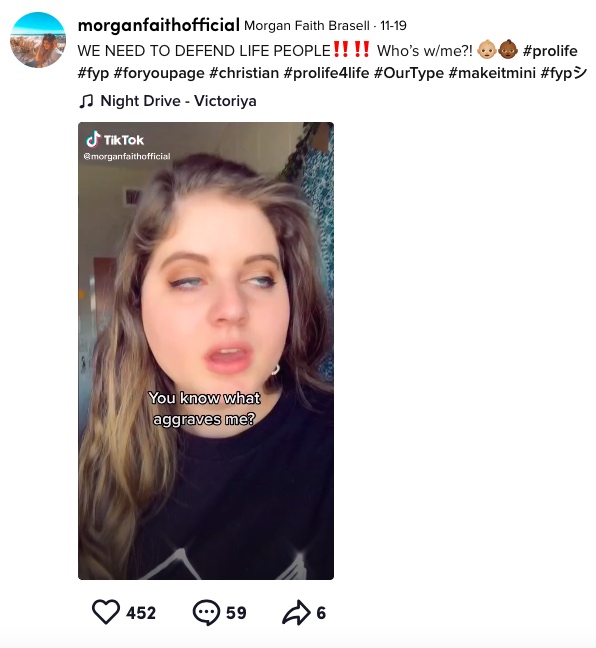 “At the end of the day, I can’t control these women,” she continued. “You’re right. But I can show them the effects that abortion can have on their lives. And that there are many other options that doesn’t involve killing a human life. There’s a silent holocaust happening in America right now, and it’s happening in places like Planned Parenthood. It’s happening right under our noses. It’s up to us to change this. Are we just gonna sit back, relax, and let it happen? Or are we gonna advocate for life?”