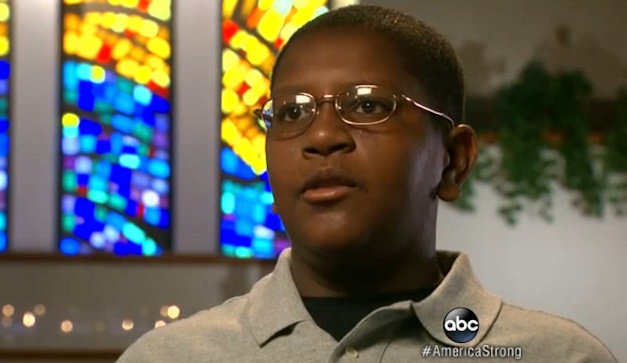 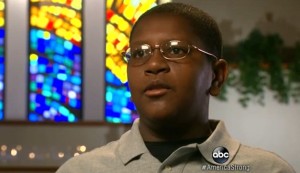 Davion Only via ABC News

By now you’ve probably heard of 15 year old Davion Only from St. Petersburg, Florida. Davion is the brave orphan boy who stood in front of the St. Mark Missionary Baptist congregation and asked to be adopted. The Tampa Bay Times shared the story in a way that allowed the reader to connect with this special young man. We learned of his troubled upbringing. He grew up in foster care and never met his parents. We read about his hearts longing for a “forever family”, regardless of how young or old or what color they were.

Our hearts sank when we learned he discovered his mom died just weeks after he found out who she was. We were inspired by the way made progress in hopes to find a family. He lost weight, worked on emotional issues, got his grades up to A’s and believed in his heart that God was hearing his prayers. As we read through his story we rooted for Davion. We all wanted him to win.  I think we believed he would show up at church, share his story and before he stepped off the platform he’d have families lined up to chose from.

I posted the story on Facebook and throughout the day I realized my friends were sharing it too. 5 people, 7, then 9 and more began posting the story and sharing how they cried while reading it. Friends were saying they wished they could adopt him and wanted to help in this situation. As day turned into night, I noticed the story was gaining attention. I googled ‘Davion Only’ to find a new article by the Huffington Post, NY Daily News, Fox News and then People Magazine. It dawned on me that this story was becoming much bigger than I imagined it to be.

Davion had a prayer in his heart. He wanted to tell his story in hopes that it would change something. He did and it has. His story is changing the hearts of people throughout the world. People are talking about adoption and weeping over the story of this boy. This is nothing short of incredible. Davion is not a snuggly newborn baby that was left on a doorstep and needs a home. He’s a 15 year old Black young man whose overcoming anger issues and comes from a troubled family.

Statistics make it clear that his race, age and background all lower his chances to get adopted. We hate to talk about that, but the numbers don’t lie. Yet Davion’s story seems to have surpassed those barriers. People don’t seem to care about the statistics when they hear his story. Hundreds of people of all races and from throughout the nation are wishing and wanting to take Davion into their home.

ABC news just released a video interview with Davion. In this video we get to hear Davion share about wanting a family who will love him for who he is. ABC takes the viewer into Davion’s group home where we get to see the locked cabinet where Davion holds his stuff. As he opens the lock, he hides the code, an response the interviewer believes is normal because he lives among boys and is careful to watch his stuff.

Davion can’t even go to the bathroom in that home without someone unlocking the door for him. Yet now he has a solid chance to have a room and a family of his own. ABC reports that over 500 people have called into the adoption agency to see if they could be a good fit for Davion.

Davion is only one of thousands in our nation who are in the foster care system. We’ve heard his voice and know his story, but what about the others? What about the others who are too shy to go to a church or have long ago given up the hope of finding a family? Davion represents them and He’s speaking for them.The world is listening, learning and longing to open their homes.

We were crushed when Davion didn’t find a family after going to that Baptist church. The Pastor was interviewed in the ABC interview and he let the world know people in his congregation wanted Davion but circumstances prevented them from adoption. I think through it all the God Davion was praying too had a greater plan. He is the God who does exceedingly abundantly above what we can ever ask, hope or imagine.

Who could have imagined Davion would capture the heart of America? What seemed like a rejection for Davion has turned into an invitation for us all. We are being invited to see the Davion’s of the world. To weep over their stories and take action to help these children find forever families. With the church receiving over 500 inquiries about adopting Davion, he is one step closer to finding a family, and we are closer to finding our love for humanity.