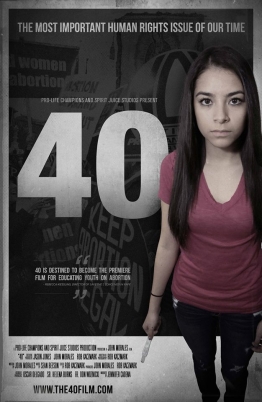 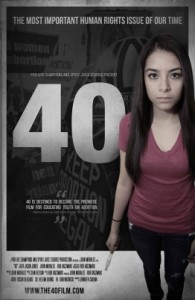 Where we stand after 40 years of abortion

John Morales welcomed a sold-out crowd at the Maple Theater in Birmingham, Michigan, March 25, who came to see the movie he directed and produced, ‘40’.

The documentary called ‘the definitive film on abortion’ commemorates the 40 years since Roe v Wade and includes footage from the 40th March for Life in 2012.

Morales, the ex-sports reporter for Fox 2 news in Detroit, seemed an unlikely producer of a pro-life movie until he shared his personal story of how abortion affected his life.

When the young woman he was seeing became pregnant with his child, she chose to have an abortion. Insisting that Morales pay for it, the result was that he felt left with “a hole in his heart.” He experienced grief, aggravation and depression, which affected him emotionally, spiritually and even physically.

Many years later, when Morales married, he and his wife were unable to have children and so they adopted a baby boy. “His mother could have aborted him, but I am so grateful that she did not!” said Morales.

In ‘The 40 Film’, Morales uses personal testimonies to reveal these particular wounds of abortion that have affected millions of women and men in the last 40 years. Besides post-abortive men and women, interviews also come from pro-life leaders, former abortionists and former workers at Planned Parenthood.

To be fair, Morales tried earnestly to get interviews with pro-choice groups: Planned Parenthood, NARAL (National Abortion and Reproductive Rights Action League) and NOW (National Organization of Women), to hear what they wanted to say. Though they would not respond to his request,  Morales used footage of pro-choice leaders at the March for Life and protest gatherings to bring up the most common arguments for abortion.

Framed like a debate, ’40’ represents diverse women on both sides while it investigates the truth about abortion. Honest and straightforward with compelling voices of experience and knowledge, ‘40’ is still not a graphic film. Though it briefly touches on atrocities such as the Kermit Gosnell clinic, it is only for the purpose of exposing abuse. We end up opening our eyes to the truth.

The movie has a long list of endorsements from pro-life leaders in all walks of life. Perhaps most surprising is how ‘40’ purposely answers the abortion arguments in a non-religious way. Despite being a devout Catholic, Morales uses secular, humanistic, and feminist pro-life leaders to speak the truth about abortion and its effects. They do a remarkable job cutting through the rhetoric of pro-choice arguments and sayings to arrive at logical conclusions. Without moralizing, the clear message is that after 40 years, we know the answers to the questions and we have suffered tremendously getting to know those answers.

After the screening, Morales urged the appreciative audience to help women to choose life by supporting Birth Choice Pregnancy Center and other Crisis Pregnancy Centers. “Be a good listener,” he urged. “Provide love and compassion (to women in need). Abortion is the most important human rights issue of our time. The truth is that no other rights matter if we do not first protect the right to life.”

Available  for screenings in theaters, Universities and churches, ‘40’ is a perfect film for the youth. For information please e-mail: [email protected]