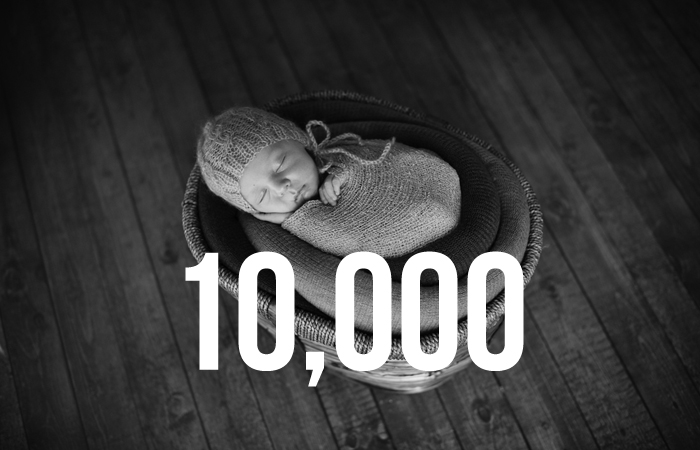 As pro-lifers, we continually work to see babies, mothers, and entire families spared from the tragedy of abortion. While it’s horrific to consider the millions that have died, it’s awesome to take time to reflect on the countless lives that have been saved. Here are a few stories that are cause for celebration!

The organization runs two worldwide campaigns each year: one in the spring and one in the fall, each consisting of 40 days. For these 40 days, pro-lifers from 19 countries gather to pray – usually in front of their local abortion clinics. Many of them also provide timely information and offers of practical help for women considering abortion. Lisa, a pro-life volunteer from Grand Rapids, Michigan, shared the story of a young mother who stopped to speak with a sidewalk counselor outside of an abortion facility. Through prayer and practical help, this mother chose life.

“[The mother] had a young baby already, no job, an unreliable boyfriend who wanted her to abort … and felt she had no support system,” Lisa said. “It was good news when she skipped her abortion appointment and agreed to go to a nearby pregnancy help center for an ultrasound.

“But later that day, she was on the phone with the counselor … and said that she had rescheduled the abortion for the following day. She still thought abortion was her best option.

“But she clearly couldn’t ignore God’s voice speaking to her heart because she contacted the counselor again as she was preparing to leave home for the abortion appointment.

“They talked about the many forms of assistance available for her and her baby. After she was able to consider all of this, she announced, ‘I have decided against it!'” Volunteers from the 2014 Marietta 40 Days for Life

In Marietta, Georgia, Griselle was standing alone at her local 40 Days for Life vigil. David Brandeo tells of the life she helped save that evening, proving that even when we stand alone, we stand for a great purpose.

“A teenaged boy walked up and asked if he could take a picture of her sign. She said yes … ‘If you’ll say a prayer with me for babies in danger of abortion.’

“He said he wanted the picture because he knows of such a baby. His girlfriend is five weeks pregnant and scheduled to have an abortion. He wanted to take a picture of the sign that reads ‘women need support, not abortion’ … and text it to his girlfriend.

“When they talked again, the young man told Grisselle that his girlfriend had canceled her abortion appointment … and the baby was saved.” Save the Storks – a bus similar to the Big Blue Bus

“The Houston team tells of a woman who was going to Planned Parenthood to schedule an abortion. But when she got there, the place was closed.“But even though Planned Parenthood was locked up for the day, there was a man praying on the sidewalk. She spoke to him, and he gave her a coupon for free services at the Big Blue Bus – the mobile pregnancy help center that spends many hours every week parked outside the abortion center. “A few days later, she returned and told the counselors on the bus she was there to redeem her coupon. She had changed her mind and chosen life for her unborn child! “‘When she saw her baby on the ultrasound,’ said one of the volunteers, she called this man an angel sent from God. If we hadn’t been there with our Big Blue Bus, chances are she would have gone into Planned Parenthood.’” In Sharonville, Ohio, 40 Days for Life volunteers pray and offer help outside an abortion facility that used to offer surgical abortions, but has now turned to medication abortions, also known as chemical or medical abortions, or RU-48.

“From what we understand,” said Mary Jo in Sharonville, “the cost of this is close to what an early-term surgical abortion costs. The abortion clinic continues to make a lot of money even though it is not doing surgical abortions.” “So the volunteers keep praying … and learning that their prayers are being answered. “A young woman who was entering the abortion center accepted some information from volunteers, but went inside anyway. She left … and returned a few days later. But this time, when she came out, she told the volunteers she had changed her mind and was keeping her baby.“The weather is getting better,” Mary Jo said. “Please consider coming to pray!”

Innovative medical practice has proved that RU-486 abortions can sometimes be reversed, so it’s essential to have pro-lifers outside these kind of abortion clinics – for the women going in, and for the women exiting.

As an organization, 40 Days for Life has changed the lives of more than just these 10,000 babies. In addition to the babies’ mothers, fathers, grandparents, and siblings, former Planned Parenthood director Abby Johnson was also directly affected by 40 Days for Life. Just last year, the ministry purchased the building where Johnson used to work for Texas Planned Parenthood and moved their headquarters there.

The organization notes that the campaigns are “40 days of prayer and fasting … 40 days of peaceful vigil … and 40 days of community outreach.”

You can join in the final week of 40 Days for Life by searching the map for the group nearest you. Or, you can plan to start your own group and find more information here. You can read more about the extensive work and miraculous results of 40 Days for Life in “40 Days for Life: Discover What God Has Done…Imagine What He Can Do” by co-founders David Bereit and Shawn Carney.