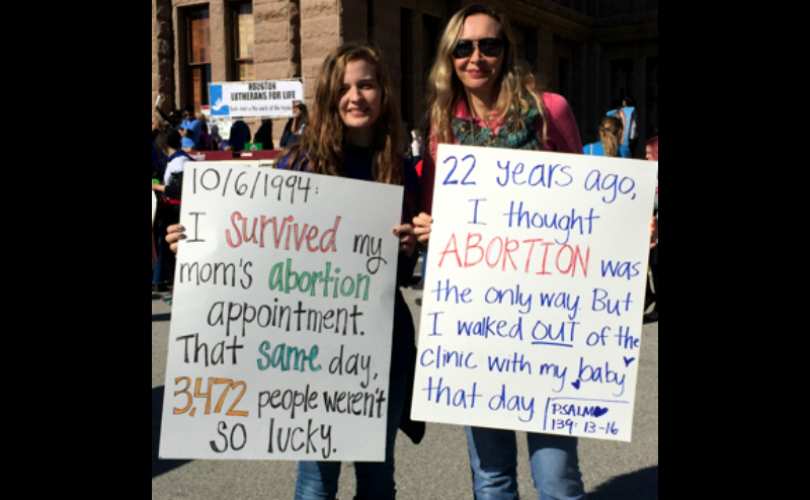 (Secular Pro-Life) – I looked at the plus sign on the pregnancy test in disbelief… This couldn’t be happening. Just a short month before, I’d been told by an ob/gyn that I would need fertility treatments to ever be able to conceive. I had been having the time of my life, partying and just enjoying life as a career college student with no responsibilities. I was in a relationship with a guy that made my heart race and my stomach do flip-flops. Neither of us thought much past the next party, pack of cigarettes, or 12-pack of beer. Life was easy and fun. Until this.

I had always been pro-life in theory, but now this was ME, MY life. I decided I wanted an abortion. No way was I ready to parent a child. I was a slacker extraordinaire. My main interest: fun. My boyfriend said he needed to give it some thought. After taking a day or two, he came back and agreed it was for the best.

I went to the university clinic and took another test to confirm my pregnancy. They gave me two pamphlets, one dealing with adoption, and the other with info on how and where to get an abortion. I called the number in the pamphlet and made an appointment for later in the week.

I took a good friend with me, as well as my boyfriend. It was a three hour drive to Houston and no one said much. As we neared the abortion facility protesters with large, grotesque signs came into view. I averted my eyes. I had a sick feeling as I sought to push away the reality of what I was about to do.

Once in the facility, I checked in and my boyfriend and friend sat down with magazines.

I was asked to provide a urine sample. The bathroom was on the other side of the large waiting room and every so often, a woman would emerge with a plastic cup full of her urine. This struck me as very humiliating. I wrapped my cup with a paper towel.

There were so many women there of every age, race, and seemingly socio-economic class. We were grouped together as we made our way through the process. At one point, I was given an ultrasound, and the tech matter-of-factly declared, “5 weeks.” Then it was on to group “counseling.” A young woman explained the process and then opened the floor to questions. I knew the answer to mine before I even asked, “Is it alive?” The response was, “It’s a clump of villi.” It was what I wanted and needed to hear, but I knew better.

Then it was back to the waiting room where we all sat until we were called, one by one, to do the actual procedure. I was struck by the tea party like atmosphere. Most women chatted seemingly nonchalantly. At one point, a woman tapped her foot impatiently, glanced at her watch and said, “How long is this going to take, I have stuff to do.” I was shocked, and wondered to myself, “Does she not have any idea of the significance of what she’s about to do?” A pretty brunette suddenly offered, “My husband keeps saying we’re going out tonight. He just doesn’t get it.” She told us she was 13 weeks pregnant and had a three year old daughter. Again, all I could think was, “You’re married with a child, why are you here?”

I found myself talking to a woman to next to me. At 38, she was older than most of us. Inexplicably, I began trying to convince her that she could do it, raise her baby. She gave me all the reasons why she couldn’t.

Out of all of us present in our group that day, there was only one woman who, in my view, was having the appropriate response. She never stopped crying, never made eye contact with anyone, never spoke. She just sat there, curled up in a fetal position, as she stared off into space, and wept.

One by one we were called. I sat there, stomach churning, knowing in my heart of hearts that this was SO wrong. I had not been able to quiet that inner voice that kept gently telling me, “No, you must not do this.” I argued back and forth with that voice. It was so gentle, so serene, but also very persistent. My name was called. I got up and made my way to the table. “Take everything off below the waist and lay on the table, feet in the stirrups.” I reached for my pants.

I hesitated. I stood frozen. The nurse noticed my reaction and advised me to go back to the waiting room and let a few more go ahead of me, until I felt more ready. Ready never came. When I was called a second time, the same thing happened. The nurse looked at me and said, “You don’t really want to be here.” I replied, “Does anybody really want to be here?”

She told me I was early and had lots of time to come back. Plenty of time. I knew I was walking out of that place and NEVER going back.

I made my way back to the waiting room where I had to deliver the news to my boyfriend that I was not going to have an abortion. To his credit, he didn’t react negatively, but just accepted my decision and we all left.

I was definitely NOT happy about being pregnant. I didn’t want to be anyone’s mom. I went home feeling trapped. I knew I couldn’t go through with an abortion, but I did NOT want a baby. Telling my conservative Hispanic parents was hard. They were deeply disappointed, but at the same time, there was no question that I had their support. Reality set in for my boyfriend and he broke up with me. Told me his feelings had changed. He promised to help me, but did not want to get married or even be with me anymore. Thankfully, this turned out to be his knee jerk reaction, made out of panic. We stayed together.

I sometimes wished that I would die, get hit by a car. Anything to be out of this situation. This was truly the worst thing that could have ever happened to me… or, so I thought.

Over time, things slowly fell into place. Little by little, day by day. Things that seemed insurmountable (like finances) worked themselves out. My boyfriend had just graduated from college, but couldn’t find a job in our small college town paying more than $5 an hour (which he took). I still had a year to go to get my degree.

I worried a lot during the course of my pregnancy that I would not love my child because I did not want her. I agonized over what kind of mother I would be. I resolved to talk to and sing to my unborn child every day. To act “as if.” The old “fake it til you make it.” It was quite an experience to feel the baby moving and then eventually for her dad to feel her, too. I read all the books I could get my hands on about pregnancy and babies. My boyfriend worked hard every day at whatever job the temp agency assigned him to. In the meantime, I was also very afraid of the actual labor and delivery process.

Finally, the big day arrived. I went into labor and accompanied by my mom and boyfriend, checked into the hospital. Seeing our baby girl, Taylor, for the first time melted our hearts. Oh, the joy, the love, welled up inside of us both. She was a perfect, easy baby and we were absolutely crazy in love with her. All of my fears and reservations melted away the minute I laid eyes on her. Twenty years later, I can still say she was the beginning of everything good in my life. Her arrival ushered in an era of blessings that continues to this day. She is a treasure. How wrong I was to think she was anything but a precious gift.

When she was three months old, her dad and I got married. We have been married for 20 years and have three other children, ages 17, 11, and 7. They are each a treasure and a blessing in their own right, none of whom would exist had I ended my first pregnancy. Words will always fail to express the true depth of my gratitude that my inner voice would not be silenced that day in the abortion facility.

My husband and I struggled mightily with when/how/if to tell our daughter our story. We agonized over the effect it might have on her. In the end, after years of grappling and consideration, we felt the time had come. She was home from college her freshman year. We sat her down and with great trepidation, told her our story. Her story. To our tremendous relief, she reacted with wisdom and maturity. She told us it didn’t surprise her that people in our situation would react that way and that there was never a time she felt unloved or unwanted by us. Years of fear and dread evaporated for me, just like that.

One of the blessings that has emerged from our revelation is that Taylor was galvanized to become a pro-life activist. This fills my heart with joy, as I know that her activism will save lives. For my part, my heart’s desire is that no other woman ever make the same mistake I came so very close to making. My heart breaks for every woman out there who has had an abortion. I want to save others the grief, regret, and pain that comes with the decision to end a pregnancy.

I can’t think of a single woman who regrets having her child, but there is NO shortage of women who regret their abortions. There is always a better option than abortion. It is NEVER the answer.

Reprinted with permission from Secular Pro-Life.