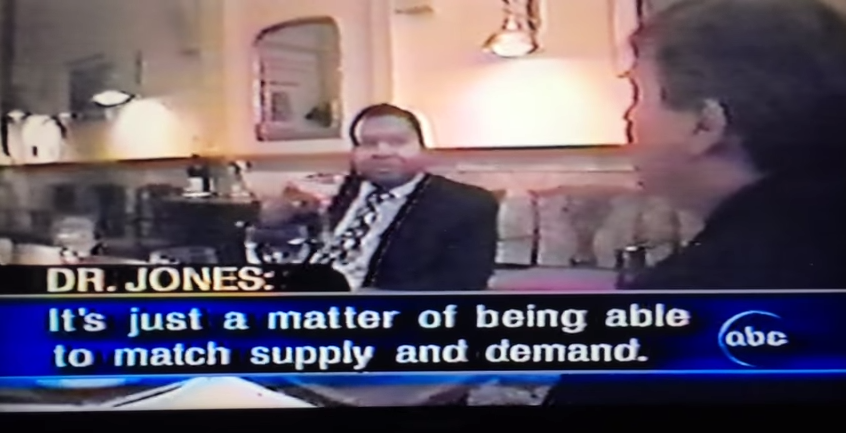 In the year 2000, ABC News did an undercover investigation on the selling of aborted human fetuses for profit. Chris Wallace, reporting for the news program “20/20,” and a producer acting as a buyer, secretly recorded a leader from a bio-tech company discussing the sale of aborted babies. The video is disgusting and sadly familiar.  It is chilling proof that the sale of fetal parts shown in the Center for Medical Progress videos has been a booming business for years.

While the undercover investigation took place 15 years ago, leaders in our government are still denying that these things occur. Here are some of the details exposed in the “20/20” report.

In the undercover video, an investigative journalist posing as a buyer asks Dr. Myles Jones, leader of a biotech company, over a dinner of roast duck, what a fetus goes for.

Dr. Jones – If you have a guy that’s say, desperate for a heart, than he’ll pay you whatever you ask.

Dr.Jones– It’s market force; it’s what you can sell it for.

A man named Dean Alberti, who once worked for a middleman fetal sales company, called Anatomic Gift Foundation, told “20/20” that abortions were altered to obtain higher quality parts. He mentions a clinic in Overland Park, Kansas, that typically did abortions with a suction machine.

When a baby was donated, however, the abortionist would use a syringe supplied by AGF. Experts say the method would cause a longer procedure. At the end of the episode, Wallace interviews James Barsley, a leader in the Anatomic Gift Foundation.

Wallace: Did AGF ever encourage doctors to alter abortions to get better specimens?

AGF leader: No absolutely not. First of all, that would be illegal.

Wallace: But wasn’t AGF supplying those syringes to get better tissue?

AGF leader: Yeah, I don’t believe that was altering the technique.

Wallace: Doesn’t the special syringe add 15 mins to the abortion?

Wallace: Oh, yes sure you do.

AGF leader: In some cases, perhaps it takes longer.

Women consent to tissue donation without knowing all of the facts.

Cindy Smith, a mother of five, discovered she was pregnant with twins after getting radiation treatment; however, a doctor told Smith the twins were dying inside of her. Smith then decided to end her pregnancy and said her only comfort came from consenting to give her babies to science.

After learning through the investigation that her baby parts were sold for profit, Smith said: “I did not donate thinking that someone was going to profit. That just really bothers me; that’s not what I intended at all…Makes me almost feel the one good thing I did maybe wasn’t that good at all. “

Dr. Jones said earlier in the recording: “You can get something that has all the legal mumbo-jumbo in it and they’ll sign it anyway. If you have someone trained to ask properly, you can get 80-90 percent.”

Dean Alberti, the whistleblower who left the business of fetal procurement, said the companies he worked for— Opening Lines and Anatomic Gift Foundation— pressured him to get as many baby parts as possible. He said at times they told him to take it from women who did not donate them for research. Alberti said he was told, “If they’re not looking, they’re not looking —just grab a pancareas.” Wallace asked him, “Did you do it?” “Yes I did,”he responded.

Alberti said he helped to put together the price lists for these companies. On one list, we see $325 for spinal cord and $999 for a brain. When Wallace asked how these prices were determined, he said there was no way to justify the prices. He said the price list on the flyer for “fresh fetal tissue harvested and shipped” just represented greed.

Planned Parenthood President Gloria Felt appeared on ABC, saying, “It seems inappropriate, totally inappropriate. Where there is wrongdoing, it should be prosecuted, and people who are doing that kind of thing should be brought to justice.”

At the end of the interview, Wallace said, “Tomorrow a congressional sub-committee will hold a hearing on fetal tissue trafficking, and the Dean Alberti whistleblower will be the star witness.”

At the closing of the episode, Wallace is asked why there hasn’t been any enforcement of the laws that are against altering abortion procedures and selling baby body parts. Wallace said he didn’t know why, but he hoped the investigation would be the first step in figuring that out.

The ABC News investigation is disturbing, and further emphasizes why we cannot afford to let this issue be swept under the rug again. This time, we must continue to demand action until something changes.