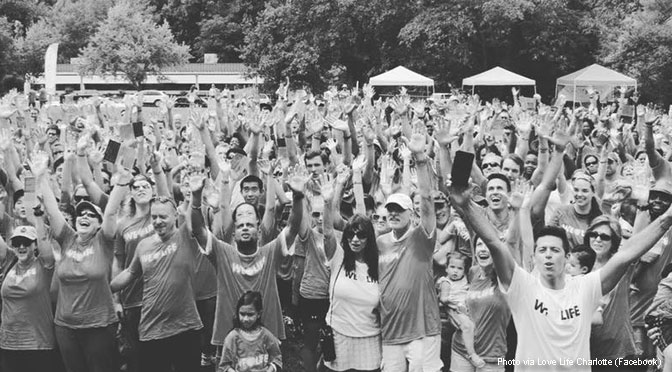 On Saturday, over 1,000 people from more than forty different churches joined a pro-life prayer march in Charlotte, North Carolina. Charlotte Stories reports that the event was one of the largest of its kind to ever take place in the state’s fastest growing city.

The march was organized by Love Life Charlotte, a ministry dedicated to supporting and increasing pro-life crisis pregnancy efforts. On its Twitter page, Love Life Charlotte describes itself as a “40-week campaign uniting and mobilizing churches to create a culture of Love and Life that will bring an end to abortion in Charlotte in 2016.”

On the group’s Facebook page, one commenter described the march as “A thousand people meeting today, not to protest, not to shame. To love and serve people and ask God to bring an end to abortion.” Following the march, Love Life Charlotte celebrated its historic turnout.

What a powerful day in the life of our city! One body of believers, over 1000 strong. God be praised!#1000ForLife pic.twitter.com/8F0VHXofv4

“It’s one thing to be against abortion, but it’s another thing to bring life, to actually bring choices to these mothers that feel like they really have no other choice,” said David Benham of Cities 4 Life, a partner of Love Life Charlotte.

Cities 4 Life has built “an extensive network of resources for women who are struggling through unwanted pregnancies,” known as the Life Network. Through the Life Network, pregnant women can find contact information for a host of pregnancy resources, ranging from crisis centers to online chat groups.

By working together, promoting positive change and offering quality alternatives, Charlotte pro-lifers believe they can lead the way in ending the city’s demand for abortion.