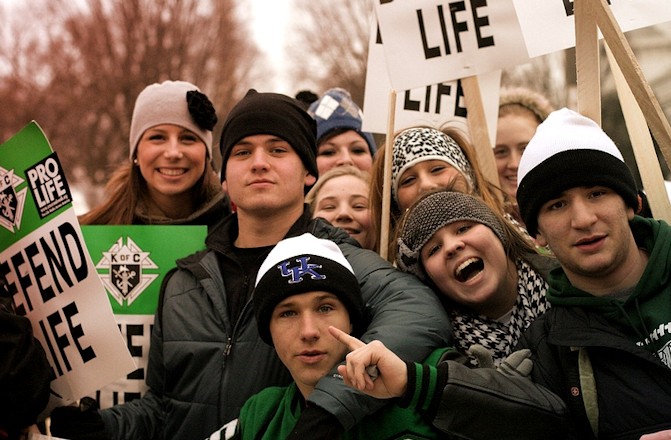 Every life is a gift. That’s the message that the 2015 March for Life is emphasizing for its 2015 event on January 22. The March for Life is an annual event, held each year on the anniversary of Roe v. Wade. It was on this day in 1973 that the U.S. Supreme Court found a Constitutional right to abortion despite no mention in the Constitution.

Now, 57 million lives later, the pro-life movement shows no signs of slowing. The March for Life began as a small event, but it quickly became the largest peaceful pro-life demonstration in the nation.

Here are 10 reasons to march for life (wherever you are):

1. Because abortion is a silent holocaust, and marching draws attention to the atrocities. There is power and strength in numbers. The old saying declares that “the squeaky wheel gets the grease.” When we are silent about abortion, abortion can more easily continue unchallenged. Make noise.

2. Because of the connections and unity you will find. You will join like-minded people, make friends you can partner with in the fight for life, and connect and encourage your own heart to continue the battle for life.

3. Because the nation is dying. Literally. Recently this story reminded us what 57 million people killed looks like. It looks like a nation that is dying en masse. 4. Because a true feminist attitude is a pro-life attitude. It’s a lie that women are empowered by having a right to kill their offspring. A real woman protects her young — whether by raising her child or by letting another adopt her child. The strong woman supports life, and women in this nation need to see you stand up for them — not timidly, but with the strength to fight for life. We need to counteract the militant voices that proclaim that feminism means a right to kill.

5. Because justice matters. It’s been impossible to follow the news in the past few months without hearing a reminder of the need for justice, especially for African-Americans. Abortion is not at all different. According to the pro-abortion think-tank the Guttmacher Institute, “black women are more than 5 times as likely as white women to have an abortion.” If we are fighting for justice, especially in a time of racial tension, it’s negligent not to fight for justice for these African-American babies, who are dying at a higher rate.

6. Because the old song and cliché are correct: children are the future. It sounds like a sappy greeting card, and yet when we stop and think about it, what future do we have when babies are killed at will? None. The next abortion actually could be the child who grows up to cure cancer, save your child’s life in an accident, solve the problems that plague us, or maybe simply marry the baby you have yet to have. Every abortion steals a chance for hope. We march to cry for hope for our future. 7. Because of the civil rights movement. As we celebrate Martin Luther King, Jr. and his influence on civil rights in the same week as we grieve the anniversary of legalized abortion, we must remember that abortion is a civil rights issue. Though the Declaration of Independence says that “all men are created equal, that they are endowed by their Creator with certain unalienable Rights, that among these are Life, Liberty and the pursuit of Happiness,” there’s a silent disclaimer that the abortion industry makes: if we let you be born. All lives deserve the same rights.

8. Because for every 1,000 babies born, 228 are killed by abortion. That makes it about 19%; 1 out of 5 babies never get to live. We march to fight for their right to live, to bring awareness to this terrifying data, and to put passion and action behind the outrage. We march to call for life for all five of those babies, recognizing that four out of five is not sufficient. 9. Because you can march for life where you are. Not everyone can get to Washington, D.C. each year, but all over the nation, cities and regions hold their own March for Life events in support of the national event and to amplify their voice in their region. To add your name to this list and join a march near you, you can look at this link.

10. Because every life is really a gift, as this year’s March for Life theme says. But those who have a prenatal diagnosis of Down syndrome, Trisomy 18, Trisomy 13, spina bifida, etc., have only about a 10% chance of being born. While those who are allowed to live are repeatedly noted as being some of the most loving and wonderful people to those who know them, the fear of simply carrying one of these pregnancies to term is so great that it’s rare that it happens.