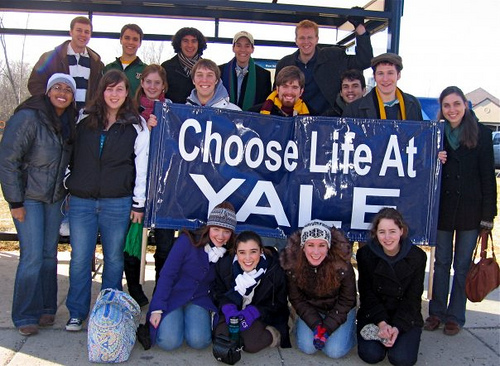 In my small state of Connecticut, a few cities are especially dear to my heart. One of those cities is New Haven. I went to college in New Haven, at a wonderful state school that was once a teachers college. Just a short bus ride away from my school stands the school New Haven’s famous for.

I can’t tell you how many times I’ve heard “Did you go to Yale?” when I mention my campus city days. “No,” I’ll say, “I didn’t go to Yale.” Yet I enjoyed the university as a city resident does. I walked through the large buildings, gazed upon the stunning architecture, and marveled at the history before me. Yale, which was started as a school for ministers and political leaders, is one of the most prestigious and widely recognized Ivy League schools in the world.

Imagine my great joy when I realized that the university has an active and outspoken pro-life organization. Chose Life at Yale, or CLAY, is an organization that provides a forum and community for students at Yale who oppose abortion. According to their website, CLAY “upholds the dignity of human life through weekly meetings, discussions, campus outreach, special events, and other educational initiatives.”

CLAY also provides support and educational resources for women in crisis pregnancy situations on campus and in the local area. Pro-lifers tend to be minorities on college campuses, especially the liberal universities. CLAY believes that pro-life organizations on liberal universities have been marginalized and condemned for their viewpoints for too long. These pro-life students know that their mission has truth and is backed by science and social evidence. They want to stand together as an united voice of America’s youth, liberating minds from the snare of lies and false promises promoted by the abortion industry.

This past weekend, CLAY hosted the first pro-life conference at Yale, called “Vita et Veritas” which means “life and truth” in Latin. Vita et Veritas is a conference that seeks to make the pro-life vision intelligible on college campuses. The event took place at the St. Thomas Moore Chapel with speakers who represented different pro-life perspectives on abortion.

Some of the speakers included Clark Forsythe from Americans United for Life; Hardley Arkes, a faculty member of Amherst College, who was the main architect of the bill that became know as the Born-Alive Infants Protection Act and author of the book Natural Rights and the Right to Choose“; William L. Saunders, Senior VP for Legal Affairs at Americans United for Life; and Matt Bennett, founder and president of the Christian Union. The full list of speakers and their bios can be found here.

The conference had an interfaith panel that discussed the importance of cooperation in the pro-life community between religious and secular groups. This panel included Suzy Ismail from the Center for Muslim Life and Secular Pro-Life President Kelsey Hazzard. Ismail said that many Muslims don’t speak out against abortion, despite having pro-life views. She has been told herself to not talk about abortion when she’s spoken at Muslim conferences. Yet she believes that Muslims have a responsibility to speak out on the issue of abortion. Secular Pro-Life President Hazzard says there are 6 million Americans who are non-religious and pro-life. She represents their voice as she seeks to raise awareness.

Sally Winn, Vice President of Feminists for Life, was also a guest speaker. She gave a talk entitled “Refuse to Choose: Reclaiming Feminism,” in which she discussed how she became pregnant while in college and kept her child. Winn acknowledged how hard it was raising a child in college, with little support, no day care for undergraduates, and no changing tables at the university.

She discussed Yale’s basic health plan, which fully covers abortions yet doesn’t cover the costs of most deliveries. She stated that a student could have to pay $400 out of pocket for a delivery even with “Hospitalization/Specialty Coverage.” Those conditions make it much easier for students to abort than give birth to their children.

Winn is advocating the need for universities to improve their resources so mothers on campus will feel the freedom to have children on campus. She told the Yale Daily News, “I think the future is really bright if we focus on what women need[.] … In my daughter’s lifetime it will be more commonplace for pregnant women to be on college campuses.”

The closing talk of the conference, ” The Secret Agenda: A Former Abortionist Speaks Out” had around 50 students who attended. Yale Daily News interviewed a member of CLAY, Ryan Proctor, who said he was pleased with how the conference went and hopes it will be an annual event. He said, “It was a great turnout for a first year, it came together nicely and we are were looking forward to being able to build on what we’ve done.”

Another student, Dimitri Halikias, who isn’t pro-life, said the event was interesting. He responded, “They did a really good job trying to attack the issue from different perspectives instead of using stereotypical arguments.”

The students of CLAY have a fall schedule that includes weekly meetings, workshops, and a trip to D.C. for the March for Life 2014. For more information, you can check out their webpage or Facebook page. To see encouraging pictures from their past events, check out their photostream on Flickr.

I commend the students of CLAY. They’re doing an excellent job being shining lights and sharing truth among a student and faculty population who truly need to hear it.