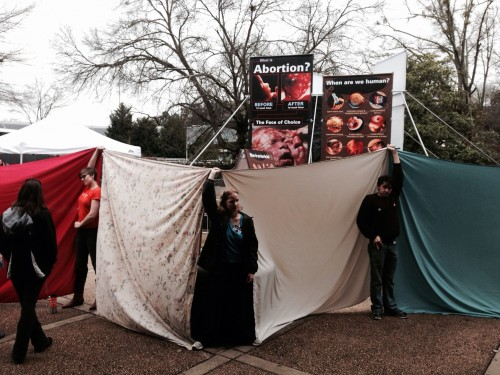 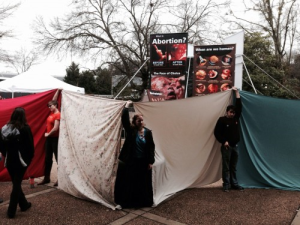 While pro-life students showed their peers the reality of abortion with graphic images, pro-choice students built a makeshift wall to block the images from view and held signs with statements like “Pussy Power” and “My Body, My Choice.”

In interviews with The College Fix, pro-abortion students called the graphic images – which showed bloody fetuses after late-term abortions – “hateful speech.” They said students shouldn’t be forced to look at them, and that most of the pictures showed “stillborns” and not abortions.

… Women’s Studies Student Organization members stood by with picket signs. Many of the signs’ messages were common pro-choice slogans like “My body, my choice” and “How can you trust me with a child, but not with a choice?” Others were more creative: “Put your politics where your pussy is! (If you don’t have one, shut up).” One male student, dressed in a suit jacket and boxer briefs held a sign reading, simply, “Pussy power.”

… Members of the Sexual Health Advocacy Group, for their part, held up bed sheets around the display to create what they called a “corridor.”

SHAG president Danielle Duncan told The College Fix that the intent was not to suppress JFL’s speech, but to give students a choice about whether to view the prominent display or not.

Using graphic images is a matter of dispute even within the pro-life movement. Some people feel they’re necessary; others think they’re harmful or should be used selectively. But that’s not the question at hand here.

This is literally just a tiny sampling of incidences where pro-lifers have been censored on college campuses alone. There are more, and it certainly isn’t restricted to universities, either.

The question is this: why do abortion advocates feel so driven to censor pro-lifers?

After all, according to them, they’re the ones who are right. They have truth on their side, facts, logic, science. They also claim time and time again that any laws that involve informed consent aren’t needed because women already know everything. Women are smart enough to discern this information for themselves, and whether or not abortion is the right decision for them.

If all of that is true, then what do they have to fear from pro-life displays? If women are smart enough to know whether or not they want abortion, and things like ultrasounds don’t change their minds anyway, then who cares if pro-lifers give out information about alternatives to abortion or the facts about risks associated? Hey, women are strong enough to not be swayed, right? And they’re smart enough to already know all of the risks involved.

What about the science? If the science is on the side of pro-aborts, then who cares about pro-life displays? The argument is that the displays are unpleasant to see – and many pro-lifers would agree – but since when are we guaranteed the right to live in a world free of unpleasantness? Besides, is their point really that women are so weak and prone to histrionics that they absolutely cannot handle glancing at a pro-life display for all of five seconds or so? Women are strong enough to know what they want. And they’re strong enough to deal with seeing a point of view that they disagree with in a public setting…unless, of course, the pro-abortion opinion is that we’re not.

It seems that the issue is more about exposing the realities of abortion than anything else. If abortion advocates were so secure in their position, in knowing that their stance is right and just, then why would they feel so threatened by pro-life displays?

Why feel the need to censor pro-life information from getting out there if there’s no truth to it? It’s the million-dollar question with an answer we’ll never get, because it exposes the utter frailty of the pro-abortion movement. Pro-lifers have truth and science on our side. Abortion advocates can’t fight against that, and they know it – so all they can do is try to shut us down.