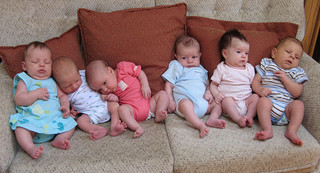 Dr. Mark I. Evans is known around the world for his work in genetics, prenatal screening and diagnosis, and the selective reduction of pregnancies. Of course, “selective reduction” is code for the choosing and killing of one or more babies in a multiple pregnancy. You don’t reduce children – you kill them. But Dr. Evans prefers to refer to this procedure as “pregnancy management.”

Which of these babies would "pregnancy management" or "selective reduction" kill? Photo credit: Anthony J on Flickr

He admits that, in the first reduction he performed, he “stabbed two of the fetuses with a needle.” Today, the general technique – and the one used by Dr. Evans – is plunging a needle filled with potassium chloride into the heart of the targeted baby. Soon after the chemical enters the baby’s heart, the baby ceases to move; her heart has stopped. Some babies move around for a short time before finally succumbing to their sudden deaths, but potassium chloride is deadly, and the procedure, accurately done, is unsurvivable.

When you read about Dr. Evans, it’s obvious that his years spent stopping the hearts of “thousands” of babies who had the misfortune of being multiples have calloused him. Yes, he may be one of the “experts.” He may be one of the few in his field freely willing to discuss the ethics of selective reduction, or “pregnancy management.” But it’s clear that Dr. Evans has fallen down a slippery slope. As the years go by, his standards fall lower and lower.

For example, Dr. Evans states that he once refused to even consider gender in the selection of which babies would live and which would die. Now, however, his list of considerations, in order, is this:

2. Suspicion and concern, such as smaller crown-rump length or larger NT or MZ twins

3. Other technical factors of serious concern

4. If nothing else matters, then we can consider gender differences.

His article, written in “ViewPoint,” continues:

The last criteria [sic] is new and was added only in the past several years, as there is now balance in gender preferences rather than the previously seen male dominance. For couples reducing to twins, the most common preference is for one of each gender, and for those going to a singleton, more than half want a girl.

So basically, all things being equal, it’s perfectly fine to kill your boy simply because you want a girl or vice-versa. In Dr. Evans’ mind, gender has become a very valid reason to stop the beating heart of a tiny baby.

In addition, back in 2007, Dr. Evans told the Washington Post how he once refused to reduce twin pregnancies to singletons. But even five years ago, he had changed his mind. His reasoning?

Evans has written articles arguing that it is ethical to reduce a twin pregnancy. After all, he said, if it’s okay to reduce from one to none — that is, if you support abortion rights — then two to one should be okay, too. The idea is still controversial. “Twenty years ago, the ethical debate was with triplets. But now, as far as I’m concerned, there is no doubt about triplets, and the ethical debate has moved to twins.”

The Washington Post’s 2007 article also highlights comments from Dr. Evans’ sonographer, Rachel Greenbaum. She struggles with the “pregnancy management” she takes part in (emphasis mine):

“I don’t particularly like doing the reductions,” she said. “I find it very stressful. With every patient, I think, If it was me, what would I do? Some of these people tried to get pregnant for the past five years and prayed to God. And now that they are pregnant, they are telling God: You gave me too many. I sometimes feel like we are playing God, and that is very emotionally stressful.”…

According to Dr. Evans’, the best time to “manage” a multiple pregnancy is at 12 weeks. BabyCenter describes what a baby this age is doing:

The most dramatic development this week: reflexes. Your baby’s fingers will soon begin to open and close, his toes will curl, his eye muscles will clench, and his mouth will make sucking movements. In fact, if you prod your abdomen, your baby will squirm in response, although you won’t be able to feel it…..

Meanwhile, nerve cells are multiplying rapidly, and in your baby’s brain, synapses are forming furiously. His face looks unquestionably human: His eyes have moved from the sides to the front of his head, and his ears are right where they should be. From crown to rump, your baby-to-be is just over 2 inches long (about the size of a lime) and weighs half an ounce.

Even the writer of the Washington Post article, who witnessed reductions in Dr. Evans’ office, calls these babies “clearly human.” While some, like Dr. Evans, like to justify selective reduction based on their claims that it is not abortion (because they are not ending the entire pregnancy) and that it increases the remaining babies’ odds of survival, there are several problems that are not addressed. Of course, while a reduction of twins to a single baby may increase one baby’s chance of survival – from 92% to 97.5%, based on Dr. Evans’ numbers – the one baby killed has his survival rate plummet from 92% to 0%. Don’t tell me that’s in the best interest of saving human life.

1) Disabilities: Dr. Evans (and others like him) see nothing wrong with ending the life of a baby simply because he or she has a genetic condition or disability. Even the fact that triplets have an increased chance of being born with cerebral palsy (a condition that typically has a normal life expectancy and that often does not take away a person’s ability to care for themselves) is justification. A mere chance of being disabled is used to rationalize away an unneeded killing.

Pro-lifers need to take three steps of action. First, we need to speak out about “selective reduction” and “pregnancy management” and call it for what it is: the killing of innocent babies, just like abortion. Second, we need to keep talking about the value of every life – disabled, genetically sound, or not. We need to bring to light all the things that people with Down Syndrome, spina bifida, cerebral palsy, cystic fibrosis, and the rest can do as well as all the advances that have been made for them today. (For a great example, look at Gianna Jessen, an abortion survivor born with cerebral palsy.) Finally, pro-lifers need to speak out about the immorality of the current fertility treatment system. No doctor should have the right to implant so many babies that will just be killed. No parent should have that choice. It’s time we reformed our fertility system.