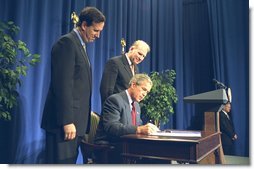 Ten years ago today, on August 5, 2002, a group gathered in Pittsburgh to watch President Bush sign the Born-Alive Infants Protection Act. The purpose of this act was to protect the lives of children after they were born, particularly protecting those who survived an abortion.

In his speech, President Bush spoke of the importance of protecting the weak and powerless:

The history of our country is the story of a promise, a promise of life and liberty made at our founding and fulfilled over the centuries in our laws. It is a story of expanding inclusion and protection for the ignored and the weak and the powerless. And now we extend the promise and protection to the most vulnerable members of our society.

He spoke of the worth of children:

The issue of abortion divides Americans, no question about it. Yet today we stand on common ground. The Born Alive Infants Protection Act establishes a principle in America law and American conscience: there is no right to destroy a child who has been born alive.  A child who is born has intrinsic worth and must have the full protection of our laws.

And he also spoke of the importance of protecting the lives of the unborn, referring to the bill as a “step” in the process:

Today, through sonograms and other technology, we can clearly – see clearly that unborn children are members of the human family, as well.  They reflect our image, and they are created in God’s own image.

Ten years later, the issue of abortion still divides Americans. While the step of passing the Born-Alive Infants Protection Act was taken, more steps need to follow. Life in all stages must be protected.