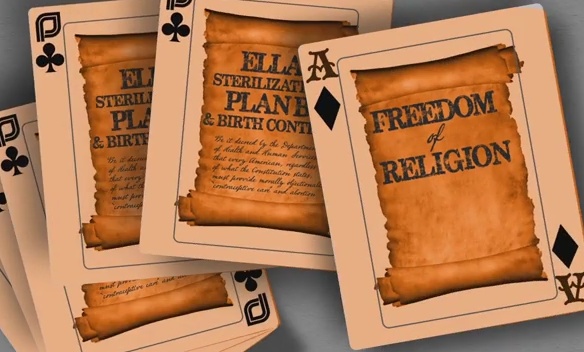 Americans United for Life has summed up the Affordable Care Act’s (ACA) contraception mandate, and how it affects the First Amendment Rights of Americans in a video presentation. The contraception mandate is behind the many religious freedom lawsuits against the ACA (like Hobby Lobby’s). While fauxminist and abortion-promoting groups cry foul every time a group makes a conscience-based claim against government-mandated coverage of contraception, the video concisely and easily overviews the fundamental problem with forcing Americans to pay for birth control and abortion.

This isn’t about birth control, it’s about government control. It’s about mandating coverage for abortion-causing drugs. It’s about them telling you that this abortion-causing drug mandate must be paid for by you, your family, your faith-based organization, your company. It’s about your First Amendment freedoms. The Obama administration wants us to anti up while it tries to trump the First Amendment’s freedom of religion. It’s a right of conscience, whether you’re religious or not. Thomas Jefferson once wrote, “No provision in the Constitution ought to be dearer to man that which protects the Rights of Conscience against the enterprises of the civil authority.” Yet under the mandate, Americans have to purchase health insurance, and this coverage has to include coverage for abortion-causing drugs. Conflicted yet?

The video goes on to quote Obama explaining his administration’s rationale behind mandating abortion-causing drugs in ACA legislation:

“We also accepted a recommendation from the experts at the Institute of Medicine,” By experts, he means a confab of abortion advocates. You know, the ones who concocted the stats behind the mandate? [Obama continues:] “…that when it comes to women, preventive care should include coverage of contraceptive services such as birth control.” They’re forcing us to pay for Ella, a drug that can end pregnancy. In the end, we will all pay for abortion, regardless of our conscience… all healthcare should sustain life, not provide life-ending mandates that contradict our rights. The government wants control of our conscience, our beliefs, our First Amendment freedoms. The Constitution protects all of us from governmental intrusion on our lives. That control is in your hands. Don’t be conned. Get the facts.

Beyond the religious freedom argument so concisely outlined by the above video, there is widespread frustration among women, religious or not, who are sick and tired of having their fertility being treated like a disease by contraceptive mandate semantics. If, as the Institute of Medicine (aka abortion advocates) insist, contraception must be covered as a “preventive service,” we have to ask ourselves what birth control and abortion-inducing drugs are designed to prevent The answer?

They’re designed to prevent a woman’s body from carrying out its fertility– even if she is already pregnant, the abortion-causing drugs mandated by the ACA can cut off her body’s healthy functions to end her pregnancy and cut off her baby’s life. So what these “preventive services” are preventing is the normal functions of fertility, and in the worst cases, they’re preventing an existing life from thriving. Real feminists, who take offense at having their fertility treated like a disease, have had enough. Add this frustration to the mandate’s disregard for religious freedom and conscience protection, and the nightmare that is the contraception mandate becomes clear.