In a multi-part series, Live Action News will be fact checking the online fact-checker, Snopes.com. We will be following the site’s very poorly researched posts regarding Live Action’s investigations into the abortion corporation, Planned Parenthood. While Snopes claims to be “one of the World Wide Web’s essential resources” and “an online touchstone of rumor research,” the site’s writers appear to be lacking in skills when it comes to researching the facts about Planned Parenthood.

Case in point: Shortly after Live Action released an exposé featuring eyewitness testimony from two former Planned Parenthood employees — one a center manager, the other a nurse — revealing that Planned Parenthood required its facilities to hit monthly sales quotas for abortions (“abortion quotas”), Snopes rushed in to rate the claim as “Unproven.”

The Snopes “fact checker” in this case was Kim LaCapria, and it wasn’t exactly clear how she came to her “unproven” conclusion. After all, Live Action put two witnesses with first-hand knowledge about Planned Parenthood’s quotas on the record by name, and then published their statements on video. In contrast, while LaCapria claims in her Snopes piece to have contacted Planned Parenthood (which denied the quotas existed), she failed to publish any names or titles of contacts at Planned Parenthood for validation.

Failure to Address the Actual Claim 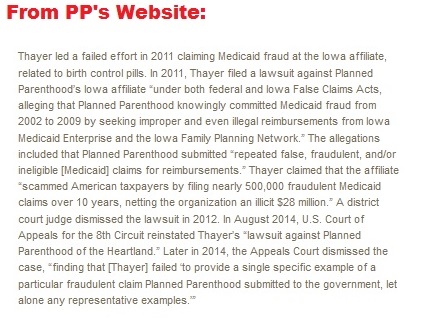 Sorry, Snopes, but taking Planned Parenthood’s public statements at face value is not investigating or fact-checking in the slightest.

Enter the ever-helpful Google search engine, which reveals a June 2016 update in the DesMoines Register, which reported that a federal judge has reinstated Thayer’s case of fraud against Planned Parenthood. My advice to Snopes and LaCapria? Don’t be so quick to quote Planned Parenthood regarding Thayer’s fraud case. The Iowa news outlet states in part:

John Jarvey, chief federal judge for southern Iowa, ruled this week that the lawsuit can proceed to trial. Jarvey agreed with Planned Parenthood lawyers that some of Thayer’s claims were unfounded, but he wrote that others were strong enough to deserve a full hearing… [T]he judge declined to dismiss Thayer’s claim that Planned Parenthood defrauded Medicaid by billing for birth-control pills that were dispensed before a physician or nurse practitioner had written specific prescriptions for them. He also declined to dismiss Thayer’s claim that Planned Parenthood illegally billed Medicaid for abortion-related services, such as blood tests and office visits for women who had their pregnancies terminated. Federal law bans Medicaid payment for most abortions.

Thayer’s relationship to Planned Parenthood was not discussed in the video beyond a description of her as a former employee. But a Catholic World Report article reported that Thayer maintained anti-abortion views for the entirety of her 17-year employment with the Planned Parenthood organization.

And again, the first sentence above isn’t correct. As readers can see from the image below, at 12 seconds into the video, an explanation of Thayer’s “relationship to Planned Parenthood” is clearly detailed in bold print, reading, “Sue Thayer, former Planned Parenthood Manager.” In the video, Thayer states that her center was a “family planning center” and says, “I trained my staff the way that I was trained.” She even names the city where her center was located — “Storm Lake” (Iowa) — but I guess LaCapria missed all that as well. 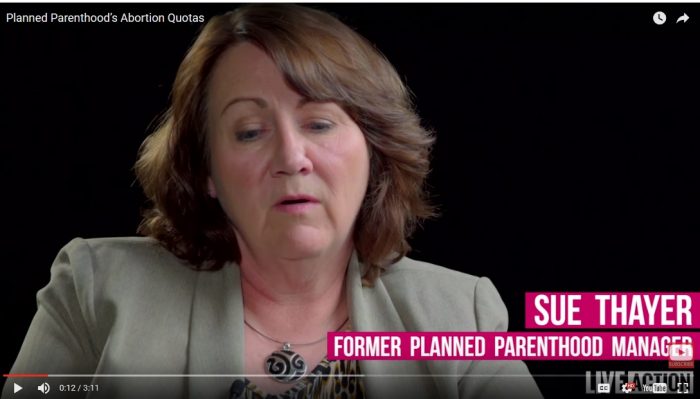 Planned Parenthood told us that an unborn baby is just a blob of tissue, and that it’s a woman’s right to have an abortion. I guess I bought into some of that. It’s a line they continue to spew out even to this day.

Thayer also stresses that money is a big motivator in the abortion business. She said, “It’s all about money. Each Planned Parenthood center has a goal of how many abortions they do each week. When I started, I thought Planned Parenthood helped women. Now I see it’s just a business.”

Like Thayer, Anderson accepted a position at Planned Parenthood despite her reservations about the clinic’s operations.

LaCapria essentially insists that because of Anderson’s and Thayer’s ambivalence about abortion, this negates their eyewitness testimony. This claim, of course, is nonsense. A Planned Parenthood employee’s opinion on abortion does not change what that employee witnessed while on the job. There are many abortion advocates who claim they are personally opposed to abortion but still think it should be legal. Would LaCapria disqualify all of their accounts as well?

Not only did Live Action provide video testimony from two witnesses with first hand knowledge, but Live Action president Lila Rose also thereafter provided on Facebook a copy of a certificate issued to a Planned Parenthood in Colorado for “exceeding abortion visits.”

“First, and plainly, Planned Parenthood does not have “quotas” for any of our services.

… no, we don’t have quotas. And, yes, we absolutely do celebrate our progress in ensuring that more people have access to the full range of reproductive health care, including abortion. And we always will.”

Yet earlier on in her statement, Cowart refers to the certificate itself — which LaCapria conveniently left out of her Snopes piece: 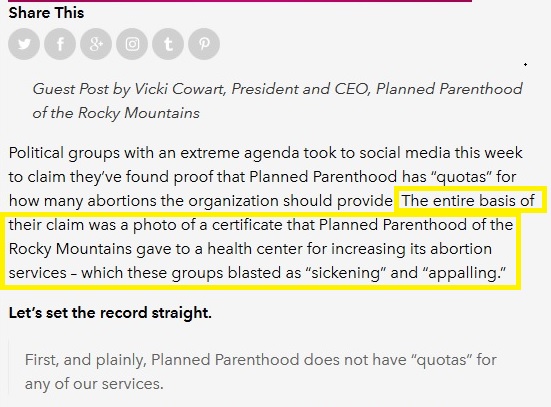 Whoops! Looks like Cowart actually confirmed that the certificate was authentic.

But Snopes seems too busy skirting the topic at hand to notice.

What’s really interesting is that LaCapria readily accepts as truth the two former Planned Parenthood staffers’ claims that they dislike abortion…but then completely discounts what they have to say about the organization’s abortion goals (or “quotas”). The latter is apparently “unproven” while the former is to simply be accepted without question. Is Snopes really just cherrypicking facts that put Planned Parenthood in the best possible light?

Snopes Cannot be Trusted as a Valid Fact-Checker

What this most recent Snopes post actually revealed was that, as far as Snopes’ fact checkers are concerned, holding an “anti-abortion” view automatically calls everything you say into question. For Snopes, it seems holding Planned Parenthood accountable or putting the organization’s spokespersons on the record just isn’t important. Simply repeat Planned Parenthood’s talking points and – voila! – Snopes’ alleged “fact checkers” can click “publish” — with little research and no messy explanations!

Live Action has shown time and time again through its undercover investigations that Planned Parenthood is not about primary “health care” services; it is abortion-focused.

Whether LaCapria and her Snopes editors want to admit the obvious is up to them. But Live Action News cannot allow a poorly researched Snopes “fact check” using unverifiable Planned Parenthood public relations talking points to go unchallenged.