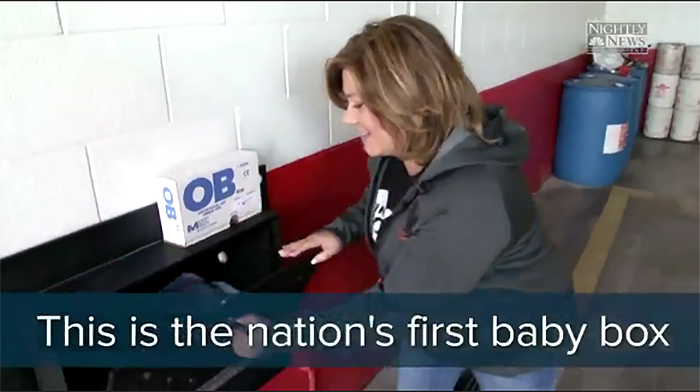 Monica Kelsey is a volunteer firefighter in Indiana. But she’s also a person who was conceived in rape, and has started a nonprofit group to help save babies who might otherwise be abandoned or killed.

Monica’s organization, Safe Haven Baby Boxes, raises funds to install “padded and climate controlled” boxes in various locations, and has recently installed two in Indiana. When a baby is placed inside, according to NBC News, “a call is immediately placed to 911, and fire and medical personnel are dispatched to the scene.” The door locks and there is a motion sensor inside. The baby is retrieved by emergency responders, taken to a hospital for examination, and then placed into the custody of child protective services.

All 50 states have passed Safe Haven laws, allowing mothers to anonymously surrender their children – but so many desperate women are still unaware that they have this life-affirming option. NBC News notes that since Kelsey’s organization placed the two new baby boxes in Indiana, she’s received “dozens of calls”…

Kelsey said her team received 95 calls on Wednesday, one of which resulted in a “safe surrender” in another state. The woman was inquiring about safe haven boxes in another state, she said, and hotline volunteers found the woman the nearest hospital where she could surrender her baby safely. Kelsey would not identify the state, citing confidentiality.

The Knights of Columbus has pledged to build 100 baby boxes throughout Indiana at a cost of $2000 each.

The idea of baby boxes received even more publicity following the release of the 2014 documentary, The Drop Box, about the story of South Korean pastor Lee Jong-Rak, who has himself taken in more than 30 children who were each placed in a baby box at his church.

Monica Kelsey told NBC News that baby boxes are important to her for a very personal reason: “I was abandoned as an infant back in 1973, so I’ve always been very close to the safe haven law,” she said.

Monica tells her story in the video below:

If you need help finding a Safe Haven location or if you want to speak to a licensed counselor, please call Safe Haven Baby Boxes at 1-866-99BABY1.