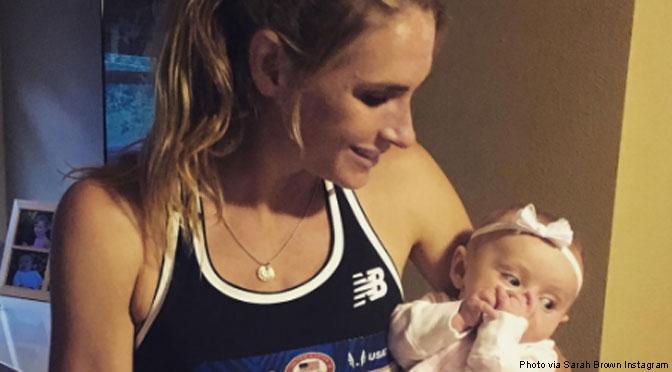 Runner Sarah Brown was in the midst of training for the Olympic trials last year when she found out she was pregnant. Favored to compete in Rio this summer,  she failed to qualify because her unplanned pregnancy slowed her down. But she doesn’t regret it for a second. The 29-year-old New Balance athlete didn’t qualify for Team USA at the Olympic trials back in July, despite being a strong contender throughout all of 2015 and running a personal best of 4:03.20 in the 1,500 in May—a time that’s faster than all the current Olympic finalists ran in Rio.

But her surprise pregnancy modified her training routine.

Brown may have been surprised by her pregnancy since she had a copper IUD, but she and her husband immediately chose life for Abigail. Brown wrote on her blog in September:

Hello world, my name is Sarah Brown and I’m pregnant. Wait…what? Pregnant? Did I just say that? The answer is yes, yes I did. If you know me, I am sure your mind is filling with endless questions. One of which is undoubtedly, ‘Why would one of America’s top 1500m runners decide to have a baby leading into arguably the biggest year in a track athlete’s career, an Olympic year?’ Well, the answer is actually quite simple. I didn’t.

I had a copper IUD. For those of you that have never heard of an IUD, it’s an intra-uterine device used for birth control. It is over 99% effective. It is the most effective form of birth control behind abstinence. I think you know where this is leading. I am the less than 1%. I am pregnant.

If you ask Planned Parenthood what a woman should do when her birth control fails, the favored option would be abortion. But the Browns went the opposite way. It turns out that becoming pregnant with an IUD is dangerous, but that only drove them to do everything possible to ensure their baby lived. Brown wrote:

I would like to take this minute to point out that I used the words “had an IUD” purposely. Getting pregnant on an IUD comes with many complications. First, you have the fear that the pregnancy is ectopic, meaning outside the uterus. This is very dangerous and can be life-threatening if left untreated. Second, if the pregnancy is viable, then you must decide whether to remove the IUD or leave it in. Both carry risks of miscarriage. My husband Darren and I decided to take the risk early on and have the IUD removed once we learned that my pregnancy was viable. We felt this gave us the best chance of having a successful pregnancy from that point forward.

Brown says she believes God chose to make her a mother then, and she said yes. She posted a picture of her ultrasound on her Instagram account: Brown did continue to train for the trials, and did so with her doctor’s approval. Brown chronicled her pregnancy through her training, partly to share her journey with others who might face similar journeys, she told Elle Magazine:

As a professional athlete I’ve always had to be very selfish with my time, and I’ve always wondered how people would balance it with motherhood. I thought: Which kind of goals do you pursue? Do I keep pursuing my running career, or do I stop running and have a family? Could you actually have both?

Brown modified her training throughout her pregnancy by running less mileage at a lower intensity than she would normally, and increasing her cross-training. She didn’t run at all from the 20- to 24-week mark of her pregnancy because of back spasms, but she was able to run 40 to 45 miles per week during her third trimester.

I got mile repeats for Christmas! ???? The best gift in life is doing what you love! Merry Christmas from The Browns! #teamnb @bteamrunning #road2trio

While ultimately Brown didn’t qualify for the Olympics, her Instagram post after failing to make the cut made it clear where her priorities were.

Brown was instantly smitten. “The love you have for this little person blows my mind… She brings me such a peace and balance in my life that I think has really benefitted me. I’ve always been the type of person that can get a little more uptight in situations or a little more anxious, and she has a really good calming influence on me. She really helps me stay in the moment and just really enjoy the moment…I think all around, this journey has just been a really awesome experience.

Brown’s unplanned pregnancy may have delayed her professional career, but being a mother is an unparalleled prize to the star athlete, who has now become a star mother to many adoring fans who are empowered seeing how Brown has maintained her career and embraced the joys of motherhood. Brown shows that pregnancy is not an accident, but a gift.