Kermit Gosnell was found guilty this Monday of first-degree murder in three counts, involuntary manslaughter, and 229 counts violating abortion laws in the state of Pennsylvania. As NBC Philadelphia, a local affiliate, reported, Gosnell is receiving two life sentences without the possibility of parole. In return, Gosnell will not appeal his guilty sentence. 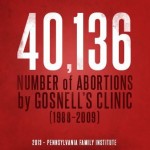 Gosnell being found guilty gave me a sense of relief. Whether he was found guilty of one or all counts of first degree murder, or any amount in between, I was going to feel relieved. Justice may have been imperfectly served, but it has been served nonetheless. I have already written a reaction piece on the guilty sentence for IY Coalition.

As pro-lifers, we know that Gosnell surely murdered more than three or eight or however many babies, because whether the abortions he performed were illegal or not, they were still acts of murder on innocent pre-born children. The Pennsylvania Family Institute created a graphic, which is currently the profile picture on their Facebook page, which states that from 1988 to 2009, 40,136 abortions were performed at Gosnell’s clinic. Forty thousand one hundred and thirty-six is a lot more than 3, of course, but I say let us still find a sense of relief and justice in allowing the 3 babies (who have been named Adam, Alex, and Chris) to represent all of the babies aborted by Gosnell.

It is worth noting that Gosnell was given the choice to strike the plea bargain that he did, to choose to live. As a graphic from Pro-Life Action League points out, unfortunately, his victims were not given such a choice. 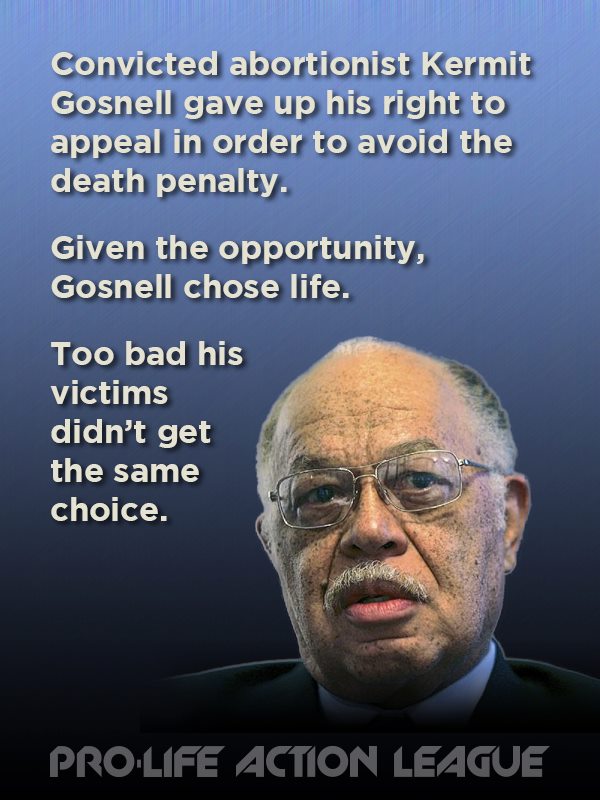 This trial and the sentencing has caused a wide range of reactions, understandably. I can understand being bitter and angry at what Gosnell has done, and at the laws (or lack thereof) on abortion in this country, but we have truly won some sort of victory here as a movement. Regardless as to if you believe in the death penalty or not, it is worth reading Abby Johnson’s piece about repentance. While judging from his behavior so far on the case, I do not find Gosnell’s immediate repentance to be likely, but I can certainly turn out to be wrong, and I hope that I do turn out to be so.