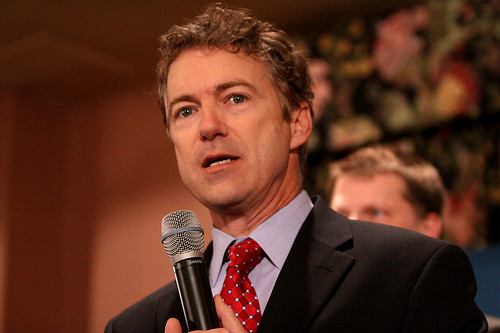 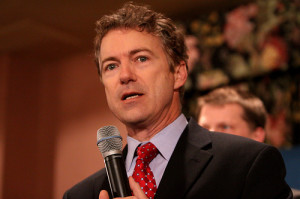 Rand Paul’s had a busy couple of weeks. In the midst of taking controversial stands on various issues, the Kentucky senator and rising Republican star introduced S. 583, the Life at Conception Act. Its operative clause reads as follows:

To implement equal protection for the right to life of each born and preborn human person, and pursuant to the duty and authority of the Congress, including Congress’ power under article I, section 8, to make necessary and proper laws, and Congress’ power under section 5 of the 14th article of amendment to the Constitution of the United States, the Congress hereby declares that the right to life guaranteed by the Constitution is vested in each human being. Nothing in this Act shall be construed to require the prosecution of any woman for the death of her unborn child.

In a statement announcing the bill, Paul declared:

The Life at Conception Act legislatively declares what most Americans believe and what science has long known- that human life begins at the moment of conception, and therefore is entitled to legal protection from that point forward,” Sen. Paul said. “The right to life is guaranteed to all Americans in the Declaration of Independence and ensuring this is upheld is the Constitutional duty of all Members of Congress.

Obviously, the bill is going nowhere in the Democrat-controlled Senate, and considering its brevity – it “legislatively declares” its intent to “implement” equal protection for the unborn, but doesn’t actually say how Congress would do so, what would happen when states flout it, etc. – it doesn’t seem like it’s meant to. It reads more like a general statement of intent and principles, a taste of what Paul would do with more power…like, for instance, the White House he’s considered a contender for in 2016.

So for what it is, so far so good. Keeping the goal in the public eye has its own value. Further, Paul should be commended for recognizing that abortion is a federal rather than state issue, a stand that will put him at odds with some of the libertarian purists in his fan base.

But then he went on CNN, where Wolf Blitzer asked him the most obvious question any pro-life politician would expect: “Just to be precise, if you believe life begins at conception, which I suspect you do, you would have no exceptions for rape, incest, the life of the mother. Is that right?” That’s when Paul said…this:

I would say that, after birth, we’ve decided that when life begins, we have decided that we don’t have exceptions for one-day-olds or a six-month-olds. We don’t ask where they came from or how they came into being.

But it is more complicated, because the rest of it depends on the definition of when life comes in. So I don’t think it’s as simple as checking a box and saying, “Exceptions” or “No exceptions.”

I’ve been there at the beginning of life. I’ve held one pound babies in my hand that I examined their eyes. I’ve been there at the end of life. There are a lot of decisions made privately by families and their doctors that really won’t, the law won’t apply to. But I think it is important that we not be flippant one way or the other and pigeonhole and say, “Oh, this person doesn’t believe in any sort of discussion between family.”

Soooo…we’re going to declare that life begins at conception and therefore that all of it should be protected. But there will be “thousands” of exceptions and decisions “the law won’t apply to,” and we don’t want to “pigeonhole” anyone into deciding between exceptions and no exceptions.

Paul’s convoluted answer is especially glaring in light of his avowed belief in clearly defining government power, and there’s no excuse for not having a clear answer ready to go. If Paul believes that abortion is valid only to save a mother’s life (which isn’t necessarily considered “abortion” anyway), just say it. If he’s willing to allow abortion in rape cases, come out and say it (preferably like this), own the implications, and let the chips fall where they may.

It also underscores how inadequate his bill would be in practice. If you don’t want exceptions, you have to spell that out. If you do, they have to be clearly defined, lest they be exploited so broadly as to render the entire ban futile. This shouldn’t be a difficult concept to grasp.

C’mon, pro-life Republicans. In 2012 we saw candidates implode because they defended their purist positions incompetently, and now we’re seeing Rand Paul flounder with the compromise position. We’re trying to save babies here, not sleep through a high-school debate club. Amateur hour’s over.

UPDATE: Steven Ertelt at LifeNews reports that Paul spokesman Doug Stafford has clarified that the senator meant only that “a singular exception to save the life of the mother would likely cover thousands of individual cases – for example, ectopic pregnancies or others that directly threaten the mother’s life.” Further:

The senator is not in favor of the more nebulous “health of the mother” exception that pro-life advocates argue can be applied to any woman facing an unwanted pregnancy.

But what about Paul’s statement that the Life at Conception Act may not be able to address early abortions? That, too, was a misunderstanding, according to Stafford. He said the senator was talking about things like emergency contraception pills, which may cause very early abortions, but since they contain the exact same drugs used in standard birth control pills, the senator believes they will be nearly impossible to ban.

Senator Paul “has always said it is not practically possible to legislate things like the morning after pill or other emergency contraception,” Stafford said. “It simply isn’t possible to do so. The law will likely never be able to reach that.”