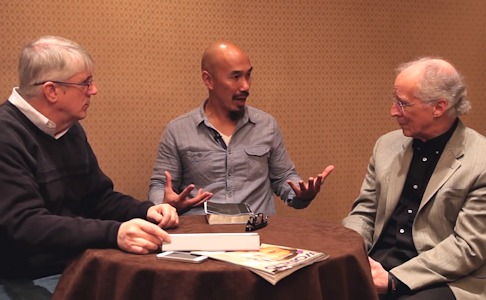 Just before the March for Life last month, three prominent U.S. pastors who are actively involved in the pro-life movement gathered for a round-table discussion of their work as pro-life ministers and the challenges they face in their ministry. The video of their discussion was sponsored by PassionLife, and the conversation centers on exposure to the reality of abortion, which includes the use of abortion images in order to bypass the semantic circumvention of the gruesomeness of abortion. The pastors explain that words like “abortion” do not call to mind the true reality of what abortion is until a person knows what abortion looks like.

The discussion was moderated by Pastor John Ensor, author of pro-life books like Answering the Call. Pastor John Piper illustrated the contrast between society’s willingness to use shocking images to demonstrate the reality of many historic human rights injustices, including slavery and the Jewish Holocaust.

I think if we’re honest, we’ll all say it’s the pictures left over from Dachau. It’s the pictures of the camps that revealed the horrors of it. You can say “murder,” you can say “six million,” but when you see the piles of bodies… I think there’s a place. It has to be done sensitively. It has to be done with a sensitivity to children… But if we’re afraid to look at what’s really happening as babies are torn limb from limb… we’re being dishonest. Because we will use those for any other issue we care deeply about.

Asked how to properly display graphic images, taking the proper pastoral care necessary to display images of abortion within his own church, Pastor Francis Chan explained:

We have a responsibility to preach the full counsel of God’s word, which includes Him being the giver of life, the creator of life, and protecting life, and not trying to usurp or take that authority away from him. The whole idea of not killing in this way, murdering, these are real commands. And we tend to pick and choose, and say “well, the people aren’t going to like that…” but I have to stand before God and say everything. This is a real issue. It’s prevalent in our world today.

Pastor Chan shares that he was confronted by women who were offended by his church’s display, because it made them feel bad about their abortions. John Piper chimed in, encouraging pastors to always address post-abortive women at the very beginning of any presentation:

You always address the women first, who have had abortions. You just assume they’re there, you tell them what’s going to be hard. You put the Gospel up-front, the glorious truth that there’s forgiveness.  And then you appeal to them: “The pain that you’ve endured, wouldn’t you love to spare others that? It may cost you to go there.” But I’ve found that the women who’ve had abortions have become our most firm advocates.