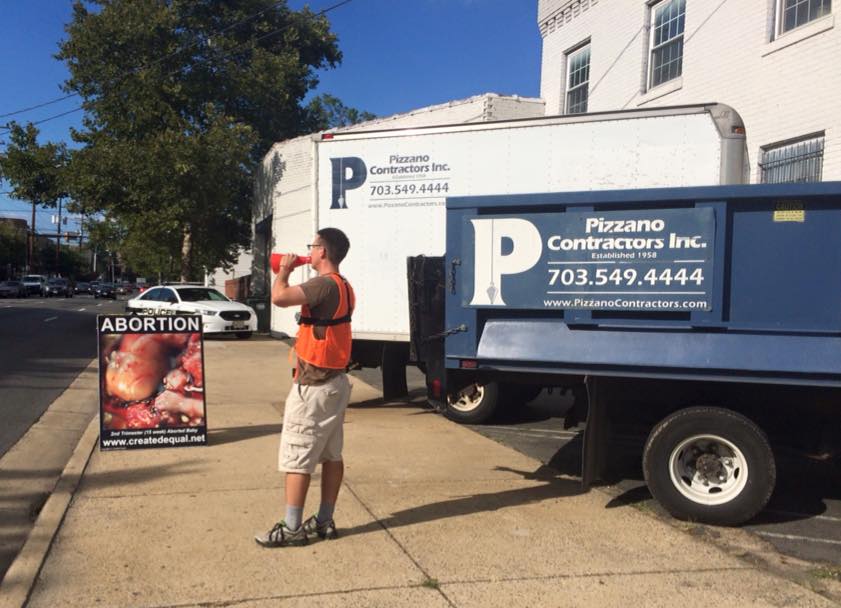 Pro-lifer Lauren Handy (pictured right), who considers herself a pro-life missionary, was recently issued an arrest citation for violating a noise ordinance while praying in front of a Planned Parenthood construction site.

In August of 2013, Planned Parenthood of Metro DC purchased the new building, located at 1225 Fourth St. NE, for $6.15 million, and  hired Pizzano Contractors to build the killing center. A video ad published by the Alexandria, Virginia, construction company says that what makes them great is “family” – yet they accept blood money used to kill babies. Not only that, but according to Restore-DC-Catholicism blog, the company is owned by Robert T. Pizzano, Jr. who graduated from a Catholic High School and was a member of the Catholic school’s Board of Governors later honored by the school for his role in founding a charity in the community. A current look at Pizzano Contractors’ website lists the Arlington Catholic Diocese as a client. According to Restore DC Catholicism, after the diocese became aware of Pizzano’s involvement with the construction of Planned Parenthood, they withdrew permission for their name to be listed as a past client.

Lauren Handy reports that a worker from Pizzano Contractors angrily cursed at her and sprayed muddy water toward her with a hose while she knelt down on the sidewalk to pray: I was kneeling and praying when the guy turned on the hose making the construction dust turn into mud. I told him I would not leave and continued to pray. It didn’t matter what they did to me….

At first I was by myself and felt a little discouraged because the guy was cussing at me… And then another prayer warrior showed up and immediately knelt in the mud with me.

Handy and other pro-lifers do not plan to stop the pressure on the construction company. “Being a voice for the voiceless is never popular and Pizzano will do anything to shut us down,” Handy said, “But I refuse to remain silent on the killing of innocent babies.”