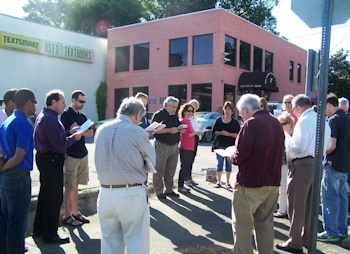 We have laws. Let’s enforce them.

Image via CEC for Life

An Alabama abortion clinic that had its license revoked last year is under fire for continuing to provide abortions. This morning, pro-life groups will be holding an emergency press conference in front this clinic, New Woman All Women, in Birmingham, Alabama. CEC for Life reports:

On Tuesday, March 19, at 11 AM, LLDF, CEC For Life, and other national organizations will hold an emergency press conference in front of the New Woman All Women facility (corner of 10th Ave and 17th St S.) regarding LLDF’s findings against NWAW and the Department of Public Health’s total lack of action.  National pro-life groups will call for an immediate shut down of NWAW, along with a full investigation.

The Alabama Department of Public Health (ADPH) has failed to respond to any information recently provided by Life Legal Defense Foundation (LLDF) regarding the possibility of unregulated and illegal abortion procedures at the Birmingham New Woman All Women (NWAW) abortion facility, which lost its license in May 2012.

New Woman All Women, the clinic infamous for the 1998 bombing by Eric Rudolph, was shut down last year. The Alabama Department of Health cited New Woman All Women after an investigation showed multiple problems, including “two instances in which patients were given overdoses of a drug and were transported by ambulance to a hospital” (Birmingham News).

Both clinics are owned by Diane Derzis, dubbed “the abortion queen.” Derzis’s two clinics are on their last legs, but they seem to be holding on by a thread. The Life Legal Defense Foundation says that thread shouldn’t exist in Birmingham, and today’s press conference will ask that the Alabama Department of Health take action and enforce its regulations against the facility.

In a letter earlier in the day, CEC for Life said:

The Alabama Department of Public Health has been informed of this activity and has failed to respond. Our attorney from Life Legal Defense Foundation, Allison Aranda, has contacted ADPH several times regarding these new developments, submitting evidence and inquiries. We have given them more than enough time to answer, but ADPH has chosen to remain silent. We must now rely on the power of the public.

ADPH is an office of the public; they exist to protect the lives of citizens, not to stand down and let an illegal abortion mill victimize and murder the women and preborn children of Birmingham. Remain respectful, but remind these offices that, as a citizen of Alabama, you deserve to know how an abortion clinic in Birmingham is being allowed to blatantly operate without a license. Be sure to ask for a full investigation.

According to CEC for Life, the immediate shutdown is supported by the following local and national organizations: