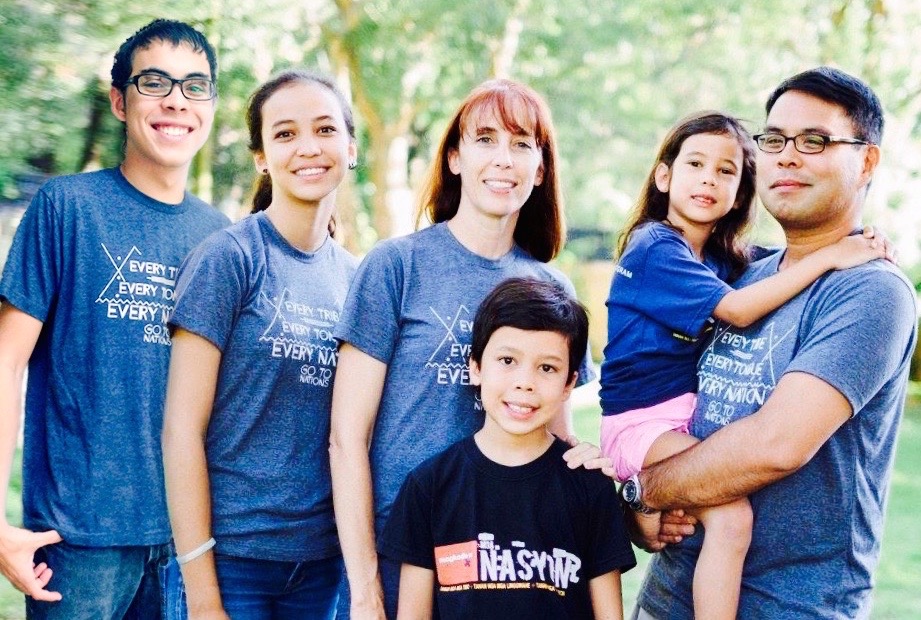 In a nation where women and children are sold for sexual exploitation, one mother and her family have become agents of change—living out a message of unconditional love. “The quest for love is really driving this degrading market,” says Christine Anasco, who has served for 12 years in international missions work with her husband David and their four children. “Our aim is show these women they are valued.”

Since moving to Thailand in 2014, the Anascos have come to know firsthand the faces of human trafficking. Every year, innocent people are trafficked worldwide by the tens of millions; the U.S. State Department includes Thailand on its Tier 2 watch list, one of many nations not fully complying with anti-trafficking policies though making progress.

Briefly in the United States to speak at churches backing their missions work, Christine Anasco reveals how pro-life outreach first inspired her, what motivates those trapped in sex trafficking, and why every believer should have a global outlook.

Bound4LIFE: During your formative years, how did standing for life start you on a journey of doing justice?

Christine Anasco: I recall one day in my high school health class, back in the early 1990s. They asked everyone to take sides—pro-choice stand on one side of the room, and pro-life on the other. Though I really didn’t know anything about the issue at the time, I went to the pro-life side.

Pro-life seemed like a better stand to take than pro-choice. Looking around, I realized I was the only one on that side; I thought, How can this be? Even in high school, I knew speaking up for life was important. Bound4LIFE: When did you become a follower of Christ?

Christine Anasco: I was raised in the church—so I knew religion, but the reality was distant. In my senior year of high school, a friend introduced me to what it means to have a relationship with Jesus. I became a Christian.

Being pro-life became even more a part of what I believed. I went to a very liberal women’s college, where everybody was pro-choice—except five or six of us on campus who were believers. Even in that small school, we would raise questions about abortion and have discussions.

I began to work at a pregnancy care center in Laurel, Maryland, counseling women who were thinking about abortion. After my husband and I got married, we ministered in a transition home for women who were single, pregnant and had no other place to go. We did that for three years. Seeing the value of every life has always been a huge part of what I believe in; it reflects the heart of Christ for justice.

Bound4LIFE: What led you to be involved in international missions and aid work?

Christine Anasco: Between my junior and senior year of college, I went to Trinidad and was awakened to the poverty that is in the world. Growing up in a suburban area of Maryland, I knew there were impoverished areas but I never knew how bad it could be.

Going to Trinidad opened my eyes. It really changed my perspective and what I wanted to do with my life. I went back again and the Lord began to work on my heart. It wasn’t an audible voice or anything, but the Lord spoke to me until I knew: This is something I want to do. I want to go and serve full time.

Since 2003, our family has served with the missions sending agency Go To Nations. After over a decade in the Philippines, we recently moved to Thailand.

Bound4LIFE: Why did you and your family’s missions team begin to serve people who are victims of sex trafficking?

Christine Anasco: As we saw the need in Thailand, the agency encouraged us to begin this outreach called Restoration 61—taking a stand against human trafficking. It is a reference to Isaiah 61, about bringing restoration to the hurting.

In this foundational stage, we are seeking what the Lord’s purpose is and where he would have us serve those in this industry—primarily women. Right now, we are starting where we can. We go to the red light district weekly and we talk to the women.

We are just building relationship with them. Our aim is show them they are valued, their lives have meaning and God really values who they are. Bound4LIFE: Understanding that every person’s journey is unique, are there patterns you see with those vulnerable to being trapped in this industry?

Christine Anasco: A lot of times, poverty is the main motivator in Thailand. Many of the women we meet come from the nation’s most impoverished areas, the rural farming areas. They have a financial need. But our organization has really wrestled with what the deeper need is; over time, what we’ve found is that everyone is looking for a form of love.

The quest for love is really driving this degrading market. Even the men who are coming to take part in the sex trafficking are looking for love. They are trying to find it; they are just looking in the wrong place. The desire of these women too is I need love. That’s their heart cry and it’s all of our hearts’ cry: we are looking for love.

Bound4LIFE: Some regard advocacy against sex trafficking as separate from pro-life outreach. Do you see the two as linked?

Christine Anasco: I see such a connection, because we are all created in God’s image. The pro-life movement often turns to Psalm 139, which speaks of how God formed each of us in our mother’s womb. God knew us, and He knit us together.

We tell the same thing to the women we meet: Jesus knows you, He formed you, He has a place and a plan for you. When they experience love, they can begin to shift from a mindset of fear to faith. Though trapped in human trafficking today, these women were created in His image and He has designed them for something more than what they are living.

God’s heart is for justice, and both of these areas are great injustices. His heart is to rescue both children who are being aborted and women who are in this industry. The sun setting behind Wat Arun, the Temple of the Dawn, in Bangkok, Thailand.

Bound4LIFE: Today in his message, your husband David said: “Seeing the sorrow the world is in is our greatest suffering.” When feeling such heartbreak, what is the key to being steadfast in your mission?

Christine Anasco: Sometimes it’s not easy. Sometimes it is hard to see people who are living in sin, doing things that you know aren’t good for them, or continuing to make poor choices. It does bring great sorrow. But Christ is our rock. Knowing his heart for them and for us, we desire to reflect how Christ really loves them and He hungers for relationship with them.

All of us can know that there will be an end to the suffering. In the end, every knee will bow and every tongue will confess that Jesus Christ is Lord. He will wipe away every tear. We can trust His greater plan.

Bound4LIFE: Clearly you’ve seen a lot in 12 years serving oversees with your family. Why should Christians be involved in world missions?

Christine Anasco: Simply put, Christians should be involved in world missions because that was the final thing Jesus told His disciples. He said, Go and make disciples of all nations.

There is such value in people coming to the mission field—whether for weeks, months or years. I was called to be a missionary because I went on short-term missions. For many, this is also their story: they went on one trip, their eyes were opened to see a different aspect of the world, then they were called to full-time missions. I don’t think you can put a price tag on that.

If you are called to stay in the nation that you were born in, then know your calling and live in it. But everyone is called to go in some way to a different nation; to send, to go and to pray for those who are doing world missions. As full-time missionaries with the nonprofit ministry Go To Nations, Christine and David Anasco are supported by generous donations from individuals and churches.

Josh M. Shepherd serves in communications at Bound4LIFE International—a grassroots movement to pray for the ending of abortion, carry the spirit of adoption, and believe for revival and reformation. He and his wife Terri live in the Washington, DC area. He previously served on staff at The Heritage Foundation, Focus on the Family and in the U.S. Congress.