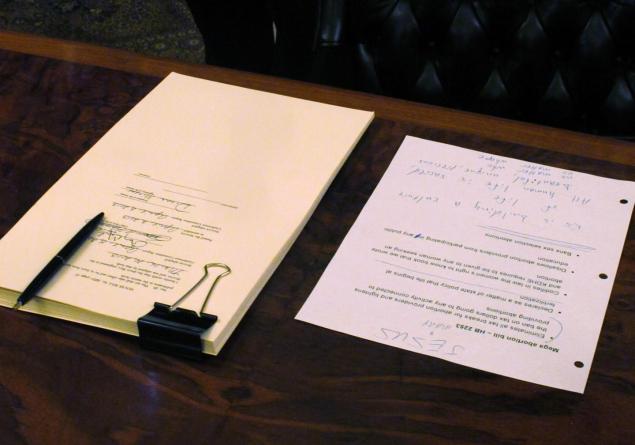 Wouldn’t it be nice to see understanding instead of outrage for once? 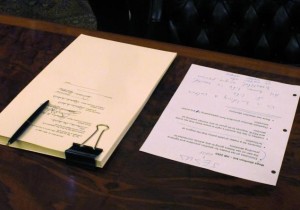 As outrageous as the barbaric evil they support is, the anti-intellectualism of the abortion lobby is almost as insufferable. In addition to their biological illiteracy, pro-aborts steadfastly refuse to learn how the Constitution works. The latest example is their freak-out over a photo of some curious notes on Gov. Sam Brownback’s desk:

An Associated Press photo taken before the signing shows a page of notes about the bill on Brownback’s desk that included a handwritten message at the top: “JESUS + Mary.” Further down the page were typewritten notes spelling out Brownback’s belief that the bill would create “a culture of life.”

Brownback’s office did not respond immediately to requests Friday afternoon for additional information about the notes.

Rachel Maddow’s hench-blogger Steve Benen predicts, “[W]hen the case reaches the courts, don’t be too surprised if the ‘JESUS + Mary’ writing at the top of the page becomes relevant.” Gawker and Democratic Underground’s commenters are incensed. And true to form, lying basket-case Amanda Marcotte is on the warpath:

[T]he note lays bare what’s going on with this and all other anti-choice legislation across the country: It violates the First Amendment’s prohibition against the government establishing religion. At their core, anti-choice laws are about imposing on the population as a whole the belief that some religions prohibit abortion, whether they are members of that faith or not.

It’s easy enough to quibble with the religious rationalizations for hostility to abortion, from the bad logic of insisting no woman gets to say no to pregnancy because Mary had a baby once to holding up a woman who gave birth as a virgin as some kind of exemplar all other women must try to live up to, which is basically impossible. But really, none of this matters: Americans have a right to believe anything they want, no matter how irrational. What they don’t have the right to do, however, is push their religious beliefs on others through force of law.

The First Amendment couldn’t be clearer: “Congress shall make no law respecting an establishment of religion, or prohibiting the free exercise thereof; or abridging the freedom of speech, or of the press; or the right of the people peaceably to assemble, and to petition the Government for a redress of grievances.” Telling the rest of us that our abortion rights will have to be restricted because “JESUS + Mary” is Brownback thumbing his nose at the establishment clause.

Sound and fury, signifying nothing.

I have no idea why Brownback wrote it. But I do know that some handwritten notes jotted down on a page of printed notes fall somewhere between “jack” and “squat” on the constitutional significance scale.

The absolute most it could possibly mean is that Brownback’s Christian faith motivated him to sign the bill. But that would be it – a motive. The First Amendment forbids laws “respecting an establishment of religion, or prohibiting the free exercise thereof” (and technically, it’s talking only about Congress, not state governments, but that’s another conversation). It says nothing about policing whatever intentions lead to enacting any given law; what matters is whether the law’s content establishes religion or prohibits free religious exercise.

Legally irrelevant scribblings on an unofficial document aside, this law clearly passes the test – the Constitution doesn’t protect the right to any abortions (sex-selection or otherwise), it doesn’t entitle abortion providers to any particular tax breaks or state contracts, and that individual human life begins at fertilization is a scientific reality, not merely a theological conviction.

In addition to carrying a distinctly un-American air, the prospect of legally disqualifying whole categories of thought from the political process would be utterly unworkable. Every position can be tied to religion in some way. Surely there are many who relate the necessity of theft, murder, and slander laws to the Ten Commandments. Barack Obama cites Jesus often, in a variety of contexts. Liberals often frame their policy goals around Christian charity. Heck, “biblical” cases have been made for abortion itself.

If the mere existence of religious reasons to for supporting something were enough to run afoul of the First Amendment, anything could be unconstitutional. Five seconds of actual thought would have led Marcotte, Benen, and the rest to the same conclusion…that is, if they had ever wanted understanding instead of outrage.