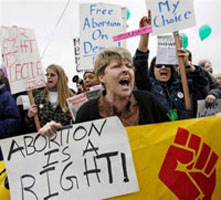 While I may be in Disney World for the rest of the weekend, some pro-aborts will be engaging in activities that are less family related. The Feminist Majority Foundation (FMF) and its Choices Campus Leadership Program have launched a sort of carnival, a blog carnival that is, known as “#AbortionMatters blog carnival,” which started on August 23rd and will run until August 26th. You can see the group calling for submissions for the “carnival,” which is part of “#31 Days of Unity” on their page here, as well as the heralding the start of the event here.

The Christian Post put forth a helpful piece about the group and the event, while Campus Reform includes statements from the spokeswoman of FMF, Kari Ross in their piece:

“One in three women will have an abortion by the time they’re 45, and yet we’re treating this like it’s some extreme procedure, when it can be a lot safer than even having your wisdom teeth removed, and is almost just as common,” said Kari Ross, who is the spokeswoman for the Feminist Majority Foundation (FMF).

Okay, so it shouldn’t be all that shocking that a spokeswoman for a pro-abortion organization would try to make abortion seem normal. Except that just because something may be “common,” does not mean it is morally right, or that it is healthy for women, or as Ross claims, safe. You may be in pain after having your wisdom teeth removed, but abortion brings about a different kind of pain; and that’s a pain that for many women, stays with you forever. It is a cost that takes a lot out of you, not only monetarily. For a woman who speaks for a feminist organization, she isn’t really doing a good job speaking for those who have been hurt by abortion.

Indeed, further in the piece for Campus Reform, Ross dismisses the event being offensive in any way, and seems to do so rather casually:

Ross dismissed concerns that some might find the word “carnival” offensive in the context of abortion, saying those concerns missed the “real issue.”

“We’re really highlighting the real stories of people’s experiences and not the over-politicized, exaggerated cases that we think of when we hear the word ‘abortion,’” she said.

Ross said the carnival is geared towards students in particularly because they “are some of the ones most heavily impacted.”

She does a nice job deflecting there, doesn’t she? Actually, what the “real issue” is involves abortion having to do with a dead baby and a wounded mother. As a blog post for the Creative Minority Report mentions though, “[t]he babies could not be reached for comment on their perspective.”

This event, and this group then, seem to be sadly incapable of  understanding abortion as it really is. Ross herself denies abortion being as serous as it is when she says “…yet we’re treating this like it’s some extreme procedure…” She also shuts down any debate concerning abortion pretty much when she refers to “the over-politicized, exaggerated cases that we think of…” Abortion advocates have a range of almost bi-polar and hypocritical opinions on an abortion, from this case treating it as it’s no big deal, to it being a painful and difficult decision which women make, but a decision we need to respect either way.

Such a group represents the unfortunate taking advantage of college students, all the while standing up for abortion, not women, and especially not the women who have been wounded by abortion.