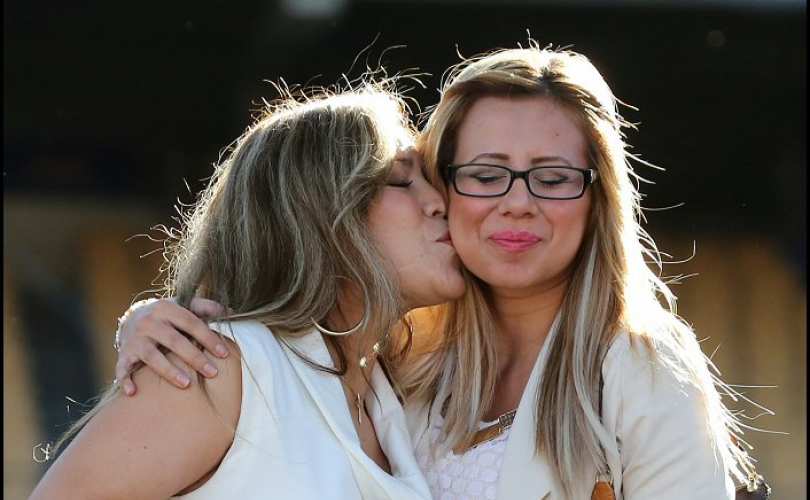 Lianna Rebolledo was just 12 years old and out walking near her home in Mexico City when she was suddenly abducted by two men and brutally raped. The attackers left the young girl half dead, her face and neck horribly disfigured. What the attackers did not know is that they also left Lianna with the stirrings of a new life within her.

“It was very violent. I honestly thought they were going to kill me,” she told LifeSiteNews in a video interview in Washington, D.C.

A doctor told Lianna that she did not have to live with the consequences of the rape. She did not have to hold onto something that would constantly remind her of that horrible night, she was told.  Abortion was her ‘right,’ she was assured.

But Lianna asked the doctor if abortion would help her forget the rape and ease her pain and suffering. When he replied ‘No,’ she realized that ending the baby’s life would not really benefit anybody.

“If abortion wasn’t going to heal anything, I didn’t see the point,” she said.

“I just knew that I had somebody inside my body. I never thought about who her biological father was. She was my kid. She was inside of me. Just knowing that she needed me, and I needed her…it made me want to work, to get a job [to support her],” she said.

Rape caused Lianna’s life to become a living hell. No matter how many times she showered, she could not rid herself of feeling dirty. The idea of suicide seemed to offer the young girl instant release from so much misery, but she began to realize that she had to think not only about herself, but about the future of this little life that was blossoming within her body.

Looking back, Lianna, 35, now realizes that her daughter saved her life and helped give her the healing she so desperately needed.

“In my situation, two lives were saved. I saved my daughter’s life, but she saved my life,” she said.

On top of this, she now sees that her life after rape gained purpose and meaning precisely because of her daughter, who is now 23 and recently graduated from university.

“It was really hard, but just to see that little person telling me how happy she was that I gave her her life. When she said that — and she was only four years old when she told me: ‘Mommy thank you for giving me life’ — I realized that she was the one who gave me my life back.”

“She’s always been there for me. She’s the only person who has shown me a real love. And I always will be grateful,” she said.

Lianna says she cannot imagine life without her daughter. Astoundingly, she says that she would go through all the humiliation, pain, and suffering again if it meant knowing and loving her daughter.

Lianna now lives in Los Angeles, California, where she runs Loving Life, a non-profit organization to help raped and pregnant women. She is also an international pro-life speaker with the message that every life, no matter how it began, is lovable.

Editor’s Note: This article originally appeared at LifeSite News, and is reprinted here with permission.