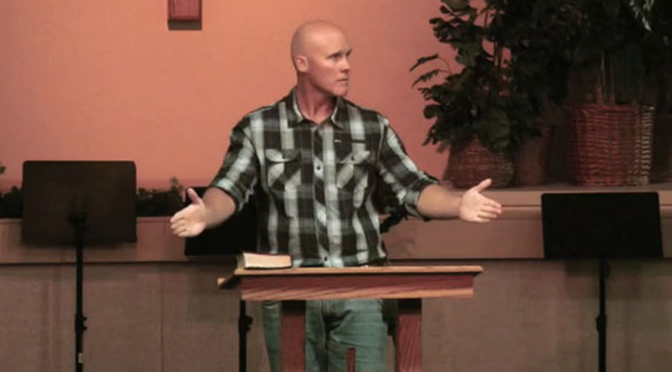 “There is a reason why ‘mother,’ ‘baby,’ and ‘abort’ have been changed to ‘a woman’s right to choose’; it’s a marketing ploy designed to hide a brutal practice.”

Those are the words of Shane Idleman, founder and lead pastor of Westside Christian Fellowship in Lancaster, California, who writes of the pain of consenting to his girlfriend’s abortion when he was young and had walked away from God.

After seeing an article called “Still-Silent Shepherds” last year in World Magazine, he was moved to action.

Approximately 23 years ago, as a prodigal, I conceded to my girlfriends request to abort our child around the 5th week of conception. The pain of that decision still haunts me today. What would they look like? Was it a boy or a girl? I can picture walking and talking with my child… watching his or her first steps… holding them when they cry and rejoicing with them when they succeed. But these are just dreams in my mind; dreams that often leave me heartbroken. Regret is one of the hardest pains to deal with because it is a constant reminder that we failed… failed God, others, and the aborted child.

Groups such as Planned Parenthood say that there are little, if any emotional scars for the women involved… the baby is just tissue. This is very deceptive—the emotional scars can last a lifetime. And it’s not just women who feel the pain, the men often carry tremendous guilt as well.

He admits he almost didn’t publish his story, saying, “This article was extremely difficult for me to write — I shed many tears, contemplated deleting it, and prayed diligently for direction. But I cannot, and will not, remain silent.”

When he published his confession, he did more than confess a past sin; he uses it to offer hope and call pastors into speaking out against the tragedy of abortion. He details the hope he found in Christ for healing, and also how “a few years ago, with my wife’s support, I was able to locate the woman who had the abortion. I apologized and asked for forgiveness. She did the same. This one act of forgiveness brought tremendous closure and peace.”

While it’s impossible to undo an act like abortion, it is possible to find hope and healing. But he says more pastors need to speak out about this atrocity:

Pastors… make no mistake about it: We play an enormous role in shaping the direction of the country. We can no longer remain silent while silent screams go unheard. Deep repentance must take place at the individual and national level; our consciences have been seared. Our job is to preach the totality of God’s Word, including those things that are hard to hear, so that both conviction and comfort take place. When human life is devalued, atrocities such as the holocaust, slavery, sex-trafficking and abortion occur. God help us when we ignore our calling to confront evil. Pastors are to be pillars who support truth. When was the last time your pastor discussed this controversial topic from the pulpit? Change will not occur until we confront sin rather than hide from it. “We need more prophets in our pulpits and less puppets” (Leonard Ravenhill).

Today, the truth is often neglected, watered down or avoided altogether in the hope of not offending and building an audience. Abortion is rarely mentioned so repentance is rarely sought and hope is elusive. We want to build a church rather than break a heart; be politically correct rather than biblically correct; coddle and comfort rather than stir and convict.

For Idleman, “the need to address silence in the pulpit about abortion outweighs the pain of releasing it.”

Idleman’s article shows courage and offers hope to many. Churches are filled with those who have had part in abortion, but rather than ignore the topic out of fear of condemning, churches can offer hope for healing and forgiving, opening the door to experiencing greater freedom.

But as Idleman notes, it has to start at the top. When the pastor is able to take the lead on an issue like this, the people will follow. Idleman’s courage creates a culture in which post-abortive women can know they are able to be loved and accepted, where prodigals like Idleman can discover healing rather than carrying a deep-dark secret.

Abortion is not the unforgivable sin, and while the baby can’t be resurrected, Idleman shows that repentance isn’t about condemnation but healing.