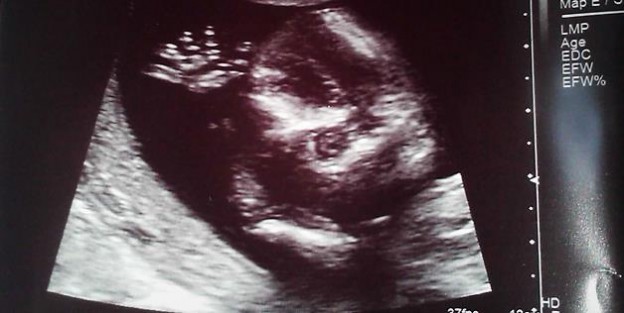 From Dr. L. Lacroix of Planned Parenthood on why women should not see ultrasounds of their babies before their abortions:

“Abortion is a hard enough thing for any woman to decide without the torture of seeing the baby on an ultrasound screen.”

Planned Parenthood has a long history of opposing informed consent laws that would allow a woman to see  an ultrasound. Even when the proposed law would not require her to view the ultrasound, but only says she must be given the choice to view it, Planned Parenthood still protests.

Is seeing an ultrasound of one’s baby a form of torture? It’s true that seeing a picture of the baby she is carrying might make abortion harder for a woman to rationalize. The sight of her baby may indeed invoke strong emotions. An ultrasound would reveal what’s at stake in her decision. It may be more difficult for her to abort after she has seen the features of her child.

But are women so weak that they can’t handle upsetting information? Is seeing their preborn baby before agreeing to destroy him or her something women can’t handle?  Women are not so fragile that they must be protected from the truth. Saying that women can’t handle unpleasant truths about their own medical care is insulting to all women. The fact that those making this argument claim to be feminists only highlights their hypocrisy.

Pro-choice groups often say that pro-lifers give inaccurate information to abortion-minded women. But it is undeniable that ultrasounds show the truth. They are simply pictures. They show the baby who is there without embellishment or exaggeration. They show what is in the woman’s womb – no more, no less. Ultrasounds, by their very nature, can’t lie.

Is it better for a woman to abort, thinking she is getting rid of a few cells or a shapeless mass only to discover that her baby was fully formed, or is it better for her to know the facts beforehand? The facility may try to prevent her from seeing the image, but they won’t be there to censor abortion information from her for the rest of her life. It is likely that she will eventually learn facts about fetal development and the appearance of a preborn baby.

Perhaps she will see the ultrasound of a future pregnancy or a friend’s child; however, the abortion facility workers won’t be there to support her when this happens. The woman may have to deal with feelings of shock, anger and regret on her own. If she does regret her abortion, it is often pro-lifers, not abortion supporters, who will help her heal. Pro-life activists run many post-abortion support ministries, such as Silent No More.

I have heard and read countless stories from former abortion patients, saying the facilities turned the ultrasound screen away from them. In some cases, the mother asked to see the image, only to be discouraged by facility workers.

One abortion provider, quoted in American Medical News, admitted that she regularly turned the ultrasound away from abortion patients.

Planned Parenthood will claim that they show women the ultrasound on request, but that leads one to wonder: “Why would Planned Parenthood waste time and resources opposing laws that tell their clinics to do something they already do?”  It’s true that the waiting period attached to most of these laws is one of the reasons pro-abortion groups fight the laws. But the quote above indicates that the ultrasound requirement is also a reason behind Planned  Parenthood’s attempts to block informed consent laws.

Do abortion workers trust women to make informed decisions about their medical care? Sadly, many providers seem to think women shouldn’t have all the facts about the life-changing decision to have an abortion.