Last week we reported on Planned Parenthood  Gulf Coast in Texas being fined $1.4 million for misappropriation of public funds. Perhaps we are so used to seeing such terms used in headlines across the national media that we have become desensitized to the magnitude of this implication. In fact, this is a problem that should deeply trouble us, recognizing the lies that make up the largest abortion provider in our country—the abortion provider who receives millions of dollars annually in public money.

In the case of Planned Parenthood  Gulf Coast:

Let’s break down this statement and remove the language desensitization:

That means, in plain speak, they made stuff up. They literally lied and invented material information, perhaps about you and your health care, your medical history, your needs. They changed the reality of actual patients situations.

So, in essence, the investigators found that Planned Parenthood created fraudulent documents in order to gain more public money. Note the phrase from the news release, which shows that this was a settlement to which Planned Parenthood agreed as well:

Occasionally people will find sympathy for people who do desperate things for money. We know it’s wrong, for example, to steal food, but if a poor man does it, we might not be as disgusted. So was Planned Parenthood really that poor and so concerned with women’s health they created fraudulent documents? 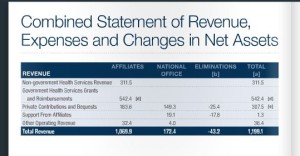 And yet, as the Attorney General reports:

The point of the report is that this wasn’t an accounting error but willful fraud, created to deceive the state and federal government in order to gain more money—because apparently almost $8 million from Medicaid wasn’t enough. With over $20 million of revenue in its last reported year and net assets listed on its tax form of $47,563,531, it really is hard to comprehend statements such as the ones the organization makes about it being “forced to close” due to funding problems.

It was, in fact, the same Planned Parenthood affiliate, who announced at about the time of this investigation that it would be closing three of its offices in that region, including one that does abortions.

In response to the closures, Melaney A. Linton, president and CEO of Planned Parenthood Gulf Coast, said in the Huffington Post:

“In recent years, Texas politicians have created an increasingly hostile environment for providers of reproductive health care in underserved communities. Texans with little or no access to health care services have been deeply affected by state budget cuts to programs provided by Planned Parenthood health centers and dozens of others that provided lifesaving cancer screenings, well-woman exams and birth control.

“The combined impact of years of budget cuts to women’s health care services and the dismantling of the successful Women’s Health Program will take affordable, preventive health care options away from women in Bryan, Lufkin and Huntsville — just as these policies have taken health care away from an estimated 130,000 others — when Planned Parenthood Gulf Coast is forced to close these family planning health centers at the end of August.”

These statements are fraught with emotionally-charged language that is simply untrue. First, why close locations in places like Lufkin, which is more rural than the many locations in the metro Houston area, if the focus is on meeting needs of women without other options? Second, making broad generalizations that Planned Parenthood can be the only health care provider for these women and they will be left without basic health care is astounding and inaccurate. Planned Parenthood provides only one kind of health care even in the limited non-abortion services it does. No woman has ever, for example, received a mammogram from a Planned Parenthood provider. That’s basic health care, not abortion.

But finally, the statement that “Planned Parenthood Gulf Coast is forced to close these family planning health centers” is quite problematic. The state didn’t shut the clinics down; Planned Parenthood has made its decision. Blaming the changes the state made is incorrect, as the changes were only for places that provides abortion services. By stopping abortions, Planned Parenthood would have continued to recover its funding. But abortion is its cash cow.

And now we know that it milks the cow any way it can. It wasn’t the state of Texas that perpetuated financial and governmental fraud at taxpayer and patient expense. If anyone is forcing the centers to close, it’s Planned Parenthood itself which has been found to misuse its funding. This wasn’t an accounting error. And it should be addressed to the women it claims to care so much about servicing.

While Planned Parenthood might like to spin this politically, the fact is, the fine was agreed to by the organization itself, not imposed without choice. It was the settlement it made with the state—a settlement of its accusations of financial fraud.

When have we ever known Planned Parenthood to settle?

Total fraud payment by Planned Parenthood was actually $4.3 million, three times more than announced (the state of Texas just announced the portion they received at $1.4 million)