As members of the 115th Congress were sworn in Tuesday, Planned Parenthood issued a frantic response to the group of pro-life lawmakers who now make up the U.S. House and Senate. In a tweet, and in a separate fundraising e-mail, the abortion chain called the new Congress “the most dangerous moment in PP’s history.” 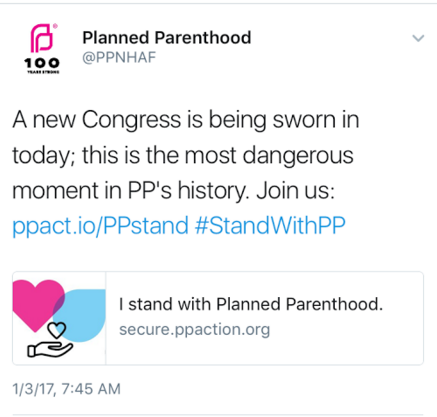 Lawmakers, along with President-elect Donald Trump, have vowed to defund Planned Parenthood and redirect taxpayer dollars away from the abortion chain to comprehensive clinics offering holistic health care. The House and the Senate came close to defunding Planned Parenthood in 2016, but President Barack Obama vetoed the measure. With the new Congress and president, however, there is a clear path to ending the taxpayer funding of abortion.

In a fundraising e-mail, Planned Parenthood President Cecile Richards vowed that the abortion giant will “fight like hell” in 2017 to protect its federal subsidies.

“A new Congress is being sworn in today — which means we are entering the most dangerous moment in Planned Parenthood’s history,” Richards said. “Without the promise of a presidential veto, there’s only one thing that can stop this destructive agenda: Us. You, me, and millions of Planned Parenthood supporters locked arm in arm.”

Planned Parenthood’s federal funding has come under intense scrutiny over the last few years, receiving strong criticism after videos released in 2015 showed its top executives bartering over the body parts of aborted children. The abortion chain, which has also been cutting down on health services while expanding the number of abortions, is increasingly showing that its focus is on abortion, not on women’s health care. Planned Parenthood receives over $500 million in taxpayer funding every year.