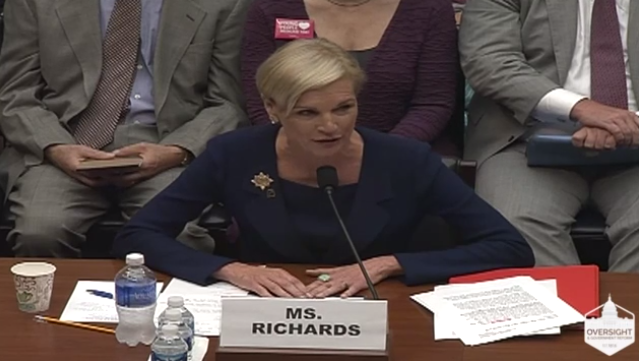 Planned Parenthood’s president appeared before Congress Tuesday to testify on the abortion business’ role in the trafficking of fetal body parts. In a hearing before the Oversight and Government Reform Committee, Cecile Richards claimed the organization abides by the law, despite numerous videos showing top-level Planned Parenthood executives haggling over the body parts of aborted children.

During the hearing, Planned Parenthood President Cecile Richards was questioned on the organization’s lobbying efforts, lavish expenditures and salaries, and the over $500 million it receives in taxpayer funding.

When questioned on why she apologized for callous statements made by Dr. Deborah Nucatola, senior director of medical services at Planned Parenthood Federation of America, in the first video, Richards stated she apologized for Nucatola’s tone. The Planned Parenthood president, however, said she is grateful for the “compassionate” care exhibited by Nucatola, stating, “I am proud of her.”

Nucatola’s horrific statements reflect that the care patients receive from Planned Parenthood is, however, far from compassionate. Nucatola, who was the first abortionist to be featured in undercover tapes by The Center for Medical Progress, cavalierly discusses crushing the bodies of aborted children during a lunchtime conversation with investigators posing as a tissue procurement company.

“I’d say a lot of people want liver,” Nucatola said. “And for that reason, most providers will do this case under ultrasound guidance, so they’ll know where they’re putting their forceps.”

“We’ve been very good at getting heart, lung, liver, because we know that, so I’m not gonna crush that part, I’m going to basically crush below, I’m gonna crush above, and I’m gonna see if I can get it all intact.”

Nucatola even describes how she manipulates the abortion procedure to obtain intact baby parts—even changing the “presentation” of the preborn child in order to better harvest his or her organs.

No matter what her spin, Cecile Richards’ words can’t take back what high-ranking officials at Planned Parenthood already said when they didn’t realize they were being recorded.  The undercover video footage is undeniable, and it shows Planned Parenthood violating at least three federal laws in its criminal baby organ-harvesting operation.

In the hearing today, Richards offered no defense of Deborah Nucatola’s remarks that Planned Parenthood ‘can do a little better than break even’ when it sells the baby organs it harvests. Richards herself in a letter to Congress admitted to charging $60 per body part, which could bring in over $500 per aborted child in addition to what it charges for the abortion itself – significantly more than the legally allowed reimbursement of “actual costs.”

When asked about a Stem Express worker who admitted she cut open the face and harvested the brain of a baby whose heart was still beating, Richards avoided discussing it, claiming that she’s only responsible for her employees, not vendors who work in her facilities.

Richards continued her disinformation campaign in the hearing, including the lie that abortions only comprise three percent of Planned Parenthood’s services, something the Washington Post has declared misleading, as Planned Parenthood absurdly equates an abortion with a urine test.

Congressional investigation is good, but there is already an overwhelming body of evidence that exposes Planned Parenthood’s abortion-centric agenda and their abusive practices. American taxpayers should not be forced to subsidize an organization that profits off criminal behavior and the inhuman practice of harvesting and selling aborted baby body parts.

Lawmakers are considering Planned Parenthood’s government subsidy in the wake of horrific video evidence that shows the abortion giant profiting off the destruction and exploitation of human life.

In a statement before Congress, Rep. Jim Jordan of Ohio noted that federal funds would be better spent on health clinics that truly uphold the health and welfare of women.

“We simply want to shift the money from the 700 Planned Parenthood clinics,” Jordan explained, noting federally qualified health clinics that could replace the abortion giant.

There are currently over 13,000 comprehensive health care facilities across the United States that serve women and children, and do not do abortions.