About 5,400 of the organization’s [Planned Parenthood of New York City] 50,000 patients live in Queens, said Joan Malin, the group’s chief executive, and the new center is expected to eventually handle 17,500 each year.

Not only this, but the specific plan is to entrap poor women, many of whom are minorities.

As The Times reports:

While there are other women’s health centers in Queens that offer abortions, the absence of a Planned Parenthood was “something that had to be corrected,” Councilman Jimmy Van Bramer, Democrat of Queens, said.

“We know that we have a significant population in Queens that are uninsured or underinsured,” Mr. Van Bramer said. “And we need quality health care that is tailored to their needs.”

As I wrote in a previous article about Planned Parenthood of the Rocky Mountains:

Science doesn’t matter, apparently. Facts and truth don’t matter. Every woman, according to this Planned Parenthood president, can decide for herself when life begins – even though there are hardcore facts surrounding this issue. And even though a determination that life begins at, say, 6 months after birth is dangerous and unquestionably false. Such a statement supports infanticide and the killing of children at any age, based simply on the whim and decision of their mother.

Live Action investigated multiple Planned Parenthood clinics to determine if women were being given accurate information.

A series of hidden camera videos shot in clinics across the United States reveals the exploitative tactics abortionists and clinicians employ to conceal the truth about abortion from women who most need honest and accurate information. Leading embryologists have denounced Planned Parenthood’s conduct caught on tape as “erroneous and scientifically absurd.”

The American Medical Association’s Code of Medical Ethics states that “The physician’s obligation is to present the medical facts accurately to the patient.” Anything less demands the immediate revocation of medical license and full prosecution under the “informed consent” statutes that exist in nearly every state.

This “quality health care” provider refuses, time and again, to accurately inform women of the possibility that they themselves might be injured or die during an abortion. Even though Planned Parenthood’s unsafe practices and lack of care were responsible for the death of Tonya Reaves and multiple other life-threatening injuries to women, the abortion giant still tells women that it is a safe place to go: 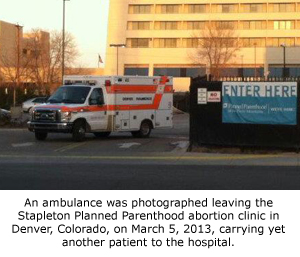 A photo taken at one of Planned Parenthood’s abortion complexes.

So, not only is this health care disaster (that specifically targets poor women and minorities) coming to Queens, but it’s also being funded by the taxpayers. Did they get to vote? Nope.