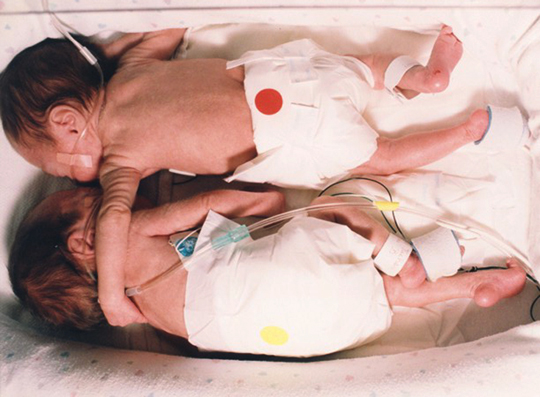 Brielle and Kyrie Jackson were born premature on October 17, 1995, a full 12 weeks ahead of their due date. As standard medical practice, doctors at The Medical Center of Central Massachusetts placed the twins in separate incubators in order to reduce the risk of cross-infection. The stronger twin, Kyrie, began to gain weight and her condition improved, but her sister, Brielle, had trouble breathing. Brielle’s oxygen level was extremely low and she had difficulty gaining weight.

On November 12, Brielle’s condition dropped to critical. Her tiny arms and legs turned blue as she lay gasping for air. Her heart rate skyrocketed, and her family watched in tears as they prepared for the possibility that Brielle would not make it.

The medical staff tried everything to save tiny Brielle, but no remedy seemed to work–then, Nurse Gayle Kasparian sought parental permission to place Kyrie in the same incubator as her struggling sister. The practice, used commonly among medical centers in Europe, was almost unheard of in the United States– but as soon as Nurse Kasparian placed Kyrie in the same bed, Brielle moved close to her sister and her heart rate began to steady.

Within a few minutes, her blood-oxygen readings miraculously began to stabilize. As Brielle started to fall asleep, her sister wrapped her left arm around her, and Brielle’s body temperature increased to normal.

Kyrie’s “Rescuing Hug” has garnered the attention of CNN, Life Magazine and Reader’s Digest, and has sparked an interest in the practice of co-bedding premature twins, triplets and quadruplets. The University of Massachusetts Memorial placed roughly 100 sets of premature multiple birth siblings in the same incubator. In all cases, doctors  have not reported a single case of infection between the newborns. The twins, who are now all grown up, still share the same tight knit bond they had when they first entered the world.