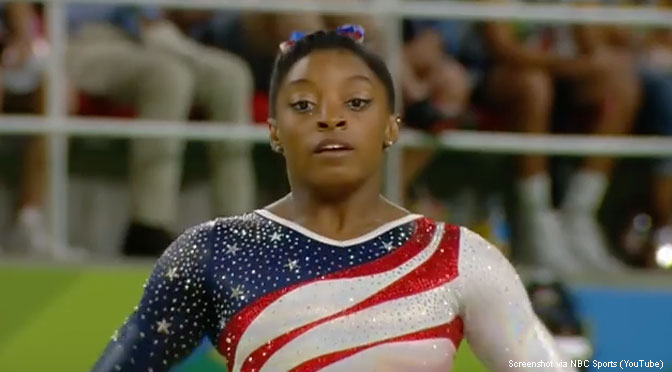 When 19-year-old Olympian Simone Biles does her signature move, the “Biles,” crowds go crazy.  Fans may adore the 4 foot 9 inch, three- time world all-around champion, but no one is as proud as her parents. Simone’s parents have been with her from the early days of seeing her tumble in their living room to witnessing her rise as one of the world’s greatest athletes. What makes Simone’s family unique is the fact that her committed and loving parents are also her grandparents.

Simone was born to a drug addicted mother. Her mother’s abuse placed Simone and her siblings into the foster care system. When Simone was three years old, her maternal grandfather Ron and his wife Nelly took her, her younger sister Adia, and two older siblings into their home. The children remained with their grandparents temporarily for two years until their mother lost parental rights. At that point Ron and Nelly adopted Simone and her sister Adia and Ron’s sister adopted the two older siblings.

While Simone’s story is inspiring, to her it’s simply normal. She told TIME magazine,

When I was younger, I thought every kid was adopted…I didn’t understand why people made it such a big deal. To me it’s just normal.

Simone may not see her story as a big deal yet, but it’s an important one because she publicly represents thousands of children whose stories we don’t often hear. According to the 2014 latest statistics from the U.S. Department of Health and Human Services Children’s Bureau, approximately 415,129 children are in foster care.  Out of 415,129 children, 29% are placed in relative foster family homes.

Similar to Simone’s experience, there are other beautiful stories of children in foster care finding forever families. My friend Natalie and her son Braxton are an example of a foster to adopt success story. However, other children will age out of the system still yearning for families to call their own.  CNN reports that in 2012, 23,439 children in foster care turned 18 and were “aged out” or “emancipated” in the U.S. For young women who ‘age out,’ stats show 71% of them will become pregnant by the age of 21.

Projects like The Storyboard are vital because many need a better understanding of the foster care system and adoption. After NBC’s Olympic news reporter Al Trautwig wrongly tweeted, “They may be mom and dad but they are NOT her parents” in reference to Simone’s grandparents, the Washington Post released an article titled, “As seen at the Olympics, there is still a lot of ignorance about adoption.” I agree with that title and would add that the ignorance extends to foster care.

I’ve engaged in discussions concerning abortion in which someone says, “If an unwanted child isn’t aborted they’ll just end up in foster care.” What does that sentiment express to children in foster care?  It implies that being in foster care is a fate worse than death. Foster care is associated with neglect, abandonment, pain and suffering. I understand that no one wants a child to experience that. Yet there is also great beauty and courage in the lives of children in foster care. There are thousands of loving and sacrificial foster parents who are changing the world by taking in children. People who support or encourage abortion based on fears an “unwanted” child will end up in the foster care system believe the pro-choice mantra, “Every child should be a wanted child.” However as we see with foster care and adoption stories, just because a birthparent doesn’t want a child or isn’t able to care for one, doesn’t mean someone else won’t. Simone’s story proves that reality. Even without her great accomplishments, she is valuable simply because she is a person. If she was never adopted, remained in foster care and eventually aged out of the system, she would be just as worthy of living. In our excitement over the life of this amazing overcomer, let’s remember those who are currently in the system. If we care for these children, they can be our champions for tomorrow.