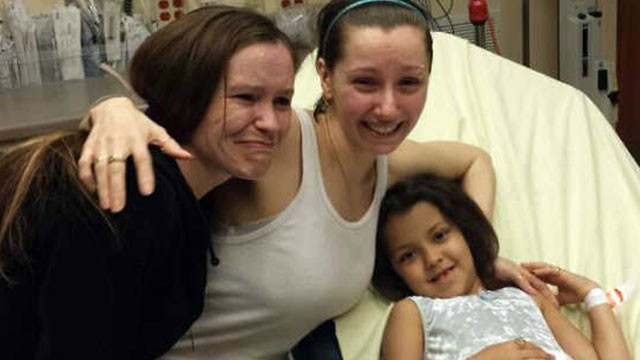 In Ohio, friends and family of three kidnapped women are rejoicing. Amanda Berry, Gina DeJesus, and Michelle Knight are now reunited with the people who love them most. The young women had been held in captivity for a decade by Ariel Castro, a man who reportedly kept them in chains, raped them, and beat them in a dungeon-like area of his home. We learned on their day of freedom that in the midst of this tortured existence, there was also a light of hope. Amanda Berry gave birth during her imprisonment to a daughter, Jocelyn, whom she conceived as a result of rape. We have also learned that, despite everything, it was Amanda Berry who never lost hope that she, her fellow captives, and Jocelyn could be free and prosperous.

According to media reports, hopelessness took its toll on Gina DeJesus and Michelle Knight, who had both “succumbed” to the “reality” of captivity even as all three were forced to have sex with their captor. These rapes resulted in at least six pregnancies. Michelle was the victim of forced abortion and lost five babies at the hands of Castro. Jocelyn is the only child who is known to have survived.

As a mother myself, I understand that our kids need us, but we also need them. They keep hope alive in us at all times, even when things may seem at their darkest. Perhaps it was Jocelyn who kept hope alive in her mother, and now Jocelyn is herself free thanks to the perseverance of her mother.

Jocelyn had been delivered in the most deplorable conditions one could imagine, with the assistance of Michelle Knight. Remarkably, Castro reportedly threatened to kill Michelle, the victim of five of Castro’s forced abortions, if Amanda’s baby did not survive.

When Berry went into labor, Ariel Castro, now charged with kidnapping and rape, grabbed captive Michelle Knight and told her to deliver the baby.

The baby was born into a plastic tub or pool to contain the afterbirth and amniotic fluid.

When the baby was born, it stopped breathing and everyone started screaming, the source said, citing the girl’s account. Castro allegedly said, “if that baby dies, I’m going to kill you.”

“What’s most incredible here is that this girl who knows nothing about childbirth was able to deliver a baby that is now a healthy 6-year-old,” the source said.

It is impossible, perhaps, to imagine more horrific circumstances for a woman than to be held captive and raped. There are two main components in healthy sexual intercourse: (1) the unity of the two people involved in the act, and (2) procreation. Sex is fulfilling to a woman when she is offering her body willingly as a gift. Life springing forth from the gift of yourself to your husband is the ultimate fulfillment in being a spouse and a mother. A rape situation, then, is arguably the height of horror for any woman. To rape a woman is to rob her of the precious gift of herself. When Ariel Castro kidnapped Amanda Berry, he robbed her of her freedom, but when he raped her, he robbed her of herself. Castro placed himself in the position of total control of everything that belonged to her alone.

This is the evil of rape. It is also the evil of abortion. As rape robs a woman of the precious gift of herself, abortion robs children of the precious gift of themselves. The ultimate violence is to rob someone of himself. Rape and abortion both do that. The good news is that even from such deplorable circumstances, as is so often the case with woman who carry babies conceived in rape to term, Amanda was able to see in Jocelyn the joy in life and the hope of tomorrow. Children will naturally be sources of joy and hope to their parents, provided that we have not given up on ourselves and on their potential to do that for us. Children in the womb are not “potential life.” They are truly living human persons. What is “potential” about them is joy and hope for us. Provided that we let them live, we will know joy and hope in them. If we do not let them live, that joy and hope will never be.

What are we to make of Castro’s alleged remark, then? “If that baby dies, I’m going to kill you,” he reportedly said. From a person so committed to the evil of bondage and rape, it is no wonder that we would hear about a threat of death. Why would he want this baby to live, especially considering that so many others did not survive his brutality? This is a matter for much debate, but there is no doubt today that Amanda Berry loves Jocelyn and desired the best for her. It is reported that Amanda even home-schooled Jocelyn without the knowledge or approval of Castro.

Amanda Berry has heroically expressed a mother’s desire for life, education, and freedom for Jocelyn, despite the loathsome circumstances of her conception – rape. In the beautiful things that Amanda shared with Jocelyn while living tortured in a dungeon, there was much for both of them to rejoice in. No doubt, there will be much more for them to rejoice in tomorrow and in the days and years to come. This is our hope for them, and certainly, we should all find joy in Amanda Berry’s example, which reflects the light of hope for all – not just for a few in a dungeon.