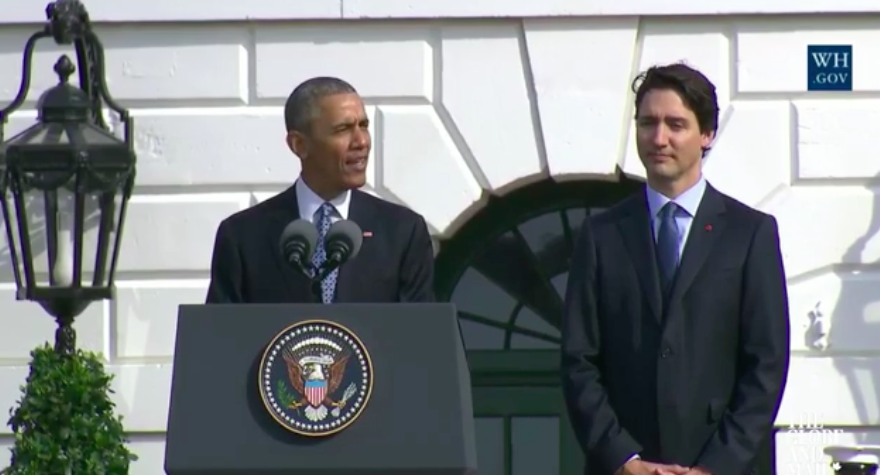 On Thursday morning, Canadian Prime Minister Justin Trudeau visited the White House. While Trudeau was elected just this past October, both he and his father are known for their strong pro-abortion stance.

The United States and Canada are two of only four nations which allow for abortion for any reason up until birth. In Canada, the procedure is paid for with taxpayer dollars, and Parliament couldn’t even pass a motion to simply study when life begins. The Canadian government unfortunately only hopes to expand abortion further – including potentially lifting some training requirements for abortionists.

President Barack Obama also holds extreme pro-abortion views – including opposing an infant born alive protection act that would save the lives of babies who survive botched abortions – so it’s fitting that Obama and Trudeau would get along so well.

While it would have been unsurprising if either leader had touted his pro-abortion beliefs in a speech, the two men stayed away from any comments on abortion. In fact, based on their remarks, one could be forgiven for thinking these politicians were pro-life. For instance, President Obama said:

We’re guided by the same values, including our conviction that the blessings we cherish as free people are not gifts to be taken for granted, but are precious freedoms that have to be defended anew by every generation … As leaders at the United Nations, we stand up for peace and security and the human rights of all people.

There can be no greater “precious freedoms” than the right to life. For how can any other freedom be granted if one doesn’t even have the chance to be born? Obama is right at least in his point about these rights being “defended anew by every generation.” Millennials are a pro-life generation; we support the right to life for all human beings to a greater degree than the generation before us.

There can likewise be no “peace and security and the human rights of all people” if preborn children in America, Canada, and around the world are not protected. Sadly, the United Nations often advocates for pro-abortion policies, as C-FAM notes.

That’s not all the irony to come from Obama, however:

And guided by our values, we can do even more together to advance human development around the world – from saving a child from a preventable disease to giving a student in Africa electricity to study by – because, as Americans and Canadians, we believe in the inherent dignity of every human being.

Those examples are laudable goals, certainly. But how can these children be saved or allowed to study if they aren’t even allowed to be born? How can we “advance human development around the world” when we support the killing of children in their early stages of human development? The transcript notes the line was met with applause. Believing “in the inherent dignity of every human being” should be met with applause.

Hypocrisy, however, should not be.

Both Trudeau and Obama should be asked to put action behind their belief in the dignity of every human being. It’s scientifically undeniable that preborn children are human beings. Thus, believing in their dignity requires us to support that dignity through recognizing their inherent right to life. Perhaps Trudeau and Obama would see exactly how abortion strips away that dignity if they would watch this video with Dr. Anthony Levatino: