Ignore the lies, and look at the record. How does Barack Obama really feel about dismembering children?

Obama has fought to keep abortion legal near birth, during birth, and after birth.

The most common late-term abortion procedure is called the D&E (dilation and evacuation) procedure. In this procedure, forceps are used to remove the fetus piece by piece from the womb. Abortion doctors describe the physical difficulty of performing this procedure:

The procedure changes significantly at 21 weeks because the fetal tissues become much more cohesive and difficult to dismember … scissors may be necessary to decapitate and dismember the fetus. -Dr. Warren Hern

D&E’s, the procedure typically used for later abortions, have always been somewhat problematic because of the toughness and development of the fetal tissues. … I just kept doing D&E’s because that was what I was comfortable with, up until 24 weeks. But they were very tough. Sometimes it was a 45-minute operation. -Dr. Martin Haskell

This procedure is performed while the fetus is still alive.

We would attack the lower part of the lower extremity first, remove, you know, possibly a foot, then the lower leg at the knee and then finally we get to the hip. And typically when the abortion procedure is started we typically know that the fetus is still alive … we can feel it move as we’re making our initial grasps…It’s not unusual at the start of D&E procedures that a limb is acquired first … prior to anything having been done that would have caused the fetal demise. -Dr. Martin Haskell

This is a four-step medical diagram of the procedure (disturbing images):

1) The body parts are grasped at random with a long toothed clamp.

2) The body parts are pulled from the fetal body out the vaginal canal.

3) The remaining body parts are grasped and pulled out.

4) The head is grasped and crushed in order to remove it from the vaginal canal.

As he explains in this video, Obama believes that women have the right to choose this procedure (the “late-term thing”). He does not believe that the government should “meddle in that choice.”

Because of the physical difficulty of the D&E procedure, Dr. Haskell developed a new procedure called the D&X (dilation and extraction), or “partial-birth” abortion procedure. In a D&X abortion, the fetus is simply delivered intact, instead of in pieces. As the doctor delivers the fetus, he tears open the skull with forceps or scissors and evacuates the contents with a suction device.

Though arguably a less painful way to die than the typical D&E procedure, the D&X procedure was banned in the U.S. in 2003.

While in the Illinois State Senate, Obama voted against a state version of the partial-birth abortion ban. While in the U.S. Senate, he publicly denounced Gonzales vs. Carhart (2007), which upheld the federal ban, stating, “I strongly disagree with today’s Supreme Court ruling.”

On rare occasions, a fetus survives an abortion attempt and is born alive. The baby is then discarded and left to die.

After one such incident in Illinois, a bill (SB1082) was proposed which would have prevented doctors from withholding care from babies who are born alive. The bill was amended to contain the following clarifying clause:

Nothing in this section shall be construed to affirm, deny, expand, or contract any legal status or legal right applicable to any member of the species Homo sapiens at any point prior to being born alive as defined in this section.

Nevertheless, Obama led the charge against the bill and successfully defeated it in the Health and Human Services Committee. In a series of blatant lies, he subsequently denied this, but the fact is thoroughly documented. This is a copy of the final vote. DPA means Do Pass as Amended. 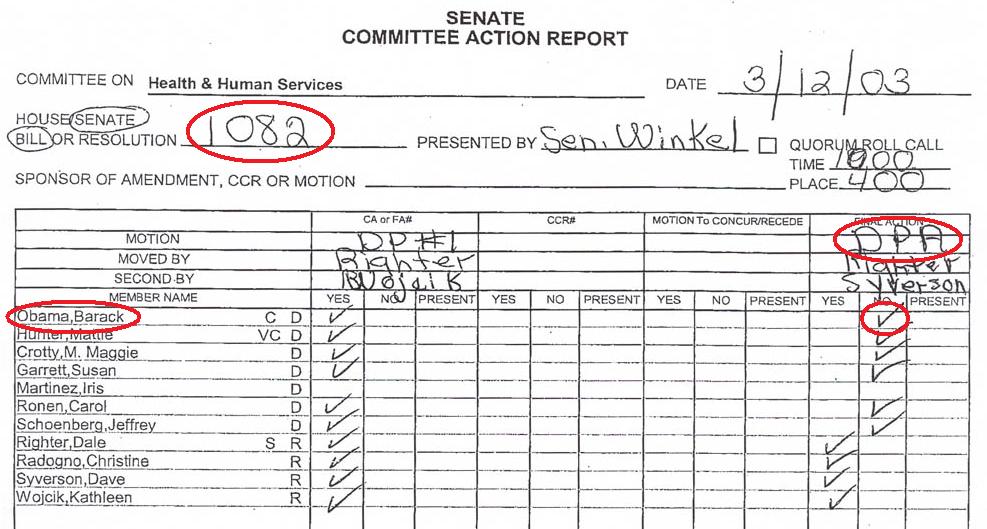