The fetus is expelled wet, red, mucus covered and warm. Limbs are flexed. The head and chin are bent into the chest. The slit like eyes are closed innocently. It is a miniature human being, being awakened from sleep too soon.

In a December 2013 article, I wrote about a nurse who was staunchly pro-choice until she was called upon to assist in abortion procedures. While she did not fully embrace the pro-life cause, she admitted to being extremely disturbed by what she saw. She wrote about her experiences in an essay in the book The Zero People. In the article I wrote for Live Action, I described the nurse’s doubts about her pro-choice position. I would like to revisit her testimony in more detail, and describe the procedures she witnessed.

The abortions she helped with were done by a method seldom used today, in which prostaglandin is given to the woman by IV or by other means. Prostaglandin is a substance that naturally occurs in the body but causes strong contractions when given to a pregnant woman in high doses. The nurse describes what happens after the prostaglandin is administered:

The 2nd trimester abortions are induced by prostaglandins by IV, vaginal suppositories, or most often by intraamniotic deliverance of prostaglandins. Actual labor is induced and the average abortion time is anywhere from 6 to 20 hours but can be longer. The pains are strong rhythmic contractions (just like the labor pains a woman has prior to the birth of a child). The fundus, the firm height of the uterus during pregnancy, moves under the nurse’s hand. The fetus is moving too….

The fetus continues to move, harshly pushed down the birth canal by the strong muscle contractions of the uterine myometrium caused by prostaglandins. The woman remains in bed, unattended much of the time. It is a long wait. Hours pass.

Vital signs and the progress of labor are checked by the nurse at intervals. This nurse is one who is generally used to dealing with the advent of life, not death. She has at one time reassured a tired woman in labor that the tedious process will bring on the birth of a child, not a “termination of unwanted pregnancy”; an unnamed fetus.

Finally the violent contractions of the prostaglandins have done their job. The fetus is expelled wet, red, mucus covered and warm. Limbs are flexed. The head and chin are bent into the chest. The slit like eyes are closed innocently. It is a miniature human being, being awakened from sleep too soon by a woman who was given the choice to interrupt her pregnancy.

The umbilical cord is cut. The fetus is taken away and the woman waits to expel the placenta. In an hour or 2 the entire process is over. She sleeps and then is discharged if there are no complications. She goes home. But I wonder if she realizes just how much he has left behind.

These abortions were usually performed between 16 and 20 weeks. By this time, unborn babies are fully formed. They can hear and react to loud noises. They can also taste, and experiments have been done showing that unborn babies swallow more amniotic fluid when it is sweetened and less when it is made bitter.

Today, abortions between 16 and 20 weeks are usually done by tearing the baby apart in utero in a process known as D&E. 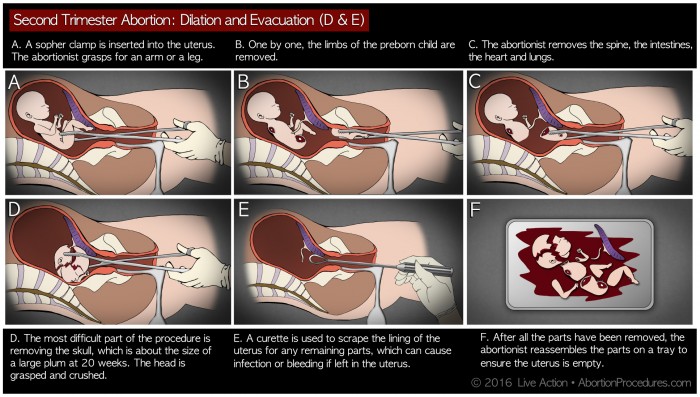 Forceps are used to grasp parts of the baby and pull them out of the uterus. This results in ripping off the child’s arms and legs. Then the rest of the child is removed, piece by piece. The last stage of a D&E is the crushing of the baby’s skull with forceps. You can read a description of this procedure by a former abortionist here. And see the results of one of these abortions at 18 weeks here. (Warning: this is graphic.)

However abortions are done at this stage, they result in the poisoned or torn apart body of a recognizable unborn child. Of course, abortion is always wrong, whether the child is fully formed or not. Science documents the fact that life begins at conception, and any deliberate interruption of this life is killing a human being.

But the reality of fully formed babies being violently killed has the power to move people in ways that earlier abortions cannot. Pro-lifers need to continue teaching that life begins at conception, and defending the rights of all babies in the womb, regardless of age – but highlighting these cases, where developed babies are killed, can break through the complacency of many people who are nominally pro-life (but not involved in the movement) or who are undecided about abortion, and result in more support for the pro-life movement. In this case, a nurse who was strongly pro-choice was swayed by seeing firsthand the undeniable evidence that abortion kills a baby.

You can read the complete testimony here.