New York’s governor wants to be sure late-term abortion is widely available – despite the fact that his state already houses the abortion capital of the nation, New York City, infamous for having an abortion rate of 40 percent. Today, Gov. Cuomo released an abortion rights bill that would decriminalize abortions in New York  after 24 weeks.

According to CBS News:

At a press conference Tuesday, Cuomo said he wants to “codify” a woman’s right to an abortion under special circumstances so that state law is aligned with federal law. 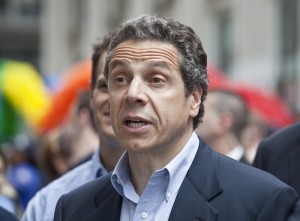 It’s fear-mongering. There is a simplicity and a clarity to the ‘choice’ language. You’re pro-choice or you are not pro-choice.

Besides the obvious problem pro-lifers would have with this bill, other troubling aspects exist.

As Business Week reports, New York State is largely pro-choice, and Republican legislators may find themselves booted out of office come November if they reject the bill:

If Cuomo can persuade lawmakers to vote on the bill, he would force Republicans to take an antiabortion stance in a state where most of their voters – led by suburban women – favor abortion rights, said Bruce Gyory, who teaches politics at the State University of New York at Albany.

A spokesperson for the governor actually says this is a litmus test for the parties, according to Cuomo spokesman Richard Azzopardi:

The bill will include a real litmus test on Roe v. Wade for members of both parties, making it impossible to vote against for anyone who wants to say they support a woman’s right to choose.

Cuomo is coming under fire from pro-life groups because he is a proclaimed Catholic who is pushing late-term abortion rights. Many groups publicly commented that they believe that this is more a political move for a future presidential bid than a move to actually protect women, but Cuomo insists that his only motive is to secure the rights of women in his state, saying New York has not adequately protected women’s rights with its laws.

His assertions that abortion needs to be protected at all in a state with such high abortion rates is remarkable. In the largest city in the state, New York City, the abortion rate is about 40%, and this statistic hasn’t changed too much. This is about twice the national abortion average.

As Live Action News reporter Cassy Fiano reported recently, the New York City Department of Health launched an app for teenagers where they can download information which includes where to get an abortion in the city. Instead of trying to reduce this shockingly high rate, there are moves to help it grow.

It seems the governor of a state which is actually infamous for killing two of every five babies would be more concerned with programs which would actually protect a woman’s right to be able to birth a child, find help to go through the process, and find assistance if she chooses to keep her child or adoption help if she chooses to let another family raise the child. A governor who wants to serve his state shouldn’t be looking for ways to expand and protect killing; rather, he should be looking at the astounding number of abortions already happening and be looking at ways to reduce it.

Most people who are pro-choice say they want to reduce abortion. But Cuomo, who says this bill forces people to answer the question “are you pro-choice or are you not?,” seems to think being pro-choice means wanting expanded abort coverage no matter how late in the term the mother is. Cuomo’s self-appointed litmus test makes the definition of being pro-choice being pro-later-term abortion.

Bordering New York is the state of Pennsylvania, where Kermit Gosnell killed babies after 24 weeks, as Cuomo wants New York to do. The timing of Cuomo’s bill is horrendously insensitive. As Americas are seeing the perils of late-term abortion through the Gosnell crimes, horrifying even pro-choicers, the leader of a bordering states announces his plan to allow the same thing to potentially happen in his state – because apparently being home to the nation’s highest abortion rate isn’t quite enough infamy for Cuomo. He wants to make sure that abortion can stay legal and expand more.

New York legislators end their session in late June, so this bill could come to a vote soon.