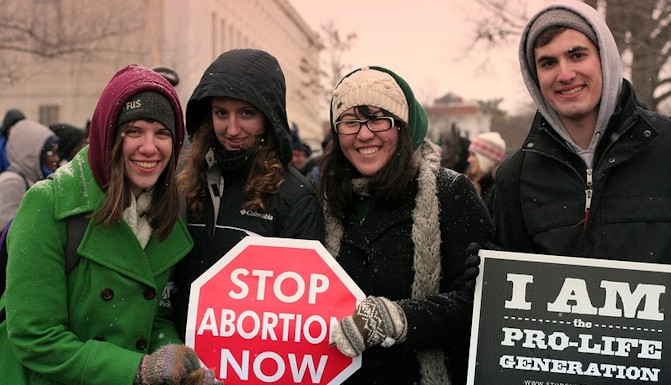 People on both sides of the abortion debate had much to talk about when Republicans introduced a bill that would ban abortion after 20 weeks of pregnancy.

NARAL lobbied hard against it, and though the bill easily passed the House before and is supported by a majority of Americans, Obama promised to veto it. The bill was tabled due to debate over the rape exception, which is unfortunate for apparently both pro-lifers and pro-abortion advocates alike. A new poll shows that a whopping 84% of Americans want to ban abortion after the first trimester, and that includes 7 out of 10 who consider themselves “pro-choice.”

Eighty-four percent of Americans want significant restrictions on abortion, and would limit it to, at most, the first three months of pregnancy. This includes almost 7 in 10 (69 percent) who identify themselves as “pro-choice.”

The same percentage (84 percent) also says that laws can protect both the well-being of a woman and the life of the unborn.

In addition, by more than 20 points (60 percent to 38 percent), Americans say abortion is morally wrong.

Other key findings of the survey include:
• 64 percent say the nation’s abortion rate is higher than it should be. Only 7 percent thinks it is too low.
• 78 percent support parental notification before a minor can obtain an abortion.
• 68 percent oppose taxpayer funding of abortion, while only 28 percent support it.
• By nearly three to one, Americans see abortion as doing a woman more harm than good in the long run (59 percent to 22 percent).
• By 20 points (57 percent to 37 percent), Americans support proposed legislation that would permit medical professionals and organizations to refuse to provide abortions or refer patients for abortions.

Republicans say that they plan on voting on the 20-week abortion ban later in the session, and this polling should serve as yet another motivation for them to do so. Americans do not support abortion; polling has repeatedly shown this to be true. And they especially do not like late-term abortion.

There are only a small handful of countries that allow late-term abortion, and permitting such a barbaric practice to continue in the United States despite scientific evidence showing that unborn babies can feel pain in the womb, and repeated polling showing that a large majority of Americans — including a large majority of women — want it banned makes no sense.

The people who do want late-term abortion are the extremists, the ones calling for free abortions, on demand and without apology. They are in the minority, yet their voices also tend to be the loudest.

It’s time for politicians to stop listening to the vocal minority and pandering to the pro-abortion extremists, who are so very out of touch with what the rest of Americans want, and to start listening to what Americans are actually saying about abortion.