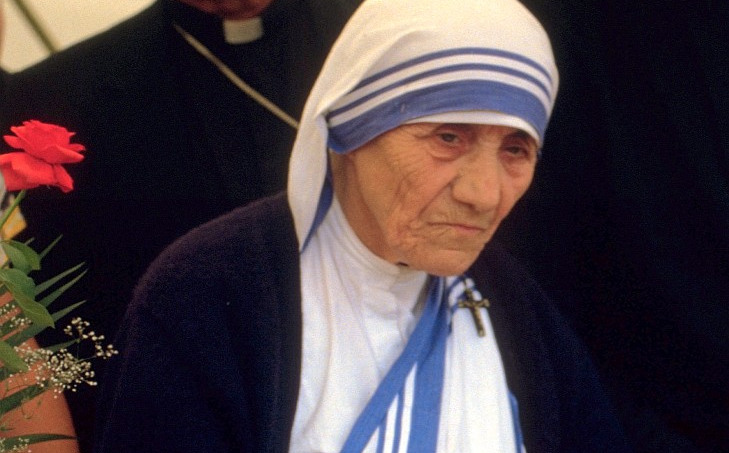 Blessed Teresa of Calcutta, known as Mother Teresa, was famous for her work with the “undesirables” of society: the poor, the lepers, the dying.

But Mother Teresa wasn’t just known for her work with the poorest of the poor. She was also an outspoken opponent of abortion, and never backed away from speaking the truth about the need to protect all life, even when it was before a pro-abortion audience. The most notable example was when she stood before the radically pro-abortion Bill and Hillary Clinton at the 1994 National Prayer Breakfast, and called abortion “the greatest destroyer of peace today.”

Blessed Teresa was truly a courageous defender of life. And in honor of her canonization, here are 10 quotes on abortion and being pro-life.

“That special power of loving that belongs to a woman is seen most clearly when she becomes a mother. Motherhood is the gift of God to women. How grateful we must be to God for this wonderful gift that brings such joy to the whole world, women and men alike! Yet we can destroy this gift of motherhood, especially by the evil of abortion, but also be thinking that other things like jobs or positions are more important than loving, than giving oneself to others. No job, no plans, no possessions, no idea of ‘freedom’ can take the place of love. So anything that destroys God’s gift of motherhood destroys His most precious gift to women — the ability to love as a woman.”

“But I feel that the greatest destroyer of peace today is abortion, because it is a war against the child, a direct killing of the innocent child, murder by the mother herself. And if we accept that a mother can kill even her own child, how can we tell other people not to kill one another?”

“Please don’t kill the child. I want the child. Please give me the child. I am willing to accept any child who would be aborted and to give that child to a married couple who will love the child and be loved by the child.”

“By abortion, the mother does not learn to love, but kills even her own child to solve her problems. And, by abortion, that father is told that he does not have to take any responsibility at all for the child he has brought into the world. The father is likely to put other women into the same trouble. So abortion just leads to more abortion. Any country that accepts abortion is not teaching its people to love, but to use any violence to get what they want. This is why the greatest destroyer of love and peace is abortion.”

“The child is God’s gift to the family. Each child is created in the special image and likeness of God for greater things – to love and be loved.”

“Life is the most beautiful gift of God.”

“Many people are very, very concerned with the children of India, with the children of Africa where quite a few die of hunger, and so on. Many people are also concerned about all the violence in this great country of the United States. These concerns are very good. But often these same people are not concerned with the millions who are being killed by the deliberate decision of their own mothers. And this is what is the greatest destroyer of peace today — abortion which brings people to such blindness.”

Mother Teresa founded the Missionaries of Charity, which now boasts thousands of sisters working in over 100 countries. The sisters run hospices for people dying of illnesses like HIV/AIDS and leprosy, soup kitchens for the poor and the homeless, mobile health clinics, orphanages, and schools.

After two miracles were credited to her intercession, the Vatican began preparing for her canonization, which took place just a day short of the 19-year anniversary of her death.