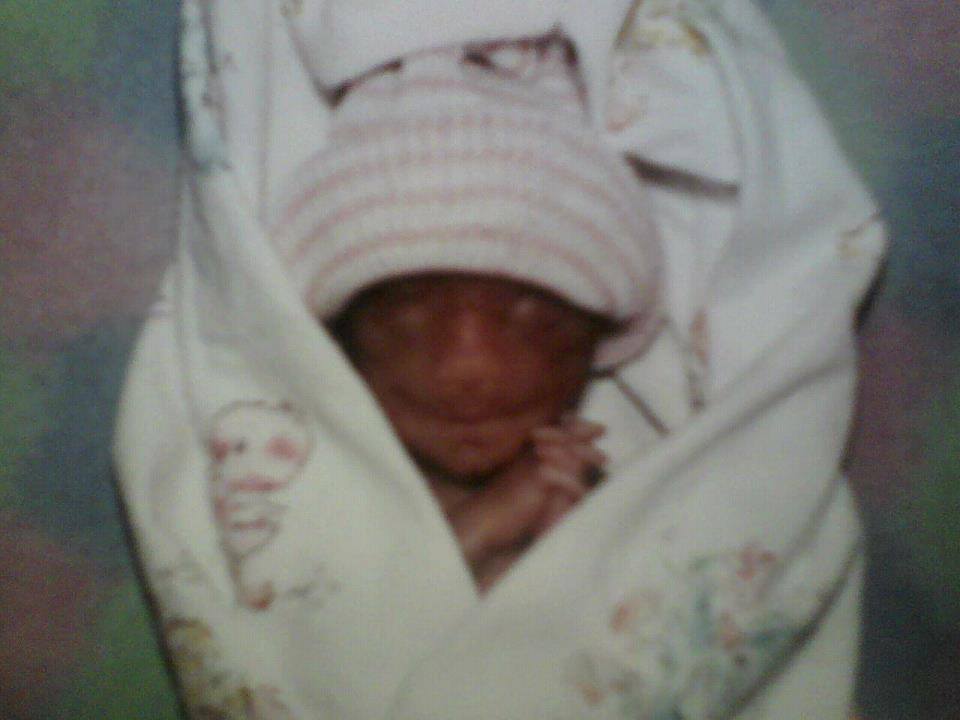 A woman named Anna C. shared this heartbreaking picture of her baby, who was aborted at 24 weeks.

Anna spoke to me about her past experiences, but originally shared her story on social media…

Her name is May Lynn and she has a story. She was my daughter, murdered by me via abortion at 24 weeks. In light of these Planned Parenthood videos I want to share her story.

Hardly anyone knew and the few people that did, I lied to, never admitting that her blood was on my hands. I couldn’t even admit it to the hospital staff. I told everyone (only a handful of people) it was just a crazy misfortune.

It hit me the hardest when I woke up in the hospital bed with her in my arms and she was warm from my own body heat and for a moment I could pretend that I hadn’t done what I had done…. until I couldn’t pretend any more.

It hit me again when I called and begged the funeral home to unseal her casket so I could hold her one last time. Those precious, tiny fingers. That soft skin and tiny little mouth. Every time I hold my other children… but never her….

It hits me every time I think about it and wonder what kind of little girl she would have been. Or think how she’d be getting her license to drive about now… Anna had two other abortions before the death of May Lynn. Her first abortion was coerced by her mother:

The reason I had my first abortion was because my mother insisted. She couldn’t have me embarrassing her again, I was 16 and already had a child.

One study shows that up to 64% of women who abort feel they are being coerced by another person.

For teenagers, this coercion often comes from their parents. Coercion also can come from the father of the pre-born baby. In fact, many women have been subjected to violence and even murder  by their partners or ex-partners when they refused to abort.

For Anna, fear and shame were factors in her second and third abortions:

The second time I went on my own, but [was] driven by the same feelings. I didn’t want to embarrass my mother, I’d already had a second child at 17. I was 18. I was also in a bad relationship and couldn’t imagine having another tie to that person. The final time, I was embarrassed again. It was only months later and I didn’t know for sure who the father was… although I suspected a married man… and even more embarrassing (for my family, not me) he was a black man. I was desperate every time.

None of the fathers had any say in the decision. In fact, none of them knew their babies were being aborted.  Only one was told, after the fact.  Anna describes him as “heartbroken.”

Anna explains how the clinic workers were eager to facilitate her abortions. They talked her into the abortions despite her doubts:

The people in the clinics were always so encouraging, so accomodating, [sic] I can see now how they played into my emotions.

I remember resisting… having second thoughts. They pushed so hard against that. Told me how brave I was, how it was best, how I couldn’t even take care of the children I already had and how I didn’t want to keep burdening people… they were just so happy to help me out of my “predicament.”

For her last abortion, Anna was given tablets at the abortion clinic to take to induce labor. She was supposed to return to the clinic to “give birth” to her dead baby. But she never returned to the clinic. She was still hiding her pregnancy from her mother and was unable to “sneak away.” She went into labor at home. She explains:

[I] labored at home, called an ambulance (my mother thought maybe my appendix had burst or something, I still hadn’t told her what was going on) and I delivered in the ambulance. When she met me at the hospital later and I had to tell her that I’d just had a baby I still pretended that I was just as surprised as she was… I said I had no idea I had been pregnant. The hospital has a special photographer that does pictures for stillborn babies and they gave me the pictures.

Had Anna had May Lynn at the abortion clinic, the child’s body would’ve been carted away and disposed of. It may have been dissected for organs to sell. The remains would most likely have been burned with medical waste or simply thrown out.

But since she gave birth in a hospital, the baby was photographed and mourned. The child that would’ve been nothing but medical waste in the clinic was given the utmost respect at the hospital.

Anna struggled for many years with extreme grief and guilt. Eventually, though, she began to find healing:

May Lynn was one victim of abortion. Indirectly, Anna was another. The clinic workers preyed on her fears and encouraged her to abort. She was not given fair and unbiased counseling or any encouragement. No one tried to help her find nonlethal solutions to her problems.

Had she gone to a  crisis pregnancy center, they would’ve soothed her fears and given her encouragement to have her child. They would have provided her with information on fetal development and the facts about abortion. Many crisis pregnancy centers will help a young girl tell her parents and other important people in her life that she is pregnant. Unfortunately, Anna ended up  in abortion clinics, which had financial motives for encouraging her to abort.

Anna hopes that the heartbreaking pictures of her daughter May Lynn will change minds and hearts about the abortion issue. She hopes that women who are considering abortion will reconsider after seeing the May Lynn,  that they will realize that all babies have value.

Anna was brave to share her story. Pro-lifers must always embrace women who have had abortions and regret them. Judging such women only adds to their pain, not to mention the perception that pro-lifers only care about babies and not the women who carry them. The pro-life movement is a movement of love which seeks to heal the emotional pain abortion causes as well as advocate for the lives of pre-born babies. Only by understanding the pressures that drive women to abort can pro-lifers prevent these abortions from happening.

The pro-life movement is, at its best, a movement that embraces both the woman and the child.