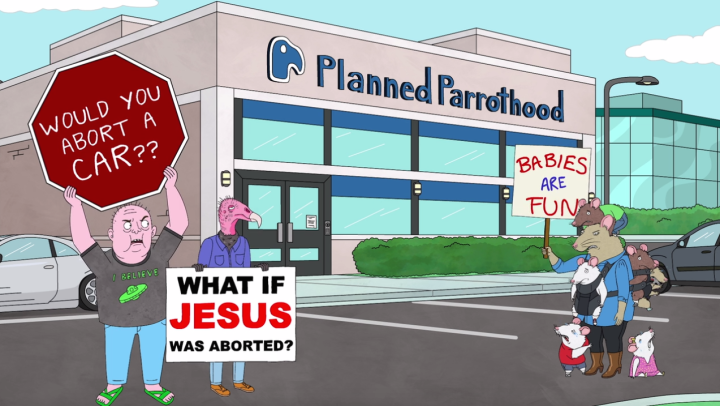 “Bojack Horseman” is an animated Netflix series where humans and anthropomorphic animals live side-by-side. A recent episode tackled the issue of abortion; but rather than treat the subject thoughtfully and with nuance, the show instead went straight for offensive and horrifying.

Titled “Brrap Brrap Pew Pew”, the episode has a human character named Diane who has become pregnant by her spouse, who is a dog. They decide to get an abortion, and head to “Planned Parrothood.”

When Diane goes to Planned Parrothood, there are protesters outside waving rude and graphic signs. The episode then pokes fun at pro-life laws, with the abortionist telling Diane that, by law, she has to listen to the heartbeat, and that he is required to tell her that, “at one month, your puppies have a favorite color, and that color may be blue.”

When she protests, saying that can’t be true, he shrugs it off, saying that “it’s the law.” He then tells her that before she can have the abortion, she will be forced to watch “20 hours of cute puppy videos as Sarah McLachlan’s ‘I Will Remember You’ plays softly.”

This leads to a news program on MSNBSea where a panel of old men discuss abortions. Diane ultimately goes through with her abortion, with the full support of her husband.

Rather than being disgusted or horrified by the episode, the media have enthusiastically applauded it.

… The current state of abortion discussions in media coverage and in popular entertainment ultimately serves to reinforce misinformation by shrouding the topic in confusion and secrecy. BoJack Horseman’s rare approach to highlighting the realities women experience when choosing to undergo the common medical procedure — and the persistent stigma media perpetuate about the decision — takes an important step in shifting the discussion.

Variety called the episode “whackadoodle and hilarious”, even applauding the terrible song sung by Sextina Aquafina:

Instead of “Brrap Brrap Pew Pew” existing in a world not our own, it feels more that the episode starts in our own world, and ends up somewhere fantastical. A world where shame is not mandated and abortion can be taken for granted, with guns-a-blazin’. In that environment, three of the female characters end up having a conversation about choice that is noticeably without stigma, even though all three are making very different decisions. “Get Dat Fetus, Kill Dat Fetus” is, undoubtedly, superficial, provocative showboating. But “BoJack Horseman” makes a case for its politics, too.

Mic.com cheered on the show for showing a woman who had an abortion and didn’t regret it.

… The show’s casual, regret-free attitude toward the reproductive rights debate is refreshing, but BoJack also doesn’t forego nuance in order to make a point. Abortion is an issue that stirs up complicated emotions in people, women in particular. Nowhere is that more evident than in the conversation between Diane and Princess Carolyn, a career-driven woman in her 40s.

The A.V. Club called the episode “bold, nuanced, and funny”:

… If you’re going to start a conversation about a hot-button issue, you might as well set that button on fire before anyone gets a chance to push it and have the conversation on your terms. And it also helps that the song is hilariously catchy, leading to a memorable war of sound effects in Sextina’s limo.

Unsurprisingly, the show got a rave review from Jezebel:

All of these notions coalesce when Diane and Mr. Peanutbutter, who is a good dog and agrees loyally with everything she says, are at the abortion clinic. Complaining that Princess Carolyn only complains about her company’s bottom line instead of the “very real damage” that Sextina’s “Get Dat Fetus, Kill Dat Fetus” could do to its audience, Diane is confronted with a teen girl in the waiting room who is starstruck when she hears Sextina’s name. Diane asks the girl if she’s offended when Sextina sings, “I hope and pray to god my little fetus has a soul / Because I want it to feel pain when I eject it from my hole.”

In an interview with Buzzfeed, the writer of the show, Joanna Calo, explained that she wanted to tap into pro-lifers’ worst fears… and yet, laughed when a pro-life review accurately described the episode.

“Is it about sex? Is it about violence? Is it about women that are out of control? That was supposed to be the vibe of the song,” Calo told Buzzfeed.

When they told her that a “right-wing” site described the show as something that “grotesquely and callously advocates for unapologetic abortion on-demand while bashing pro-lifers”, Calo laughed, and claimed they were just excited to show a different perspective, even though she had just admitted to Buzzfeed that she intentionally tried to tap into pro-lifers’ worst fears.

She then explained that she hoped to destroy the stigma surrounding abortion through the episode, so that women wouldn’t have to feel badly about going through with it:

“I love the idea that someone who is going through something like this, thinking about getting an abortion in a town where it’s hard to get … or in a family where that’s not something they’re supposed to talk about, that it might make them realize that there are other people that feel differently,” she said. “If we can joke about sadness and joke about loneliness and joke about making mistakes over and over again, then maybe it’s OK. We can remove one way of feeling bad about it.”

Time and time again, pro-abortion activists seem to feel that they can erase the stigma surrounding abortion by being as offensive, disgusting, and in-your-face as possible about it. They don’t seem to realize that, as most Americans find abortion to be morally wrong, this tactic will only blow up in their faces.

It’s not a joke, and it’s not just another minor medical procedure. It’s something that takes a life. And being intentionally crude, shocking, and distasteful will only serve to further convince people that the pro-abortion lobby is filled with extremists who will promote it at any cost.