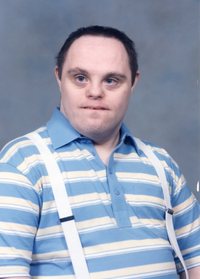 Editor’s Note: The following tribute was shared with Live Action by Eddie’s cousin. She writes, “He was 61 years old and was born with Down syndrome. His younger sister Debbie wrote and shared a wonderful tribute about her brother Eddie for his memorial service. It is her thoughts on how much Eddie taught all of us throughout his life. … It is so beautiful that others need to read it.”

When my brother, Edward Vincent Ebenhoeh, was born on August 20th, 1952, there were no prenatal ultrasounds and blood tests like there are now to confirm Down Syndrome, but my Mom knew in her heart when she first saw him, but it never mattered to her.

On the day of discharge the doctor gave my dad a list of facilities and addresses. When Dad asked, “What’s this?” the  doctor told him these were places that Dad could take Eddie to to live. My dad replied, “He is our son, and we will take him home and raise him!” And raise him they did!

They taught him what they could. It took him longer than most kids to learn to crawl, to learn to walk – but he did! They taught him like any other child – good manners, how to wash his hands, his boundaries outside, and how to cut his food, which, by the way he was not too pleased about at first! And the list goes on and on. But what we never expected was what Ed would continue to teach us.

After Mom amd Dad were both gone, Ed went to live with my sister Kathy and her husband Mark who continued the job of raising Ed, keeping him safe, and healthy, and helping with anything he needed. Their family also lovingly welcomed him, and helped out however they could, right down to the youngest grandchildren helping out by doing such things as picking up his stick when he dropped it and giving it back to him! As time went on, his health started to decline. He started to slow down, not walk as much, and sleep more.

The doctor said aging is faster for Down’s people than it is for the rest of us and that he was more like a man in his 90’s. Kathy would joke with him that he was older than her now! He started to have more seizures that seemed to shut down slowly the few abilities that he did have. When he lost the ability to walk, we knew we had a problem, since it made it increasingly more difficult to care for him.

We had a family discussion in Kathy’s living room to talk about what to do. Do we try to devise a schedule where more family members can be there to help at different times? Or would he qualify for outside help to come in the home to help? Do we move him to a nursing home or an assisted living home to live? We ended the meeting with a family prayer – asking for guidance on what steps to take.

As we prayed out loud and took turns around the room saying what was in our hearts, I opened up my eyes and peeked – what I saw will always be with me – Ed was in his chair looking up towards a corner of the room..he then extended his arms upward with the prettiest smile on his face. I nudged Mark so he could see it too. I shared this after the prayer was done, and I knew no matter what, he would be OK, I know that he saw Jesus, or angels, or maybe Mom and Dad, too! God was saying Ed will be OK. That He has always been with him and that He would always stay with him.

Throughout the next few weeks, visiting nursing homes, and during the meetings with “officials,” I knew God was with us throughout every step as everything fell into place quickly and smoothly. He chose the best home, and the best care-staff and helped us make the best decisions. Ed seemed to settle in fine without any nervousness or fright. It was not easy for us to move him there, especially Kathy who felt like she was losing part of herself. And again, God’s work was revealed when Kathy was in the hospital for her surgery a short time later and admitted into a room with the exact same room number and bed number as Ed’s. God’s message of, “I am with you both” gave her great comfort.

Some of the nurses felt a special bond with Eddie – they immediately were taken in by his more childlike ways and loving demeanor and took extra steps to care for him and to spend time with him which we could not be more thankful for. One particular nurse who was there on his first day told us some time later, that she had been going through a difficult time in her life when Eddie came to stay, and he always made her feel better with his smile, and she looked forward to seeing him when she came to work. She said she realized that things such as holding grudges and checking our cell phones and hurrying everywhere really don’t matter at all compared to living in the moment like Eddie did.

It was fitting that she was also there on his last day to help care for him. Although his health continued to decline to the point he did not walk at all, he became more still, he slept more, one thing continued to stay – his  beautiful smile!! The nurses always commented that no matter how sick he was, or how bad he must have felt, he always would give them a smile!

I started to realize a few years back, that, yes, God gave him to our family to raise, and to teach things to, but I feel he taught us so much more. So often while I was growing up and later while we were raising our kids, I had seen Ed get upset – as a kid, if I moved one of his lined up army guys which he did not like anyone to do, or Mom or Dad would tell him he had enough to eat and couldn’t have anymore, or that he needed to leave Peggy alone while
she was baking cookies. Yes, you knew he was mad at you…but it was only for a few seconds, then he would look at you…and smile and give you a hug! He was always very quick to forgive. And isn’t Forgiveness one of God’s greatest lessons?

And Ed had a beautiful laugh…his laughter would fill the room and he would laugh often- quite often at Ashley throughout her life that sometimes it would make her ask, “Why is he laughing at me so much?” But he laughed hard at such simple things…cartoons, somebody dropping something and having to pick it up, funny faces the kids made pictures, or just even funny noises! Isn’t this also what God wants…for us to be filled with joy? I also noticed it seemed like he sensed the children’s personalities and acted accordingly. The ones with the more gentler spirits helped him or hugged him, and he would respond more with a simple nod or with a smile, or a gentle pat on the back. The more robust personalities, would get a big knee-slapping laugh or just a little harder pat on the back! And again, another of God’s lessons is displayed – love one another.

When we were agonizing over the decision to move him to the nursing home, I remember saying to Mark, “Why doesn’t God just take him so he doesn’t have to go through this?” Well, I realized why on his last day – Eddie still had more of God’s work to do and lives to touch because there was not a dry eye to be seen as throughout Ed’s last day many workers came in to say goodbye and to tell us how much they would miss Eddie. And the final lesson – trust in God.

Yes..I feel he taught us and gave us so much more than we could ever do for him. So…as I look out at all of you…our family….I see much love….and I want you to think about how you want to live your lives, and think about how Ed lived his life. Ed may have had many physical limitations,no formal education, no college degrees – but he taught us how to live, how to laugh, and how to love.

So the next time you are flipping through the TV channels and come across an old Three Stooges show or a SpongeBob cartoon – take a few moments to enjoy it and laugh and remember Eddie! I don’t think Jesus would mind if we borrowed a quotation aimed at Him and switched it to Ed..when we are questioning our life, ask ourselves what would Eddie do?

Editor’s Note: To read some of our previous Life of the Week features, go here: