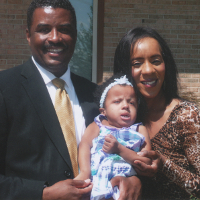 Bernadette and Philip Smith were the proud parents of seven children – Philip Jr., Delores, Soma, Titus, Isaac, Israel, and Eden – when they were blessed to learn they would soon welcome an eighth child. But by the fourth month of the pregnancy, during a routine ultrasound, doctors learned there was a problem with the baby. The Smiths were told that their child had Trisomy 18, or Edward’s syndrome.

“They told me that she was fatal,” explains Bernadette, “and that she wasn’t going to make it.”

Trisomy 18 is considered to be incompatible life with life. It is caused by an extra copy of the number 18 chromosome and according to the National Institutes of Health, only half of unborn babies with Trisomy 18 survive labor and delivery. Those who do survive usually have birth defects and are given a poor prognosis. Less than 10% will live to see their first birthday.

Even with the odds stacked against their daughter, Bernadette and Philip had no intentions of ending the pregnancy. However, when Bernadette was six months along, doctors again pressured her to abort, this time using her other children as an excuse. Doctors told her that she did not have the time to be lying in the hospital with a high-risk pregnancy and delivery when she had seven other children to take care of. Still, Bernadette and Philip remained strong in their commitment to fight for their daughter’s life.

[The doctor] told my husband, ‘Well your wife, she has a choice to make,’ and my husband said, ‘We will not abort his child.’ He turned away from my husband and told me, ‘You have a choice to make.’ He totally ignored my husband. I said that I wanted to fight for her life and he told me he was there if I changed my mind. They had admitting papers for me because they really thought I would abort. It was strong. The pressure was very strong. The heart doctors – one in particular – he swung back in his chair and told me she wasn’t going to make it, that we were not taking her home.

Nevertheless, Bernadette, strong in her convictions, held onto her faith and told the doctor that she didn’t deny his knowledge or what he saw on the ultrasounds, but that she believed in the healing power of God. She knew in her heart that everything would be alright.

Bernadette’s and Phillip’s baby girl – whom they named Hannah – made it to full term, but she was delivered via an emergency C-section. Frightened they would take her daughter away from her, Bernadette refused to let the doctors put her under for the surgery. She remained awake, feeling the pain of each cut. During this time she heard a voice. It told her, “Come up, My child. Come up with Me. I sit in the heavens and laugh at the puny threats of the enemy.” Bernadette began to laugh and soon everyone in the room was laughing too. The tension was gone. And Hannah was about to shock everyone.

She had survived a pregnancy that doctors were sure she wouldn’t. Now Hannah was born, but she wasn’t breathing.  Thankfully, doctors were able to get her breathing started. However, due to holes in her heart, Hannah was immediately taken to a different hospital. At this hospital, she was placed on a feeding tube. Meanwhile, Bernadette fought to be released from her hospital so she could go and be with her daughter. Once by Hannah’s side, Bernadette felt strongly that Hannah did not need the feeding tube and had it removed. From then on Hannah was able to survive and thrive on breast milk. Even more amazing, within three months the holes in Hannah’s heart had closed up.

I held onto faith and the Word of God. It saved Hannah. I just kept believing the Lord’s Word. Three months later the doctor could not believe it. The holes were closing and the doctor threw his head down because he was in shock. They told me she was blind. I said, ‘No she’s not. She can see.’ I took her back to the eye doctor after years of the doctor saying she was blind and the eye doctor said to me, ‘This girl can see. Let’s get her some glasses.’ There was just so much warfare, but she triumphed over everything. God just brought her through so much.

After four years of life with her family, Hannah came down with pneumonia. Although she was thought to be healed of it, Hannah died. Her family was devastated, but grateful for the years they had together.

I can’t imagine them aborting her at 4 months, at 6 months. She’s with the Lord now. It was a journey. Five beautiful years with her. I just want to tell mothers, ‘Don’t do this [abortion].’ I had to fight through it all. I wanted my baby alive and I wanted to carry her. We would have missed out on all of the beauty of life with my daughter. The voices of everyone screaming in my ear that it’s not about you, Mrs. Smith. I said, ‘I know, it’s about her and I want her to live.’ The children loved her. All seven of them. They were grief-stricken when she died. Even today they talk about her and they cry and want to go to her grave. They’re still remembering her. Hannah was Hannah. She brought so much joy to us. We miss her dearly. I want to encourage everyone. Go full term. Go the course. Don’t abort. Don’t do it.