To believe the media these days is to believe that Planned Parenthood is the oppressed rather than the oppressor that it is. While the abortion giant is making a Goliath about the birth-control issue, the truth about what’s really happening behind closed doors is that Planned Parenthood will stop at nothing to promote its sexual agenda, even oppressing minors and exposing them to pornography, sex trafficking, and sexual abuse.

Yesterday Live Action released a new video showing a Planned Parenthood worker in Colorado, advising an underage girl on how to perform sex acts, find pornography, and hide it from her parents. Exacerbating the tragedy of this video is that it’s not an isolated incident but the latest in a string of undercover videos from Planned Parenthoods across the nation, showing that its primary role isn’t “women’s health” as it purports so much people sometimes believe it without question; instead, its primary role is sex at all costs, with abortion-on-demand as a result.

The video was profoundly disturbing. A worker at the Planned Parenthood, the same one that also recently won an award for increasing its abortions over the last year, tells a teenager that she should read Fifty Shades of Grey together with her boyfriend and decide what they want to do together, such as “whipping” and “asphyxiation.” The video causes an average person to do a double take; surely that woman did not just tell a teenager to participate in whipping and choking as a normal part of sex! But she did. Over and over. Whipping as part of sex may bring “pleasure,” she says to the minor, telling her to read through the pornographic book with her boyfriend and decide what they feel comfortable with trying. She adds other astounding pieces of advice:

“Some guys like women to urinate on them—and it can be really fun.”

“You can gag them, whip them…”

And then in a stunning reminder of the oppressive nature of Planned Parenthood, we learn that no may actually mean yes.

She tells the girl to have a “safe word” in these extreme sexual acts, so that if the whipping turns bad or the choking starts to actually choke a victim (because they are victims; this is victimization, no matter what Planned Parenthood labels it to promote their sexual business) there is a way to stop it. The girl asks if the code word for stopping can be stop. Planned Parenthood tells her no: 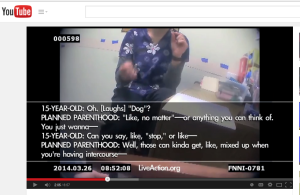 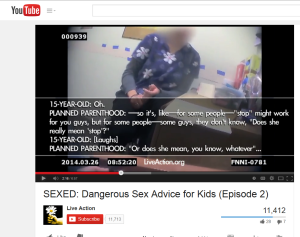 Planned Parenthood’s continual disregard for the integrity of women has manipulated a culture into believing that the only thing abnormal is not participating in any sexual act or abortion. The abortion pioneer is oppressing women, not caring for their health. No teenage girl is ready for the emotional and physical abuse this worker advises. Mimicking abuse and calling it consensual doesn’t make it not abuse; it makes it oppressive and manipulative–and abusive.

Today’s video, combined with the string of offenses from Planned Parenthood lately must open our eyes to realize that regardless of what one views as right or wrong with birth control, the issue with Planned Parenthood is not birth-control. When an organization receives over $540 million in government funding, and yet uses its funds to counsel a teenager to return to her abuser, cover up sex trafficking, or participate in whipping and choking a sex partner, among other things, the reality shows that the same government that gives the organization its millions of dollars is also looking the other way at unethical, immoral, and, ultimately, illegal acts. That makes not only Planned Parenthood an oppressor, but the agencies and nation that funds it a part of the oppression.

To learn more on how to fight this, please visit Planned Parenthood Exposed. There you will find a host of disturbing undercover videos, as well as a petition you can sign to help protect women’s health—for real this time.