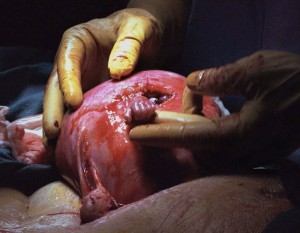 Baby Samuel was captured in this famous photo from 1999 during a successful surgery treating spina bifida while still in the womb. (Photo credit: Michael Clancy)

On February 21, twin girls Anna and Ella were born in Virginia. Two and a half months prior to their birth, the girls’ parents learned that they had twin-to-twin transfusion syndrome, or TTTS. According to the TTTS Foundation, the syndrome is a disease of the placenta, an organ formed primarily by and for the babies. As a disease of the placenta, it affects only identical twins who share the same diseased monochorionic placenta.

“The shared placenta contains abnormal blood vessels, which connect the umbilical cords and circulations of the twins,” according to the TTTS Foundation. The Foundation explains that “the common placenta may also be shared unequally by the twins, and one twin may have a share too small to provide the necessary nutrients to grow normally or even survive.” The twins’ mom, Crystal, initially felt that the placenta disease was her fault, but the Foundation states that TTTS “is not hereditary or genetic, nor is it caused by anything the parents did or did not do. TTTS can happen to anyone.”

When Crystal was informed of her babies’ condition, she immediately went to a maternal-fetal specialist, Dr. Jena Miller, who suggested that the best option for the babies would be operate right away. The procedure to correct the imbalanced sharing of blood between the girls involved separating the blood vessels in the placenta. The operation is a laser procedure, and is performed in utero.

Thanks to the advanced technology which allowed doctors to treat the girls’ condition while they were still in the womb – rather than having to wait until after they were born (if they survived the pregnancy) – the girls were born healthy a few weeks later. Anna weighed 5 lbs, 7 oz, and Ella weighed 4 lbs, 7 oz. They were able to go home with Mommy and Daddy a couple of weeks ago, after six weeks of hospital care following their birth.