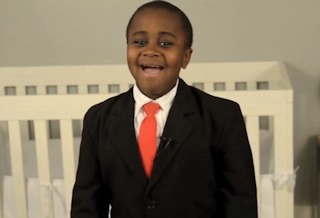 The “Kid President,” of YouTube fame, releases periodic speeches to boost the morale of humanity in general. Sometimes, his messages are directed at specific groups. Here, you can see what he has to say to moms in his Open Letter to Moms (and if you are one, watch it; the kid knows what we need to hear). A few days ago, Kid President released a speech with a target audience of tiny humans: it’s a message to babies on the day of their birth, Kid President’s Letter to a Person on Their First Day Here. “Today, over 360,000 babies will be born. And you are one of them. Welcome, this is the world!”

In the video, he explains that life, in general, is awesome. Acknowledging that there are some bumps in the road of life, he sagely advises that little people not to take the mean people too seriously. Most importantly, he wants the babies to know that “we’re glad you’re here.”  Here are a few morsels of wisdom from the young man to newborns, but be sure to watch the whole video.

“Just treat everybody like it’s their birthday. Even if they don’t deserve it sometimes. Because we all mess up sometimes. The biggest mess up? Not forgiving each other’s mess ups.”

“Being a person is hard sometimes. You should give people high-fives just for getting out of bed.”

“You, you’re awesome. You’re made that way. You’re made from love to be love to spread love. Love is always louder, no matter what. Even if hate has a bullhorn.”

“I don’t think I told you this yet. We’re really glad you’re here. We don’t say that enough to each other here. Because, well, life gets busy. You’re gonna be important. And you’re gonna do a lot, and you’re gonna smell great. But don’t get too busy. Remember to let everybody know you’re glad they’re here. You don’t have to remember all this right now. You’re gonna need a pep talk sometimes, and that’s OK. For now, remember this: You’re awake. You’re awesome. Live like it.”

Kid President made this video for his nephew, Miles. “I’m trying really hard to teach him to be a person. An awesome person.”