The outgoing Health and Human Services secretary, Kathleen Sebelius, leaves an Obamacare train wreck in her wake as she bows out of her current position. This disaster includes a roll-out full of unfulfilled promises, utter technological failure, and deadlines that have come and gone sans tangible action on her part.

Speaking of deadlines that have come and gone, Sebelius is now facing the possibility that she’ll be charged with contempt of Congress because she has brazenly ignored deadlines for subpoenas of Obamacare documentation. And when she did finally turn over the paperwork, she violated the subpoena’s mandate to not redact the information therein. What is Sebelius so afraid of revealing by complying properly with the subpoena? Whatever it is, nearly seven months later Sebelius still has not complied with the order. 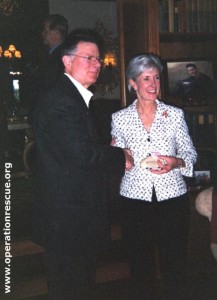 But Kathleen Sebelius’ most inglorious legacy may be that of her consistent stand against the rights to life and religious liberty. Sebelius has a deeply-rooted and long-standing history of anti-life policy and practice in both her public and personal life. In the past, during bids for governor of Kansas, Sebelius has been photographed with two notorious late-term abortionists, the late George Tiller, and Leroy Carhart. In addition to keeping the company of murderers, Sebelius received hefty donations  from Tiller during her campaign (a $200,000 donation earmarked for the defeat of her pro-life gubernatorial opponent).

Sebelius’ support for abortion, and her defense of the HHS Mandate (which has been described as her “baby”) are embarrassingly ironic considering her self-professed Catholicism.  The Archbishop of Kansas City, Joseph Naumann, posited that Sebelius put politics first when she chose to demonstrate fealty to the tactics of an anti-life POTUS rather than to her professed faith:

As the head of Health and Human Services, she reflected the president’s agenda and her own to use the expansion of health care to the poor — a goal the Church has always supported — to expand abortion and promote the use of abortifacients and to coerce the Catholic Church and others to violate our conscience.

Essentially, the Archbishop sums up Sebelius’ entire tenure as a politician when he says, “she was an opponent of every legislation that would protect children or women… She was an advocate of the abortion industry.”