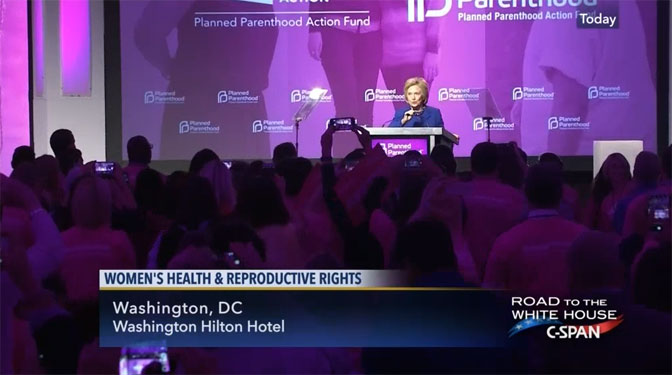 Presumptive Democratic presidential nominee Hillary Clinton chose the Planned Parenthood Action Fund’s gathering to make her first speech. What ensued was a proclamation of unity between the Democratic candidate and the abortion chain — essentially, a Planned Parenthood commercial sponsored by Hillary Clinton. As she addressed the crowd, partially responsible for financially and actively helping her gain the nomination, she promised the abortion-focused audience that as president, “I will always have your back.”

Before Clinton could even take the stage as the Planned Parenthood spokeswoman, the abortion profiteer’s president, Cecile Richards, introduced Clinton. Gushing, Richards claimed that for 100 years, “Planned Parenthood has allowed women to live out their dreams.” She neglected, of course, to note that living those dreams is at the expense of other humans dying — and also neglected to note that many women see that they are doing just fine without Planned Parenthood’s help.

Richards continued to heap praise upon Clinton for helping to expand abortifacient birth control and supporting ‘reproductive rights.’ As the crowd joined the fervor, Clinton joined Richards onstage and the two embraced. “Pink never looked so good,” Clinton said, thanking “my friend and your courageous leader,” Cecile Richards. Clinton added that “Cecile is really is the definition of grace under pressure.”

Clinton then thanked her “Planned Parenthood family” saying, “You made this campaign your own.”

She praised the abortion chain for its resolve to keep its doors open after a host of problems and attacks. One of those “attacks” to which Clinton was likely referring is the undercover videos from the Center for Medical Progress, which stunned the nation in July 2015 by exposing the abortion giant’s willingness to alter abortion technique to harvest fetal organs and sell them for possible profit.

As for other problems, Planned Parenthood has a history of fraud, supporting sex-selective abortion, willingness to cover up child sex-trafficking, failure to report child sexual abuse, dissemination of inaccurate medical information to women, and even lying about providing mammograms. It seems Hillary Clinton is willing to look past the illegal actions and indiscretions of Planned Parenthood.

She portrayed the leaders of the nation’s number one abortion chain  as noble heroes, suffering for their righteousness. With grandstanding emotion, she said she wanted to say something they don’t hear often enough (except maybe from President Obama). “Thank you!”  These thanks extended to praise for the abortion giant, for being there for women no matter their race, economic status, or zip code. Clinton neglected to note that many view with suspicion the abortion chain’s propensity for setting up its centers in poor and minority neighborhoods, disproportionately killing babies based on their race, economic status, and zip code.

Clinton opined about how tragic it would be if the Supreme Court ruling on the Texas HB2 law (requiring abortion facilities to meet the same standard of care as other clinics and to also have admitting privileges at a local hospital) let the law stand. She used this as a basis to remind the audience of “what’s at stake on the Supreme Court,” referring to the appointment of justices. She also praised President Obama for nominating a justice to replace Antonin Scalia, but condemned Republicans for their actions in refusing to confirm him.

Clinton made it clear that a significant part of her agenda is abortion itself, saying, “Defending women’s health means defending access to abortion, not just in theory but in reality.”

She thanked and praised the “reproductive justice leaders in this room and across America.” And lest there be any doubt about the alliance Clinton will have with Planned Parenthood if she is elected president of the United States, Clinton said, “I will be your partner in this election and in the long haul.”

To that, the crowd, donned in Planned Parenthood pink, chanted her name in a unified mass of abortion praise: “HILL-A-RY! HILL-A-RY!”