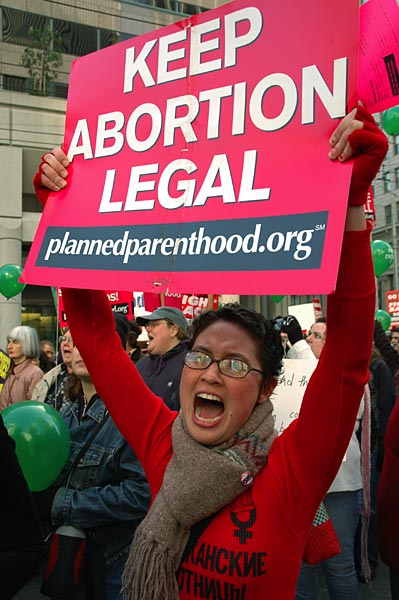 Pro-choice author Anne Eggebroten, edited a book entitled Abortion: My Choice, God’s Grace which tells the stories of Christian women who had abortions. The book celebrates abortion as an acceptable choice and tries to justify it based on the Bible. There is one story in particular I want to comment on.

It is a first-hand account of a pro-choice clinic escort who describes how she got involved in the pro-choice movement. I think what she said is worth considering:

My participation in the pro-choice march was motivated by boredom and restlessness as much as by a desire to be of service. I had thought about getting involved in some kind of cause, but I didn’t know which one. Having been too young in the 60s to participate in the peace movement, I look forward to attending a real political march. I didn’t attend the antichoice march held the same day because the newspaper letters to the editor with “pro-life” views seem too cold, uncaring, and judgmental; one letter even said that any woman who died from an illegal abortion deserve to die.

At the March, bombarded with pro-choice rhetoric, she embraced the pro-choice cause full heartedly:

One woman speaker at the post-March rally asked for volunteers to assist clients entering the Women’s Health Organization, the only women’s health care facility performing abortions in northeastern Indiana. First trimester abortions are performed at this clinic by an out of city physician (any local doctor doing abortions will be blackballed by the community in Fort Wayne, known as “the city of churches”). As coordinator of clinic defense, the woman arranged for escorts to help those with appointments get past the antiabortion protesters. The escorts, both men and women, were volunteers with no official connection to the clinic. From her speech, escorting sounded like an exciting kind of service: necessary, different, dangerous, and more stimulating than stuffing envelopes. As a Christian, I also felt an obligation to work for justice and equality.

She now spends her time at the clinic trying to prevent pro-lifers from reaching abortion minded women and helping them find better options. This is a sad story. This woman was obviously not educated about abortion through her church. That is a shame. This initial lack of knowledge about abortion left her wide open for conversion by the pro-choice movement. She seemed to join the pro-choice movement almost on a whim, and did not start from a position of support for abortion.

Sadly, it was the insensitive, cruel, and condemning comments from pro-lifers that drove her away from the pro-life movement. One wonders whether she could have ended up on the other side of the picket line if pro-lifers had not alienated her by their unkind and harsh words.

There is a moral to take away from this story. Pro-lifers need to be careful how we present ourselves. If we express judgment, anger, and condemnation towards those who are pro-choice and those who have had abortions, we will drive people away from the movement. Before you leave that angry, nasty comments on a pro-choice Facebook status, please think about this story and reconsider. We need to conduct ourselves in a respectful and compassionate manner, or we will drive people away from the movement and right into the pro-choicer’s arms.